Photographer and writer, except where noted: Christina Wilkinson

The Benjamin Rosenthal Library at Queens College features a distinctive clock tower. Walt Whitman taught school on what would later be the Queens College campus.

“Paumanok” was a word used by the Algonquin tribe to describe Long Island. The exact meaning is unclear, although William Wallace Tooker, a 19th-century expert on the subject, thought that it meant “land of tribute.” Other translations have included “fish-shaped” and “land where there is traveling by water.” 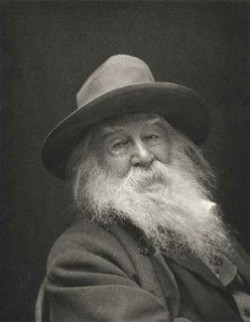 Walt Whitman (1819-1892) is best known as the author of the classicLeaves of Grass, published in 1855. A favorite subject of Whitman’s, Long Island frequently found itself the focus of his poems. He often referred to it by its original name in his works:Starting from PaumanokFrom Paumanok StartingA Paumanok Picture 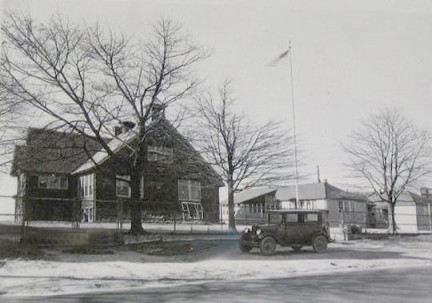 It may be surprising to learn that Walt Whitman lived in Queens for a time (1839-1841) and briefly taught at a school called Jamaica Academy. Built in the early 19th century, it was located along Flushing-Jamaica Road, which later became Kissena Boulevard. The school became public in 1844.

In the first decade of the 20th Century, the Parental Home for Boys was constructed on the surrounding land, opening in 1909. This was where the truant and delinquent lads of Queens were sent to be reformed. The school’s unique Spanish-style buildings were named after letters of the alphabet. The one-room schoolhouse, now located on the grounds of the Home, stayed open until 1935. 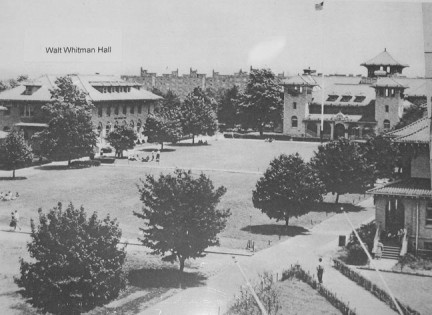 In 1937, Queens College took over the Parental Home grounds. Eventually, the one-room schoolhouse was demolished. In 1939, the “A” Building, which housed the English Department, was renamed the Walt Whitman Building. It subsequently became the Walt Whitman Museum. It was torn down in 1955 when the school decided that they needed a bigger building, and replaced it with Paul Klapper Hall (named after the college’s first president). The museum has since been relocated to Whitman’s birthplace in Huntington. 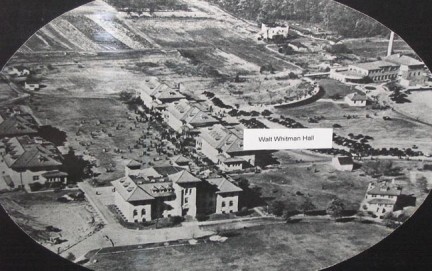 Most of the other Parental Home buildings have survived. Pictures of these and other interesting campus scenes are on display in my Queens College photo album. For an interactive map which details the history of each building, take a gander at the Queens College Campus Map. 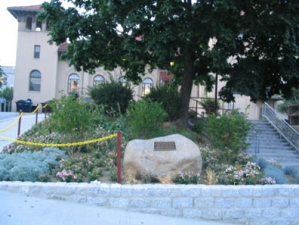 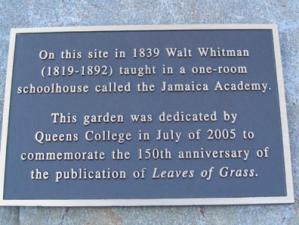 The Student Union now sits on the site of Whitman’s schoolhouse. 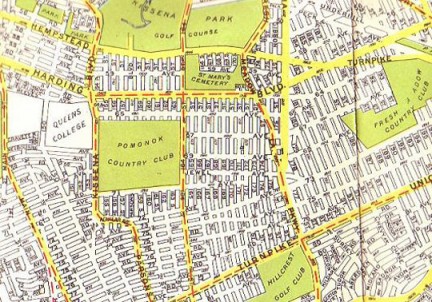 As can be deduced from this 1930’s-era Geographia map, the hilly areas surrounding Queens College were once a golfer’s dream. All of the courses which appear on the map are now gone with the exception of the Kissena Park Golf Course. St. John’s University moved into the Hillcrest Golf Club in 1939. The Fresh Meadow Country Club had quaint garden apartments built upon it by 1950. 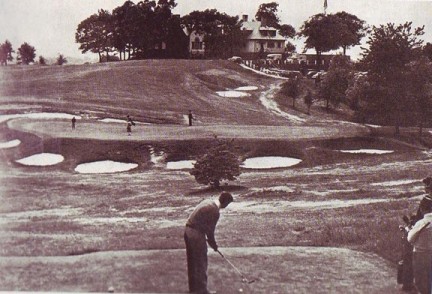 The course just across the street from Queens College was called “Pomonok” – a variant spelling of the Algonquin name for Whitman’s favorite place. The course was built by members of the Flushing Athletic Club, which began in 1886 as one of the first golf clubs on Long Island. They leased 83 acres of land along Northern Boulevard in Flushing. When their lease was set to expire in 1919, some members favored finding a new, larger site that had room for an 18-hole course. Others favored renewing the lease at the original site and gradually expanding their 9-hole course. The membership ended up splitting, with the bolting members forming the Pomonok Country Club along Kissena Boulevard in 1921. [The Flushing Athletic Club did eventually expand their course to 18 holes, but the club didn’t make it past the 1920’s.]The Pomonok Country Club was famous for having female caddies and for hosting the 1939 PGA Tournament during the World’s Fair. The above photo is a shot of the 17th green with the 18th hole and clubhouse in the background.Becoming a club member in the 1920’s required one to purchase a $900 share of stock and pay an initiation fee of $250. Annual dues were $150. It’s no wonder that the surrounding neighborhood soon adopted the prestigious name of Pomonok. 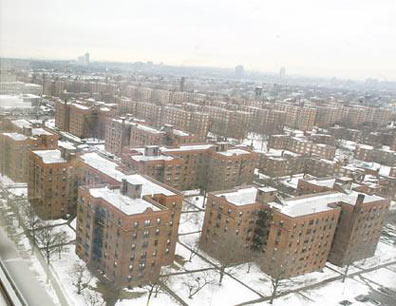 The Club survived until 1949 when its members made a decision to disband and sell the property. Part of it became the Electchester Homes, middle-income housing built by Harry Van Arsdale, Jr., president of Local 3 of the International Brotherhood of Electrical Workers. Another part was managed by theCity Housing Authority who built the Pomonok Houses (left), among other developments. Parsons Boulevard and Jewel Avenue (now renamed for Van Arsdale) were extended across the land, right through the site of the former clubhouse. photo from NY Times

The community of Pomonok today consists mainly of these major housing developments and small attached homes. This may not sound like much to look at.Until you see this:

If Walt were alive today, would he be inspired by such a scene?My guess is yes.Have modern day poets been inspired by it?The answer is most definitely.Words for Queens College by Stephen Stepanchev, First Poet Laureate of Queens 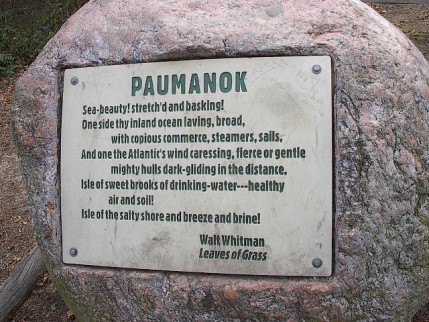 Jaynes Hill, the tallest hill in Long Island, is a short distance from Walt Whitman’s birthplace in Huntington, Suffolk County. Both the Long Island Sound and Atlantic Ocean are visible from its 400-foot summit. Though Whitman and his parents moved when he was just four, Whitman was drawn to this part of the island and wrote about it often. This passage from Leaves of Grass appears on a plaque affixed to a large boulder, deposited by a glacier, at the summit of Jaynes Hill. photo: Eric Weaver

The photographs for this page were taken on September 19, 2004 and August 3rd, 2005, and this page was completed on January 4th, 2006 by award-winning Forgotten New York correspondent,