SCHRAFFT’S and other ancient signs

Your webmaster has to admit, I’d never been to Schrafft’s, Chock Full O’Nuts, or the Automat. As a matter of fact, I can only recall being in a McDonald’s before age fifteen once, and I had to leave NYC to do it. As incredible as it might seem, the golden arches didn’t really have much of a presence in NYC until the mid-1970s, being mainly a suburban chain till then. I’m in Starbucks now and again, but only in summer, for the iced tea, which they adamantly refuse to provide lemon for (can anyone explain that for me)? All this irrelevant info about my lunch and breakfast habits was prompted by FNY Correspondent Gary Fonville’s latest batch of hidden, obscure signs, one of which is from a long-forgotten Schrafft’s on Smith Street. After adding to Gary’s collection with some others I had lying around, I’d say we’ve put together a rather less boring than usual ForgottenPage. See what you think. 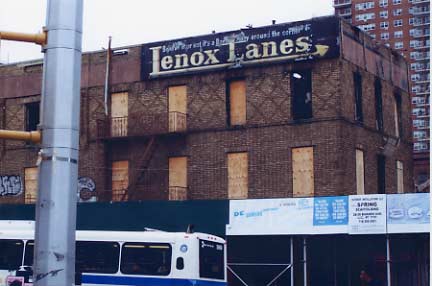 Lenox Lanes. Once a popular bowling alley that has been shuttered for more than twenty years. The arrow points to its former location on 146th Street. Location: NW corner of Lenox Avenue & 145th Street.

O’Jays TCB Telephone Service. This business was active in a pre-answering machine age. It was owned by Eddie O’Jay, a popular DJ who worked at WLIB and WWRL here in NYC. The popular R&B group the O’Jays were named after him. Before O’Jay worked on radio here in NYC, he was a DJ in Cleveland, Ohio. A fledgling group called the Mascots from Ohio renamed their group in honor of him. Location: NW corner of 145th Street & Amsterdam Avenue, Hamilton Heights, Manhattan.

Since this picture was shot, this Ex-Lax sign has almost disappeared. It’s now covered by an awning, but can still be seen by peeking under it at the SW corner of Franklin Avenue & St. John’s Place, Crown Heights, Brooklyn

(Ex-Lax, despite a carcinogen scare in the 1990s, is still to be found on drugstore shelves. It was first produced in 1906)

These types of stores were once plentiful in NYC. In those days, ice cream was primarily purchased and consumed at fountain stores. FNY’s ever present camera captured this store with a little surprise. On the left side of the sign is segment that’s peeled back. Upon closer examination, it reads Du’Val Ice Cream . The space now serves as a bodega. Location: SE corner of East Tremont & Belmont Avenues, Tremont, The Bronx.

LEFT: Typewriters. This business is a victim of changing technology. Typewriters were omnipresent. Because of computers, they have almost disappeared completely.

LEFT: This type of baked enamel sign was almost everywhere at one time. Before its breakup in 1984, the Bell System had a near monopoly on long distance service. It morphed into the American Telephone & Telegraph Company, now better known as AT & T. Location: Utica Avenue near Carroll Street

(Local service was handled by New York Telephone, Nynex, Bell Atlantic, and currently Verizon; another name will come along sooner or later.–your webmaster)

Brooklyn was the home to many candy factories. Its unionized workers who were represented by the Candy & Confection Workers Local 452 AF of L which had its offices at Vanderbilt Avenue near Lafayette Avenue, Clinton Hills, Brooklyn.

Edwin B. Stimpson Co. Nature of former business is unknown. Location: Flushing Avenue near Franklin Avenue, Brooklyn.
LEFT: Forgotten Fan Bill Newkirk: Stimpson made hardware, like nuts, bolts, washers etc. My aunt gave me a small bag of eyelets when I was a kid. I’m not sure when this happened, but the plant was broken into when it was closed. Vandals trashed the place throwing boxes of hardware parts in the street. After that Stimpson left the area and moved to Bay Shore if I’m not mistaken. My aunt said the company had a shuttle van for Brooklyn residents like my aunt to be shuttled back and forth from Brooklyn to Bay Shore.

RIGHT: Thompson’s. Nature of former business is unknown. Now houses the electronics emporium J&R Music World. Location: Park Row near Beekman Street, Lower Manhattan.(This is the pick of Gary’s litter. It is reminiscent of the century-old Treffurth’s sign at Broadway and Waverly in the Village.–your webmaster)

Thompson’s, of which your guy says business unknown, was a chain of cafeterias.They had no tables, but funny chairs, one arm spread out to be a table. Like the chair-desks you got in college. If you were left-handed you were out of luck.

Thompson’s was originated by restaurateur John R. Thompson in Chicago in the 1890s; in 1950, a Thompson’s in Washington, DC was the site of a successful suit brought against it by civil rights groups opposing the restaurant’s whites-only policy.

LEFT: Howard Clothing. This company once was a major clothing retailer with a large advertising presence in Times Square. Located near the Brooklyn side of the Manhattan Bridge at Flatbush Avenue Extension & Concord Street. This building probably served as its warehouse and executive offices.

(There’s also the remnants of a neon sign on top of the building with just a couple of letters left, like the Trum sign in Red Hook)

(This one is DEwey) 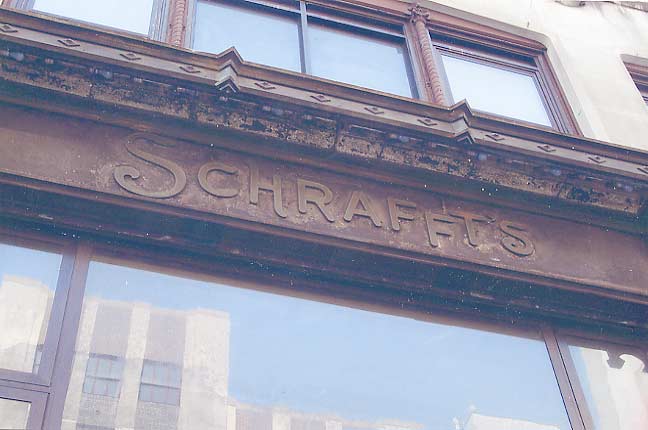 Everybody went to Schrafft’s. Kirk Douglas as a young struggling actor worked as a waiter in a Schrafft’s. Movie stars, politicians, even Presidents (Truman) stopped into Schrafft’s. Truman Capote got thrown out of Schrafft’s (more than once) for being a nuisance to the clientele (joking around irreverently and laughing too loudly). James Beard admired “the precisely trimmed egg salad sandwiches. Mary McCarthy ate them. E.L. Doctorow’s character “Billy Bathgate” ordered the crustless chicken sandwiches at a Schrafft’s where he and his mother joined “all the fine people in the Bronx.” Authors often placed their characters in Schrafft’s, and often noting the specific choices on the menu because those were famously delectable to millions of New Yorkers and out-of-town visitors. David Columbia [New York Social Diary]

And Just a Few More

I have been saving up some vintage ads from locales about town, and this is the perfect opportunity to use them…

RIGHT: across the street.

I took the next batch the afternoon of my radio appearance with Brian Lehrer on WNYC October 23, 2006. The M train to Ridgewood is under the Municipal Building, where the station is located, and I had some time to slaughter.

LEFT: What drew my attention here wasn’t completely the rusted K&D Leather & ???nding Co. sign, which is from the first half of the 20th Century, but the small sign on the right, Anita’s Aerobics, showing some kind of animal in a 1980s exercise outfit. We’re far enough from the 1980s now that its iconography looks somewhat antique. Platform at Broadway-Myrtle station.

RIGHT: Randel Grocery, Catalpa and Woodward Avenues, Ridgewood, Queens. The grocery has retained its earlier stencil “Woodward Dairy” sign. Your dyslexic webmaster originally saw it as “Woodward Diary” which would, now that I think of it, be a perfectly good name for a weblog.

Morscher’s Pork Store, Catalpa and Woodward Avenues. This neon sign was replaced in 2010, but thankfully, the German script remains.

Forgotten Fan Laura Healy: “Tischlein deck dich” roughly translates to “Little table, set yourself” but has no meaning, really, outside of its context within the story from the Brothers Grimm, Tischlein deck dich, Goldesei und Knüppel aus dem Sack (“The Wishing Table, the Gold Ass, and the Cudgel in the Sack”). You could also translate it as ‘the magic table’ – that would explain its use today by catering services and restaurateurs.

Forgotten Fan Irving Douglas: That charming German sign that says, “Tischlein Deck Dich” refers to the Grimm tale, “The Wishing Table, the Gold Ass, and the Cudgel in the Sack.” The sign literally says, “Little table, spread yourself!”

Here’s a quotation from part of the tale:

“It came to pass that on his way home, he came one evening to an inn which was filled with guests. They bade him welcome, and invited him to sit and eat with them, for otherwise he would have difficulty in getting anything. “No,”answered the joiner, “I shall not take the few morsels out of your mouths. Rather than that, you shall be my guests.” They laughed, and thought he was jesting with them. He but placed his wooden table in the middle of the room, and said, “Little table, spread yourself.” And all kinds of food and drink appeared on it!”

RIGHT: Tavern, Catalpa and Forest Avenues, Ridgewood, Queens. The “dolly varden” is a species of trout; Dolly Varden is a character in the Charles Dickens novel“Barnaby Rudge;” and Dolly Varden is also a rock group from Chicago.

But what Dolly Varden was the bar named for?

LEFT: Southern Boulevard, East Tremont, Bronx. “Taste that beats the others cold, Pepsi pours it on” was a Pepsi campaign slogan in the Swingin’ Sixties. jeffrey morris

Coca-Cola was invented and first marketed in 1886,followed by Pepsi in 1898. Coca-Cola was named after the coca leaves and kola nuts John Pemberton used to make it, and Pepsi after the beneficial effects its creator, Caleb Bradham, claimed it had on dyspepsia. For many years, Coca-Cola had the cola market cornered. Pepsi was a distant, nonthreatening contender. But as the market got more and more lucrative, professional advertising became more and more important. These soda companies have been leading the way in advertising ever since. [Coke and Pepsi Cola Wars]

Great old-skool handpainted grocery sign and old 7-Up logo, Madison Street near St. James Place, Manhattan. The store has closed since it was photographed in 2007.