MARVELOUS NIGHT for the Moondance and Victory Diners

Is there anyplace more inviting than a classic railroad-car diner? It’s a matter of taste of course, in more ways than one. I’d eat in one every day, but my cholesterol is high enough as is. In future centuries, we’ll have figured out a way to make eating vegetables and incessant exercise unnecessary, but until that day comes, diners will have to remain an infrequent destination for your webmaster.

Diners are becoming an infrequent destination in Manhattan and to a lesser degree, the other boroughs, as real-estate developers covet their air rights. Diners are one-story buildings in areas zoned for skyscrapers. We have already lost all three of the diners on 11th Avenue between 37th and 49th: The River, the Market and the Munson.

None can say with precision how old the Moondance, on 6th Avenue and Broome Street is; most accounts have it here as early as 1933, making it the oldest freestanding diner in the city. There wasn’t even a 6th Avenue here until 1928 when it was rammed through as a conduit under which the 6th Avenue IND subway would run. It was originally known as the Holland Tunnel Diner (the tunnel mouth is a block away on Varick). The railway car-inspired diner retains several original and/or distinctive elements; chrome detailing, a barrel roof ceiling, wrap-around windows, counter & stools, as well as a famed retro revolving moon sign by the late architect/designer Alan Buchsbaum & designer/signmaker Jim Rogers. Photos: Michael Perlman

After decades as a somewhat humble greasy spoon, restaurateur Larry Panish upgraded the decor and menu in the 1990s without sacrificing a classic diner feel before selling in 2001. Diner owners, The Extell Group, was set to demolish the diner and construct a high ride condo in its place. However, concerned citizens spoke up: Michael Perlman, Queens preservationist & founder of the Committee To Save The Moondance Diner, and Kyle Supley, Brooklyn preservationist, immediately joined forces & campaigned to save the diner, when its fate was in limbo earlier this year.

Extell donated it to the American Diner Museum, which, in turn, sold it to Vince and Cheryl Pierce of LaBarge, Wyoming, where it will serve a population of five hundred plus and a growing tourist industry. It is set to move cross-country the first week of August, 2007. photos: Laura Goggin and American Diner Museum

A massive condominium/restaurant has taken its place in 2011.

A Victory for the Victory 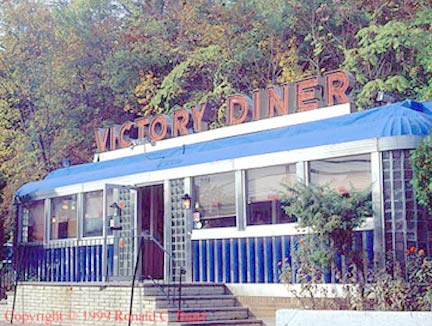 It was almost a lock that the Victory Diner, Richmond Road and Stobe Avenue in Dongan Hills, Staten Island, would be torn down as well after its longtime owner, Maria Pappas, retired after over 30 years and sold to developer Leonard Tallo. But the Victory wouldn’t die. Tallo creditably held off demolition until the American Diner Museum could find a buyer.

The Victory Diner is a classic example of the 1947 Kullman Dining Car Company of New Jersey “Challenger Model” diner unit with glass brick flanking the front doors and corners and exterior blue fluted porcelain enamel panels. It originally stood on Victory Boulevard in Castleton Corners (hence the name) but in 1964 it was moved to Dongan Hills. Scenes from Rodney Dangerfield’s “Easy Money” were filmed here, and Willie Sutton worked in the Victory as a cook while on the lam after breaking out of a Philly prison. photo: Ronald Saari

The Richmond County Savings Bank Foundation put up $10,000 to buy the diner from Maria Pappas, and the newly created Staten Island Community Preservation Conservancy, a nonprofit established by Borough President James Molinaro and developer R. Randy Lee to preserve endangered buildings and open space, will contribute the approximately $20,000 necessary to move the diner to Ocean Breeze. The restaurant will eventually sit in an area located at the end of the FDR Boardwalk and the start of the Midland Beach promenade, near Freedom Circle and at the foot of Seaview Avenue. Staten Island Advance

Your webmaster never got the chance to eat at the Moondance, but I’ve been in the Victory a number of times and the food, like at most diners, was excellent and filling. A sun-filled room, vinyl seats, swivel chairs, friendly wait staff and great food…

Update: Unfortunately the Mooondance Diner was put up for sale again by its Wyoming proprietors in 2012, and the same year, the Victory was a Sandy casualty.