ALERT! The world scientific community will be forced to acknowledge the existence of a “living fossil” as a creature thought to be extinct for 80 million years recently appeared in a swamp in southern Brooklyn.

The plesiosaurs were a group of large marine reptiles that possessed extremely long necks and tails. They roamed the open surface waters of the sea feeding on the abundant schools of fish and small reptiles. They competed for this food supply with the mosasaurs, [ancient] crocodiles, and sharks. Interestingly, plesiosaurs become very scarce in the fossil record before the end of the Late Cretaceous while the mosasaurs (temporarily) and crocodiles become more abundant. This may suggest the more ancient plesiosaurs, that where around since the Jurassic, were becoming outclassed by the newer types of mosasaurs, modern types of crocodiles, and sharks. NJFossils

Though plesiosaurs have often been thought of as dinosaurs, they are large, waterborne reptiles (specific biological traits separate the dinosaurs from other reptiles). Evolving from smaller reptiles that foraged besides lakes and streams, the plesiosaurs have, much like our modern day whales, become completely adapted for water life; though they have kept limb digits, they have lengthened, fused together, and become paddles. Therefore, they cannot come on land; they mate in the water and give birth in an ovoviviparous fashion, ie. their eggs hatch within the mother’s body and young are swimming from birth. photo: Oceans of Kansas

It was ForgottenFan Brian Black who shocked the world and snapped these historic photos in Marine Park in southern Brooklyn. In his words, it was “as cold and overcast as a Scottish spinster” on that historic morning. Black took no chances and hid behind a copse of fir trees and got the first photographs of a plesiosaur ever taken. The plesiosaur diet has been thought to be mostly fish; it’s not known if they are man-eaters.

These reptiles can grow to a length of 46 feet in some species. This one was obviously a juvenile. 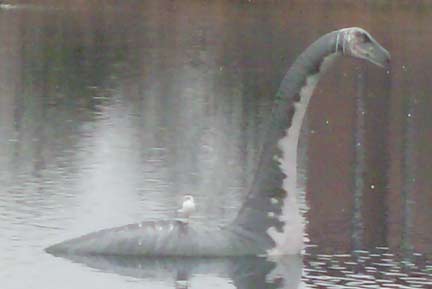 Brian Black and Forgotten NY stand on the shoulders of giants. Cuvier. Darwin. Mendel. The mantle of fame can fall on some reluctant and unworthy shoulders. As we announce this incredible discovery to the world, we can only hope that it will not be used to its detriment.

UPDATE: Forgotten NY has learned this is an inanimate sculpture installed by Ridgewood artist Cameron Gainer.

WITHERING MYRTLE. The last days of the Myrtle Avenue El.