BEHIND THE GRAY DOOR: historic relic at Greater Astoria

The Brooklyn Museum recently donated a colonial relic to the Greater Astoria Historical Society — a door that was part of the historic Blackwell Mansion in Ravenswood, Queens, likely built in 1730 by patriarch Jacob Blackwell (1692-1744).

After the Battle of Brooklyn (aka the battle of Long Island) in August 1776, the British and Hessians swept into Queens from the south and east. Upon their arrival in Astoria (not yet named as such), in September 1776, Colonel Jacob Blackwell had to flee. The British hacked the “Arrow of Confiscation” into his front door, making it the property of the crown. This arrow marking still exists in the door’s exterior. Jacob Blackwell returned to the house and lived there through the worst of the British occupation, and died there in October 1780, still a British subject in a land not yet the independent United States. 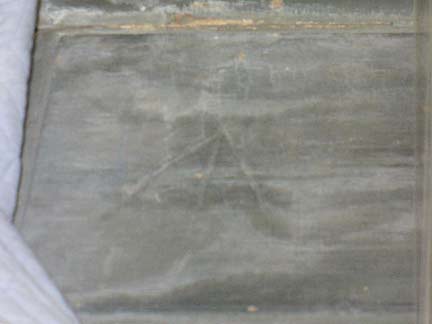 In the 1820s the Blackwell house and property were owned by Colonel George Gibbs, “the father of Ravenswood”.

James Fenimore Cooper, the famous American novelist and a friend of Col. Gibbs, spent time at the old stone house in 1825. Cooper worked on the outlines of his novel, “The Water Witch” or “Skimmer of the Seas” during his stay. This is significant in that Cooper wrote about dueling ships racing up the East River and through the treacherous Hell Gate, a narrow channel filled with rocks, reefs, currents, and tides. Gibbs’ Point is shown on old maps as just south of Hallets Cove.

ABOVE:  “Arrow of confiscation” carved by British troops after taking over western Queens in 1776 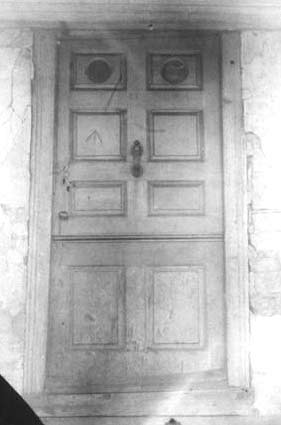 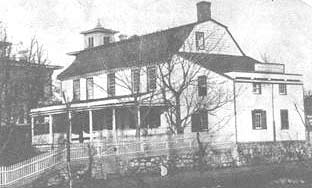 The Blackwell Mansion and its door, ca. 1900. Note the arrow, upper left side.

The Blackwell House was a boys’ boarding school from 1845-46, a picnic grove/park in 1882 and was occupied until its demolition in 1901. Keyspan’s Big Allis power plant now occupies its site.

The door was part of the house from about 1765 to its demolition in 1901. It was rescued by the prominent Tisdale family of Astoria, who may have displayed it or stored it at their lumber yard on the Astoria peninsula from 1901 to 1951. James Tisdale donated the door to the Brooklyn Museum in 1951. The door may have been exhibited for a time at the (Rufus) King Manor in Jamaica, Queens. The Brooklyn Museum has had possession of the door from 1951 until December 3, 2007.

Allison Galland of the Brooklyn Museum, assisted by Chrisy Ledakis, and a colleague named Robert, met Greater Astoria Historical Society representatives at the off-site warehouse and facilitated the transfer process in a professional and expeditious manner.

On Dec. 3rd, 2007, GAHS trustees Matt LaRose, Richard Melnick, and, with a van from the IBS Services Group (ably driven by a man named Bruce) picked up the door from an offsite Brooklyn Museum warehouse and transported it to its new home, the Greater Astoria Historical Society in LIC, where it is presently exhibited.

TRINITY BRIDGE and its predecessor

JOLLY ON THE SHORE: a bit of Bay Ridge’s Shore Road

[…] as interesting followup to our article about the old knocker from the door to the Blackwell House that Maud Stoutenburgh Eliot gifted to President Roosevelt, we present this bit of correspondence […]