The New York City subway system was planned with a lot of standardization. Standardization was very practical for subway planners and financial backers: if each station was custom designed, costs would have risen exponentially. As a result, wall tiles, entrances, support columns, construction techniques, lighting techniques and kiosks (for the IRT) were basically similar. But often due to a station’s physical location, standardization went out the door. 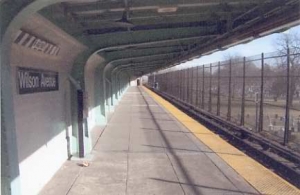 RIGHT: A truly unique station at Wilson Avenue on the L line. Engineers were faced with a challenge at this location. The line had to be squeezed and between a rail line and a cemetery. The Manhattan-bound platform gives the impression that it’s underground. It’s not: it’s at ground level. The upper level directly faces a cemetery — Trinity Cemetery: it ranks as the most serene station in the system.

Nice single point perspective by the way –your webmaster 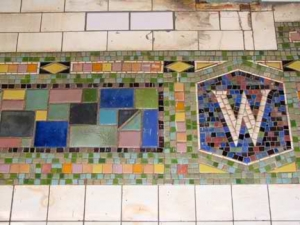 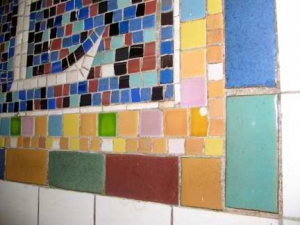 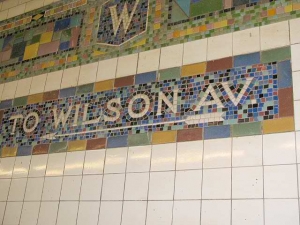 Admittedly, the Wilson Avenue station (at Wilson Avenue and Moffat Street in Bushwick) isn’t the prettiest place in the world to wait for a train, at least in the Manhattan-bound underground section; plaster drips off the ceiling, and it’s dank and musty whatever time of year.

Yet, it was one of the last BMT stations built, in 1928, and it seems that Squire Vickers and company threw conservatism to the wind and got every color of the rainbow involved in the mosaics. Usually BMT stations used a limited palette.

IND stations, which were already under way when this station was finished, were decorated on a different plan using monochromaticism in each station. 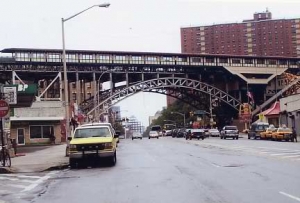 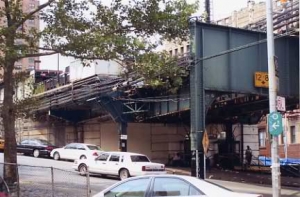 LEFT: The original IRT’s only elevated system. The location for this station would have been a challenge for the IRT’s engineers. Manhattan’s topography required a solution that wouldn’t be costly. Trains would have had a tough time negotiating the valley that exists between 135th and 120th Street on Broadway. Instead, to make it easier for the trains to travel along this stretch, a viaduct was constructed. As a result the tracks remained level between the stations directy south and north of this station at 125th Street & Broadway, Manhattan.

RIGHT: Again Manhattan’s topography created a challenge. Just south of Dyckman Street on the 1 line, the grade level changes abruptly. Engineers decided it would be easier just to built the station in a hybrid manner. It’s the system’s only station that partially on an elevated structure and partially at the portals of a tunnel. 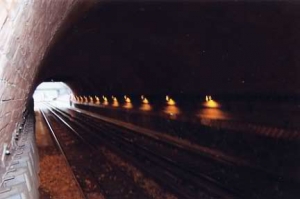 ABOVE: Possibly the oldest tunnel in operation in the subway system. It was constructed in 1878 as part of the old Brooklyn, Flatbush and Coney Island Railroad. In addition, it’s possibly the system’s only brick-lined tunnel still in use. The bricks have been pointed and cleaned to create a striking view. Can be seen from the northside end of the Botanical Gardens station on the Franklin Avenue shuttle.

ABOVE RIGHT: An Art-Deco masterpiece that has seen better days. This neglected beauty graces the IND on the west side of West 147th & St. Nicholas Avenue, Manhattan. Dates from the IND’s opening in 1932.

Two eras of MTA typography can be seen here too: above the entrance, the International Style featuring sanserif letters (specifically Akzidenz Grotesk (Standard Medium), introduced ca. 1970 by Unimark and designer Massimo Vignelli, and below, the later version with Helvetica. 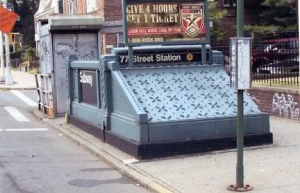 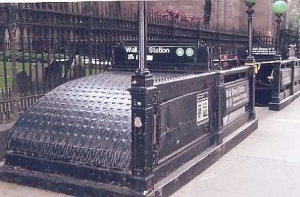 Most of these fancy entrances have been replaced by more utilitarian ones. 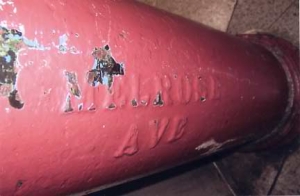 LEFT: Melrose Avenue. Was probably renamed Third Avenue as it gained more prominence than Melrose Avenue. This customized column is very easy to miss. It’s on the downtown side immediately next to the turnstiles…Third Avenue station on the 4 & 5 lines in the Bronx. 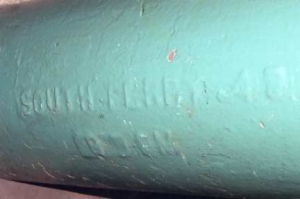 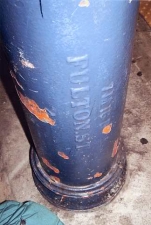 ABOVE LEFT: South Ferry on the 1 line. CENTER: Fulton Street. At back of station of downtown side of Fulton Street station serving 4 & 5 lines.

ABOVE RIGHT: This support column is indeed a rarity. Not only is the station’s name on the column, but it’s also on the floor! Hoyt Street station on the 1 & 3 lines in Downtown Brooklyn, Brooklyn.

(The names on the platform were likely placed there as part of station renovations in the very early 1980s). 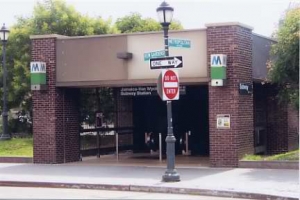 LEFT: One of the subways’ newest stations at Jamaica-Van Wyck in Queens. It’s barely twenty years old. Its uniqueness is based on the fact that it’s the only station where the E train doesn’t share a station with another line. The E shares stations along its route with the A, B, C, D, F, G, J, N, R and V lines.

(Note the rare use of a Type B Henry Bacon park post as a streetlight).

RIGHT: These spindly columns support a structure dating from the 1880’s on Fulton Street. This represents the oldest continuously used elevated structure in the system. Near Alabama Avenue station on the J line. Subway planners tried to place stations at least walking distance from one to another. Due to geography, these two stations (Howard Beach and Broad Channel on the A en route to the Rockaway peninsula) are spaced 3.5 miles apart, making them the two stations that are spaced the farthest. LEFT: A rare sight these days can be seen from the downtown 33rd Street Station on the 6 line. Possibly dates from this line’s 1904 inaguration.

RIGHT: A few years ago your webmaster spotted a similar sign on the uptown #1 at Cathedral Parkway. Not sure if this one survives. ABOVE: Didn’t Bell Atlantic’s name disappear and morph into Verizon? Can’t tell by this pay phone at the Nostrand Avenue station on the 2 & 5 lines.

RIGHT: Superman might find this booth comfortable. This 1948 IND station notified passengers of a pay phone with tile and not a sign attached above. Mezzanine at Liberty Avenue Station in East New York, Brooklyn. LEFT: The MTA missed this one at a crossover at the Borough Hall station in Downtown Brooklyn, Brooklyn. This sign is definitely not ADA (American with Disabilities Act) compliant!