Those who live in or who’ve been to Atlanta say that an inordinate amount of streets are called Peachtree; in Manhattan, meanwhile, there are 6 streets called Broadway, and all five boroughs, for that matter, have a Broadway.

In NYC, all Broadways are a hommage to the original that begins at Bowling Green and runs up the center and western parts of Manhattan island and, as Route 9, goes almost all the way to the US border with Canada.  Brooklyn’s Broadway runs from Williamsburg through Bushwick to East New York, and is under an el most of the way; in the Bronx, Broadway is a northern extension of Manhattan’s; Queens’ Broadway goes from Ravenswood, Long Island City to the heart of Elmhurst at Queens Blvd. and Grand Avenue; and in Staten Island it’s a two-lane road, moderately trafficked but not a main artery, in West Brighton and Livingston.

Manhattan’s six streets with Broadway in their names include one of the longest roads in North America as well as Manhattan’s last unpaved path (Broadway Alley between East 26th and 27th west of 3rd Avenue). Broadway Terrace in hilly Fort George in northern Manhattan runs from Fairview Avenue to West 193rd a block east of the namesake; Old Broadway, a remnant of the old Bloomingdale road in Harlem; and then there’s East and West Broadway.

At one time both streets had their own identities; East Broadway, which runs from Chatham Square in Chinatown northeast to Grand Street on the Lower East Side, was once known as Harman Street, and today’s feature, West Broadway, is an amalgam of several streets: College Place, Chapel Street, Laurens Street, and South Fifth Avenue. Chatham Street was changed to East Broadway in about 1831 and West Broadway received the designation about 10 years after that.

The reason the Board of Aldermen, or whoever was naming streets at that time in history, decided to make these streets pay homage, genuflect to, or bask in the reflected glory of the erstwhile Great White Way, the Greatest Street in the World, is not fully known.

Today, West Broadway runs from Vesey Street north to West Houston, where it becomes LaGuardia Place for a few blocks before ending at Washington Square Park. It once plunged into the park to connect with 5th Avenue (and some of West Broadway was renamed South 5th for a while) but the connection was severed in the mid- 20th Century; Robert Moses was always proposing a revival of that link, but it was finally defeated in 1969. While the construction of the World Trade Center from 1968-1974 eliminated many streets and parts of others, West  Broadway always began at Vesey and Greenwich Streets, and so none of it was ever de-mapped.

There is a vast difference from the West Broadway in the early 20th Century and the present one: from the 1880s through about 1936, West Broadway was shrouded and sooted by the Sixth Avenue El, which ran over it from Murray Street north to West 3rd, where it jogged west to 6th Avenue. Since 1918, the IRT Seventh Avenue line has run under West Broadway from Leonard to Vesey Streets, so for almost 40 years, the avenue had both a subway and an el.

As it happens Murray Street is where I began my northward way along the spine of today’s Tribeca and Soho on Saturday, April 26, 2008. 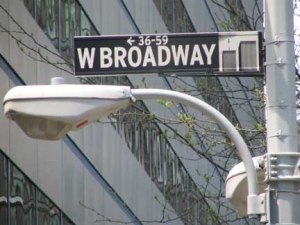 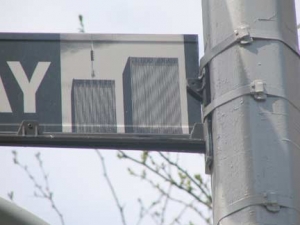 The World Trade Center is remembered in Downtown Alliance street signage. The lower Manhattan business and tourism promotional organization, in the early 2000s, installed black and white street signage designed by Cooper Robertson and Partners, as well as new lightposts and area maps. The street signs, in particular, are the best latterday street signage I’ve seen, with large letters and a black-and-white photographs of local buildings and landmarks. (Someday, I’ll walk around downtown and list every one.)

The Alliance wisely decided to retain representations of the Twin Towers on street signs after their destruction. 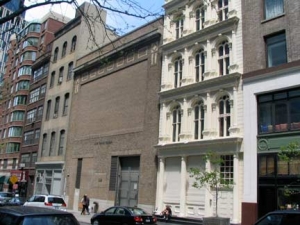 A study in contrasts at 75-77 Murray Street: an 1857 cast-iron marvel built by the king of the genre, James Bogardus himself (see below). It was originally occupied by the Hopkins brothers, Francis and John, for their glassware business.

I don’t have a closeup of the 3rd and 5th floors, but the arched windows on those floors are embellished by representations of Medusa, the snake-haired monster of Greek myths.

Next door is a much more austere brick MTA substation. 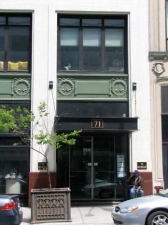 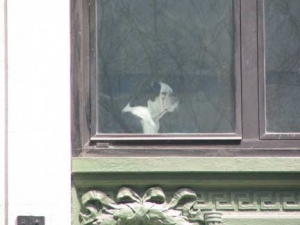 How much is that doggie in the window at 71 Murray? I suspect he or she’s not for sale. 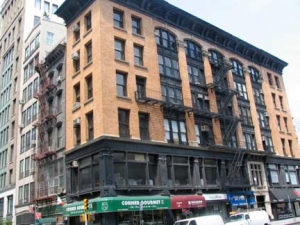 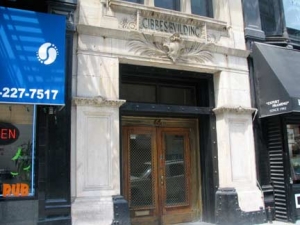 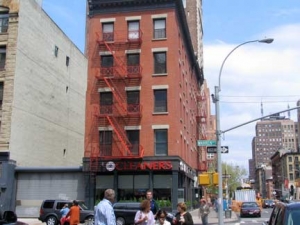 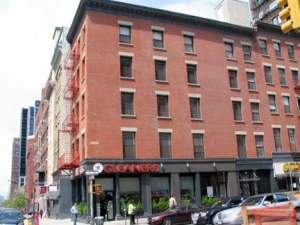 On the West Broadway side of the handsome brick building at the NW corner of West Broadway and Warren Street is a reminder of one of West Broadway’s old street names, and also a recollection of the downtown presence of the school that would one day become Columbia University… 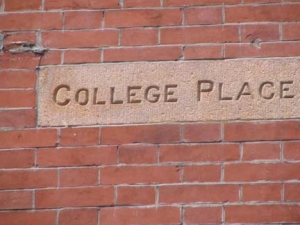 In 1754, King’s College was founded by royal charter of King George II, and classes were held on Trinity Church grounds. In 1760, the school moved into its own building on land donated by Trinity Church at present day Park Pl.

Classes were suspended during the Revolution, when British troops occupied the building. In 1784 when classes resumed with a new charter, it was thought that the name King’s was inappopriate, and it was changed to Columbia College.

In 1830, the stretch of West Broadway beween Warren and Barclay St was renamed College Place In 1857, Columbia sold the campus and moved to Madison and East 49th St. The main hall of the Park Place campus was demolished in 1860. wiredny.com 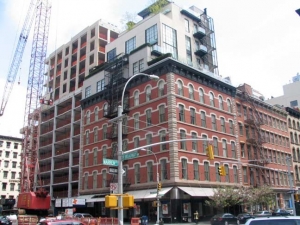 The FNY title card today depicts the originally 5-story brick building at the NE corner of West Broadway and Warren Street. Originally known as the Munitions Building when built in 1882, in 1999-2000 it had a 5-story townhouse plopped on top of it! It is furnished with pieces by artists and sculptors Jenny Holzer and Dale
Chihuly, and sold for $3M in October 2007.

Until about 1850 West Broadway between Warren and Canal Streets was known as Chapel Street. Many streets’ names in the area were influenced by Trinity Church: streets were named for sextons, ministers, and churchmen, as was Church Street a block away. 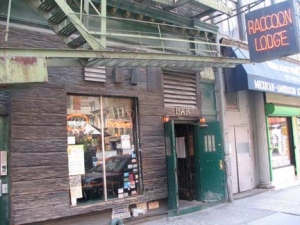 Raccoon Lodge, 59 Warren Street. A fun mix of millionaires, vagabonds, and everyone in between. “You know Jason Priestley,” the bartender said recently. “Well, he beat my record: 47 minutes in the ladies’ bathroom with a stripper!” The hard hats of firefighters are still dusty down here, blocks away from ground zero, resting near many other trophies of sport: a moose’s head, a pig, and a few old brassieres. Village Voice

I didn’t have time to go in, but I was attracted by the neon! 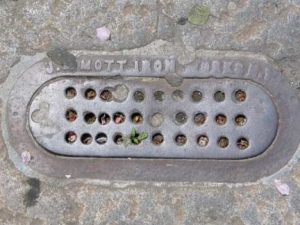 J.L. Mott Iron Works grate, NE corner West Broadway and Warren Street. Jordan Mott’s iron works was located in the southern end of the Bronx; Mott had purchased the property in 1849 from the Morris family of colonial-era fame, and Mott Iron Works was instituted in 1856. Mott Iron Works built kitchen and bathroom supplies, as well as supplying materials for large-scale projects such as the Statue of Liberty.

After Mott bought his land, Gouverneur Morris II was asked if he minded if the area was called Mott Haven, a name it had quickly acquired. “I don’t care…while he is about it, he might as well change the Harlem River to the Jordan.”

Mott Haven is one of the Bronx’ most architecturally diverse areas. 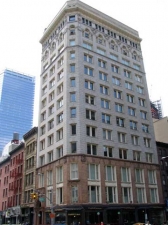 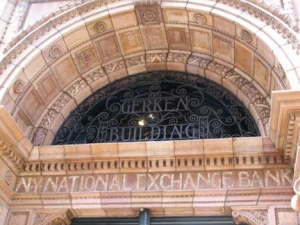 While London has its Gherkin, Tribeca has its very own 1899 Harding & Gooch-designed Gerken Building, formerly home to the National Exchnage Bank, at the SW corner of West Broadway and Chambers Streets. The Cosmopolitan Hotel, NE corner West Broadway at Chambers Street, has always been a place of lodging since it was built in the 1845. It was built to accommodate travelers – the old Hudson River Railroad terminal, was just across the street on the west side of the street. The railroad was a passenger and freight line pulled by horses up Hudson Street to a railyard at West 30th Street and 11th Avenue, where locomotion was switched to steam trains.

The Cosmo was originally known as the Girard House and favored travelers with “spacious halls, large airy rooms furnished with Brussels carpets and black walnut furniture, a restaurant and bar, and a lobby lined with oil paintings” according to the Landmarks Preservation Commission. From 1869-the 1940s it was the Cosmopolitan, and for a few decaces after that, when it was in decline, it was the Bond Hotel. Today the restored and renovated Cosmopolitan is once again thriving in a renewed Tribeca. Contrary to popular mythology, Abraham Lincoln did not stay here while campaigning during the 1860 presidential election in the city. According to historian Oliver E. Allen (Tales of Old Tribeca) he stayed at the Astor House, further downtown at Broadway and Vesey Street. The Lower West Side and Tribeca’s street layout offers a lot of opportunities for odd little triangles since there are a number of streets that follow the Hudson River shoreline northwest (West, Washington, Greenwich, Hudson) and others that go “north” (not true north) along the island’s spine such as West Broadway, Broadway itself and Centre Street. Where the two plans meet, voila, streets meet and greet each other at triangles. The triangle formed by West Broadway, the beginning of Hudson Street, and Reade Street, has been named James Bogardus Triangle.

Bogardus (1800-1874) was an engineer and architect who constructed Manhattan’s first cast-iron front buildings. The use of cast-iron was considered the first step on the road to the modern skyscraper.

The garden was instituted in 1996. Its commemorative sign is in error, stating that Bogardus died in 1847: this was 2 years before he built his first NYC cast-iron building. 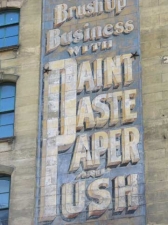 The building at the NE corner of Reade Street and West Broadway features a miraculously-preserved ghost ad for a long-out-of-business paint store, with the slogan “Brush Up Business with Paint, Paste, Paper and Push!” At first I was mystified about what paint or plaster prroduct “push” referred to, but someone told me that it merely referred to promotion.

The hand with the brush reminds me of the scene in the Arthurian legends where Arthur receives Excalibur and later tosses Excalibur to the Lady of the Lake before he sails off for Avalon. 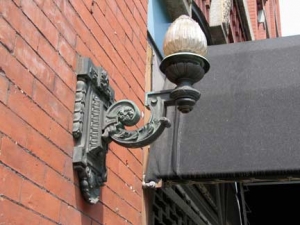 ABOVE: NE corner West Broadway and Duane Street; right: Duane west of W. Broadway. This section of Tribeca, north to about Canal Street, was once swampland, and after it was acquired in the late 1600s by Anthony Lispenard (Anglicized from the French L’Espenard) the tract was known as Lispenard Meadows. Anthony’s son Leonard, who built a mansion at today’s Hudson and Desbrosses Streets, was a Revolutionary War hero. Leonard, Lispenard, Thomas and Anthony (now Worth) Streets were named for Lispenard family members. “Whalebone.” Complete with period, this painted sign is done in 19th-Century style. But what does it signify?