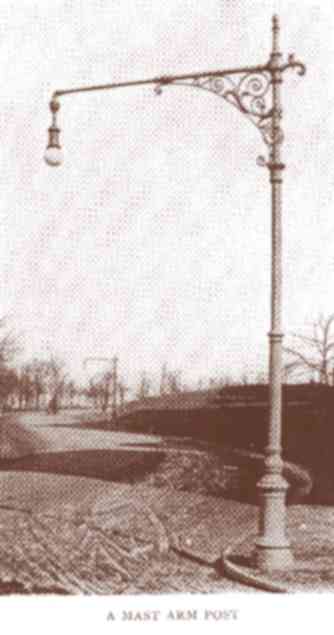 Once upon a time, New York City avenues were dominated by a long-armed, chocolate-colored cast-iron pole that my fellow lamppost maven Jeff Saltzman (whose site you can reach here) calls the “Corvingtons” although I doubt the Department Of Transportation ever gave them a real name. While side streets mostly had Bishop Crook poles, or a short-armed version of the cast-iron pole (see Seventh avenue page), the long-arms were the real workhorses of the avenues.

At left, an early version of the Corvington longarm ca. 1892.

Actually, “Corvingtons”, and other castiron NYC lampposts, are classified by catalog. In 1934, the NYC Bureau Of Gas and Electricity (which like today’s Department of Transportation) was responsible for streetlighting) published The System Electric Companies: Photographs of Street Lighting Equipment As Of November 1, 1934. The pamphlet gave code numbers to every type of streetlight in NYC, identifying 76 types! Of those 76, only 19 have representative samples today.

The post at left was classified as Type 24M.

They began to be pushed out by the octagonal silver colored streamlined poles that dominated NYC street lighting to this day. Old versions of the long-arm are rare indeed in NYC today. A retro vogue has sprung up in recent years that has seen new versions of the long-arm installed on certain avenues, such as Columbus Avenue on the Upper West Side and Atlantic Avenue in Brooklyn Heights. Here are some of the real McCoys: 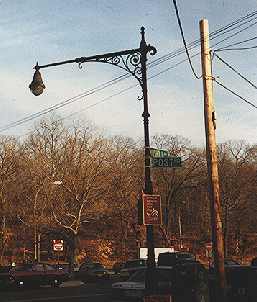 This wonderful old long-arm is shown on the corner of Mosholu Avenue and Post Road in the Bronx. Post Road itself is a remnant of the old Albany Post Road which stretched from New York City all the way to Albany. The route is now occupied by Broadway and Route 9.

The System Electric Companies pamphlet refers to this as “Type G” post. Type G posts are generally a bit shorter than their Type 24M cousins and feature different scrollwork. 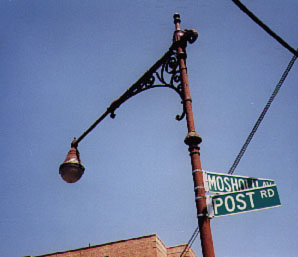 In 1998, somewhat the worse for wear, the ancient pole still guarded the corner. Sadly, the Mosholu pole did not make it to the new millennium. 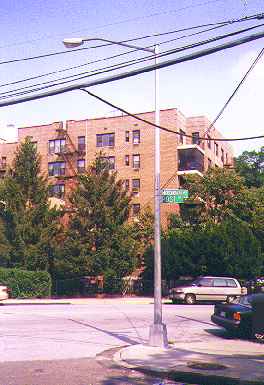 The DOT, noting its rusted, decrepitating condition (and bowing to its overwhelming need for standardization) replaced it with a modern pole in late 1999. 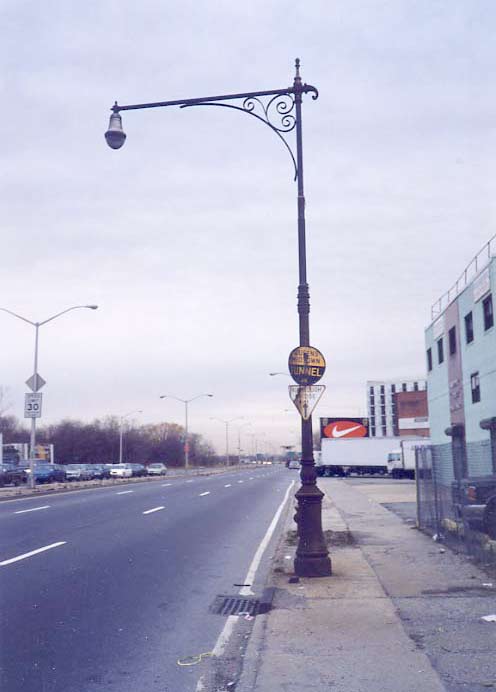 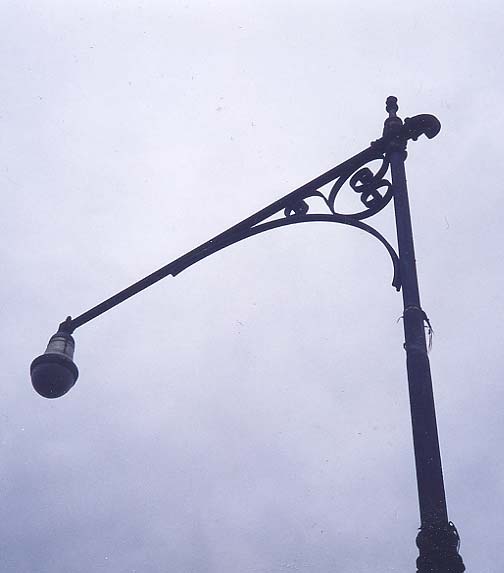 On the outskirts of New York City, guarding the way into Nassau County, there was this long-arm, complete with old Triborough Bridge and Queens Midtown Tunnel signs. It was on Rockaway Boulevard, just off the corner of Guy Brewer Boulevard, and it was truly the lamppost that time forgot. IUntil recently, Rockaway Boulevard had had other such fossils, but this is the only one left standing. It had slightly simplified scrollwork compared to the Type 24M.

The city is busily installing new versions of this classic lamppost most notably on Columbus Avenue, but is letting real specimens deteriorate and die.

By 2002 this post had succumbed to a traffic mishap. It had already begun listing considerably when I found it. 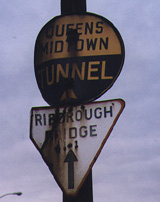 Close-up view of the old Queens Midtown Tunnel and Triborough Bridge signs on the Rockaway Boulevard pole. When these signs were first installed, they were among motorists’ few options to Manhattan or the Bronx, since the Long Island Expressway (at that time Horace Harding Boulevard), and the Whitestone and Throgs Neck Bridges were yet to be built.

In a move equivalent to putting the head of Alfred E. Newman on Botticelli’s Venus, the DOT in the Eighties decided to install new sodium vapor bulbs on existing cast-iron poles. The results make for adequate, crime-busting street lighting, but ruin the spirit of the old poles. In any case, these poles have now had at least three, and perhaps four, generations of luminaires gracing their masts. 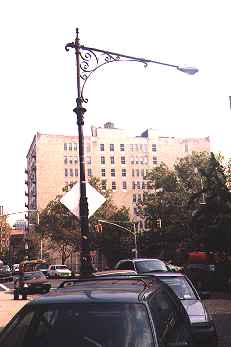 Except for the telltale sodium bulb on the mast, the above photo could very well have been taken in the 1940s. It was, however, snapped in January 1998 on Little West 12th Street (Type G) near Ninth Avenue in Manhattan. 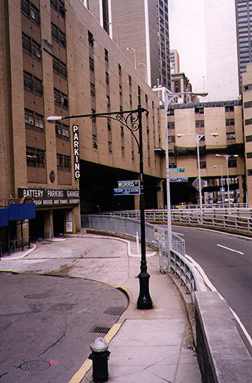 A small flock (about 5 or 6) old long-armed Type 24Ms can be found in the Brooklyn Battery Tunnel area. Some have been given regulation sodium lamps, while others now sport faux-incandescent fixtures fashioned to resemble the old-style ones. This pole, on Washington and Morris Streets, has the “normal” sodium vapor light. 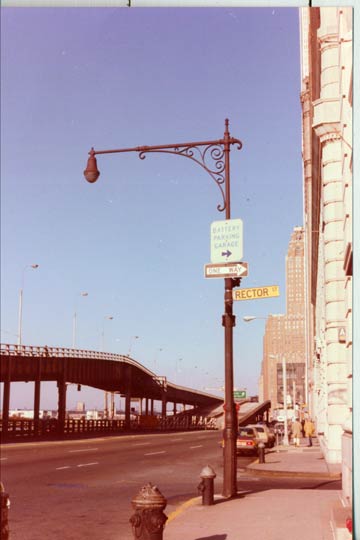 This is a Type “K” post with narrow base, used on streets with narrow sidewalks, at West and Rector Streets It has had a Type 24M mast attached. When the post was installed in the 1910s, West Street fronted on shipping and passenger lines; by the time of this photo, 1978, the West Side (Miller) Highway had been built and abandoned. It would be razed over the next few years. Photo: Bob Mulero 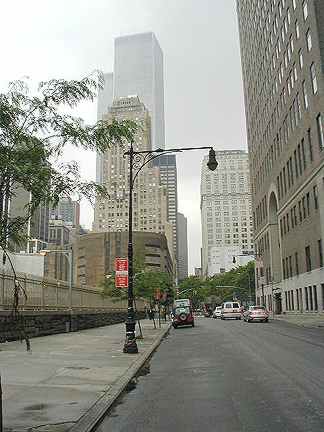 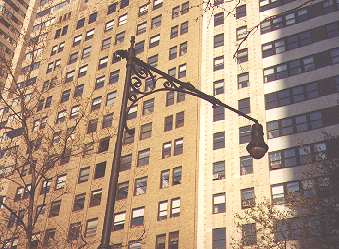 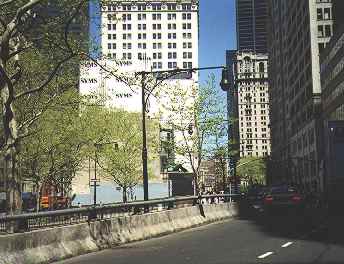 At the Brooklyn Battery Tunnel exit, where Greenwich Street meets Trinity Place, there’s a veritable plethora (as the late Howard Cosell would say) of long-masted “Corvingtons”.

These are all original poles from the 1910s, but they have been given modern “Mission Bell” sodium luminaires. 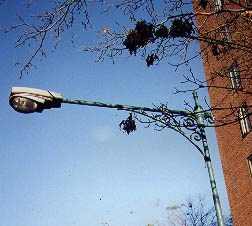 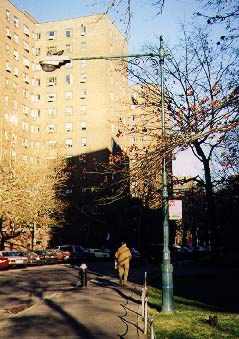 Stuyvesant Town on the Lower East Side cultivates its own set of Type G cast iron poles. Unlike their sisters on city streets that depend on the NYC Department Of Transportation for care and feeding, these poles are regularly painted and cared for.

2005: Styvesant poles have been rehabilitated, with a new paint job and luminaires.

Though Type G Corvingtons could be found on side streets mostly, they also served to illuminate park paths. 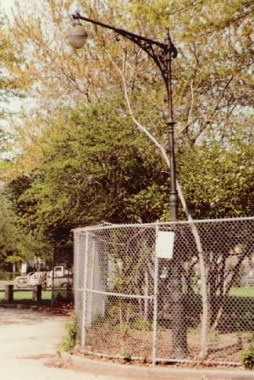 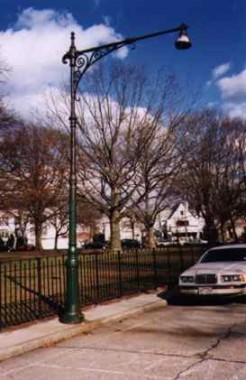 The Dyker Park Golf Course in Bay Ridge Brooklyn at 7th Avenue and 86th Street was home to a number of ancient Type Gs that, unfortunately, have not worked for a couple of decades. They were eventually torn down by 2001. These 3 Type Gs were abandoned in the weeds in Van Cortlandt Park in the Bronx and stood until the mid-1980s. In a makeshift operation, the luminaires are attached with the octagonal pole fixtures that first appeared around 1950 or so. 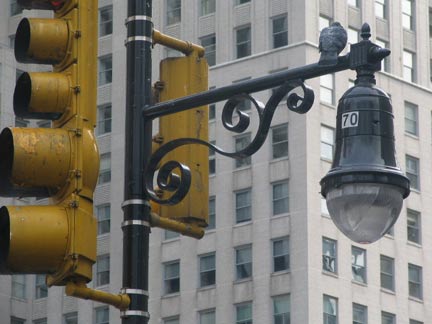 New Corvington Type 24M at 5th Avenue and West 58th St in front of the Plaza Hotel with ‘mini-me’ sidewalk illuminator. The ‘mini-me’ design is reminiscent of the ones used on telephone poles in the early 20th Century. More can be found along Central Park South. In addition, “mini-me” Corvingtons  have been installed to light sidewalks on Lenox Avenue/Malcolm X Boulevard for a few blocks north of Central Park. Frawley Circle (5th Avenue and Central Park North) preserves a genus of Corvington that flowered briefly in the 1990s. These were installed along Central Park WEST from Columbus Circle north to West 72nd Street. During a gusty Macy’s Thanksgiving Day parade, a breeze blew a ballloon into one of the poles, which fell and struck a woman unconscious. She recovered, but these poles were removed and replaced with Type 24T Twins parallel to the street. This clutch, at Frawley Circle, survived the extinction.