NYC stoplight design has pretty much been stuck in neutral since the 1960s, when cylindrical posts holding three-light stoplights as well as WALK/DONT WALK signs first appeared on street corners, joining the more massive guy-wired lamps at major corners that first appeared in the 1950s. This page will take  a look at the stoplight posts these replaced.

There was a time in the not-so-distant past when most stoplights in New York City looked like tthis one at Crocheron Avenue and 170th Street in Auburndale, Queens. They were small, olive-painted poles, two at an intersection. I first saw it in 1994 (it had been there for five decades or more). By April 2002, the Department of Transportation noticed it an replaced it with a cylindrical modern pole.

They were generally outfitted with two-color stoplights, yellow being reserved for special occasions. Caution was signalled by the simultaneous display of red and green for a couple of seconds before the light changed to red.

Jeff Saltzman’s streetlight site has pictures of some of these poles with their original stoplights attached. You can visit the site here.

Yellow wasn’t always the color of NYC stoplights, as odd as that seems now. The stoplights themselves were originally painted the same color as the olive-green poles they were attached to. Yellow began to replace olive green around 1965 or so.

As of July 2005, this survivor was holding down the corner of 110th Street and 69th Road in Forest Hills. I treasured it when I first found it, but by January 2009, the DOT found it and eliminated it.

This pole was at 179th Street and Linden Boulevard in St. Albans, Queens. It’s still got its original olive green coat. Early 2006: RIP 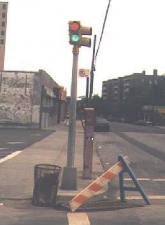 The isolated Rockaway Peninsula has some Stoplights That Time Forgot. 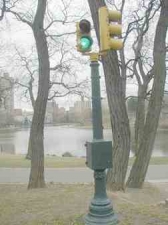 Above: 4 classic stoplights along the East Drive in Central Park . The park still shelters a number of these.

Also in Central Park near Columbus Circle we have this very rare old-style traffic light control box; perhaps the last of its type left in NYC in 2005, when the picture was taken. Bob Mulero

Above, two views of stoplights on Liberty Avenue in Richmond Hill, one of the few thoroughfares in the city that employed two-light stoplights on certain corners past the year 2000.

These aren’t the original lights— these were installed sometime in the 60s or 70s. Modern stoplights all contain a yellow light, but these don’t. The stoplight on the left is still using its original olive-colored pole, while the round aluminum pole on the right was introduced in the 60s. The yellow amber caution light was effected by showing both red and green simultaneously. 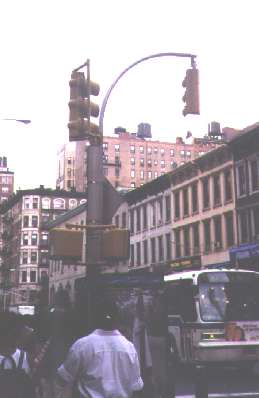 This unusual Donald Deskey-designed lamppost supports a stoplight on its mastarm, the only such use I’ve found in the city. It appears on Lexington Avenue just outside Lenox Hill Hospital.

Lexington has since been given retro-Bishop Crook lampposts and this pole has been painted black to match them.

On wider streets, a stoplight that hangs over the street was called for. NYC was once dotted with cast-iron stoplights on the right that fit that bill. They all boasted a distinctive ‘Model T; wheel design (as seen above) on their arms. Of course, their stoplights were strictly of the two-color variety and were painted the same olive color as their poles.

These poles were replaced by the modern two-guy wired thick-bodied poles starting in the late Fifties. These poles look like the heftier cousins of the aluminum streetlamps that were going up at about the same time.

Several specimens are still about. Deep in the heart of Central Park, on the 86th Street Transverse Road by the police station, you can still find  a “wheelie.”  This one is rather short as these poles go (note the lamppost and flagpole in the photo at left.

Only three examples of this kind of stoplight are left in NYC . The other two are in perilous condition at The Helmsley Building, Park Avenue and East 46th Street.

These stoplights, and other castiron NYC lampposts, are classified by catalog. In 1934, the NYC Bureau Of Gas and Electricity (which like today’s Department of Transportation) was responsible for streetlighting) published The System Electric Companies: Photographs of Street Lighting Equipment As Of November 1, 1934. The pamphlet gave code numbers to every type of streetlight in NYC, identifying 76 types! Of those 76, only 19 have representative samples today. The pamphlet did not classify these posts since they were used for traffic control.

They were first installed on Broadway in 1924.

DONT WALK and WALK signals are now quite rare; the department of Transportation replaced them all with graphic signals beginning in 2003. This one, in 2005, was at Park Avenue and East 35th Street. Meanwhile there are still signs explaining what to do when DONT WALK and WALK are flashing!

TAKE THE NOSTALGIA TOUR! A ride to Canarsie on 1927-vintage subway cars