THE SUBWAYS REMEMBER with ancient signage

The above stops have had their old station names retained through various eras of signage, and the old names are today preserved with modern black and white metallic signs. Other areas in the subways, though, have old names that the subway system seems to have overlooked. For example… 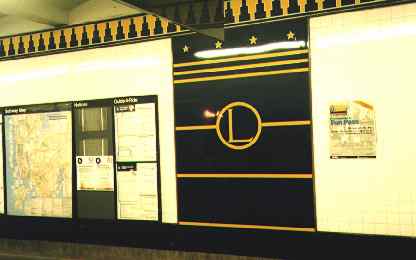 What is that mysterious “L” in the mezzanine of the Hoyt-Schermerhorn IND station (A,C,G)?

The L stands for “Loesser’s”. The store stood above the station decades ago. [as of 2010, these signs had been removed] 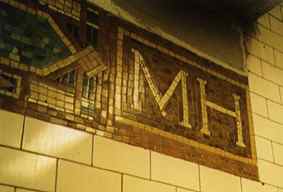 Tiled sign still points the way to Vernon Avenue at the Vernon-Jackson Avenue station, the first eastbound station in Queens on the 7 line. Anyone seeking a Vernon Avenue in the area will be disappointed, however, since Vernon Avenue had its name changed to Vernon Boulevard several decades ago. 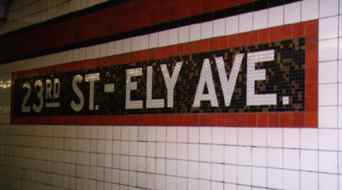 The 23rd St-Ely Avenue Station, which serves E and F trains on the IND, actually has a redundant name since Ely Avenue is the old name of 23rd St. Queens streets were all given numbers by the Queens Topographical Bureau in 1915, although it took some years before the plan gained universal recognition. 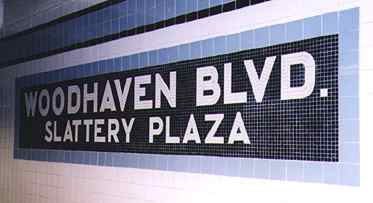 The Woodhaven Blvd. stop is at the intersection at Queens Blvd where the two roads meet the Long Island Expressway. It hasn’t been called Slattery Plaza for may years at least; it’s now home to a large shopping center called Queens Center.

Slattery Plaza was a small cluster of stores that occupied a traffic island on Horace Harding Boulevard in the 1930’s and 40’s, and disappeared when the Long Island Expressway was built, said Jeff Gottlieb, president of the Central Queens Historical Society.

He said the plaza was named for James Slattery of Jackson Heights, an engineer who helped map the BMT subway lines. NYTimes 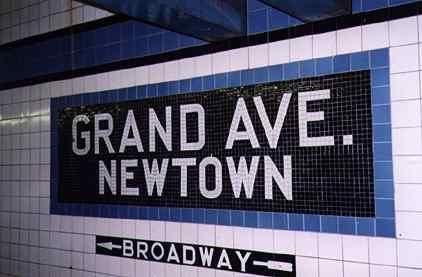 The name ” Newtown” goes back to colonial times. The first European settlement in Queens was made in Maspeth in 1642 and abandoned in 1644 after it was attacked by Indians. Another settlement was made in 1652 at today’s Queens Boulevard and Broadway. After going by such names as Middleburgh and Hastings, it was decided to name it Newtown in 1683 because residents referred to it as the “new town” to distinguish it from the first settlement.

The village of Newtown consolidated with the City of New York in 1898. It is remembered in Newtown High School, Newtown Avenue and Road, and this IND subway station. Unusually, Newtown had been absorbed by NYC long before its construction had begun!

Mott Avenue was replaced by an extension of the Grand Concourse in the 1920s. 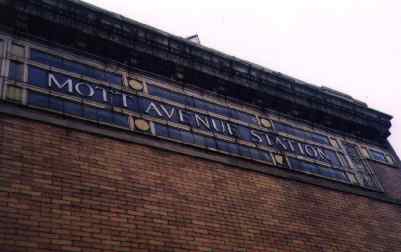 The Mott Avenue name for the station has also persisted on the side of this building at East 149th St and Mott Avenue, near the Bronx General Post Office and Hostos Community College.

Mott Avenue was named for Jordan L. Mott, an early landowner in that part of the Bronx in the early 1800s. The village of Mott Haven was incorporated in 1848 and annexed to New York City in 1874. Mott invented the base-burner stove (which could use anthracite) in 1833 and founded the Mott Iron Works on the Harlem River. The name Mott Haven for the neighborhood has persisted through the years. 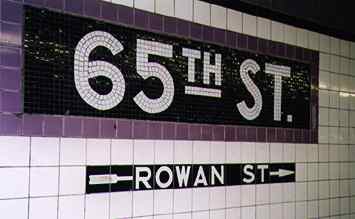 Rowan Street is the former name of 65th Street in Woodside, Queens. The station serves the R and G lines of the BMT/IND.

It’s unclear why the name was included, though: by the time the station was built in the 1930s, the street had already had its name changed to 65th Street. 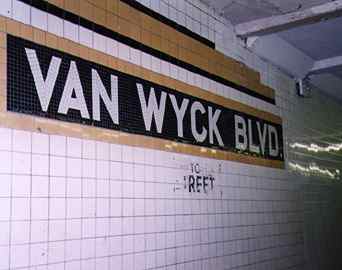 Van Wyck Boulevard, a stop on the E/F in the Briarwood section of Queens, has undergone a subtle change: the Van Wyck Expressway was constructed along the old boulevard in the years following the subway construction. The road is named for the first mayor of consolidated New York City in 1898.

TAKE THE NOSTALGIA TOUR! A ride to Canarsie on 1927-vintage subway cars