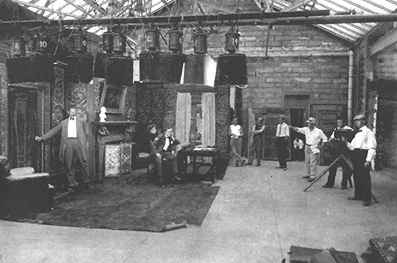 At left we see a scene from Vitagraph Studios, which was located at East 15th St. just north of Avenue M in the Midwood section of Brooklyn, then known as South Greenfield.

Photos from Brian Merlis’ Welcome Back To Brooklyn.

The Encyclopedia Of New York City (Yale University Press, 1995) has this listing on Vitagraph Studios:

An open-air, rooftop motion picture studio, opened in 1898 by American Vitagraph in the Morse Building at 140 Nassau Street [Manhattan]. The film Burglar On The Roof was produced in the studio during its first year. In 1890 the company moved its offices to 110-16 Nassau Street and then opened a glass-enclosed studio in 1906 at 15th Street and Locust Avenue in Flatbush…

…Warner Brothers purchased American Vitagraph in 1925 and used the studio for many of its Vitaphone short subjects before closing it in 1939; it continued to produce film there even after the National Broadcasting Company (NBC) bought the studio in 1952 and began using it for color television broadcasts. 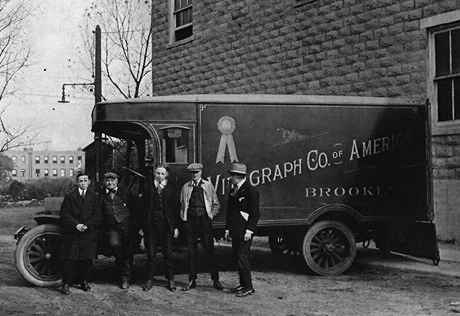 In the above picture note the old-fashioned cast-iron lamppost, barely visible at left. See my page on ancient lampposts!

Vitagraph Studios turned out hundreds of silent Westerns and Civil war battle pictures in the surrounding neighborhood, which was still open country in the 1910’s.

After the advent of talkies, Vitagraph continued to make movies under the name ‘Vitaphone’ until 1939. NBC Television built a studio nearby in 1952. The Cosby Show, among other shows, has been taped there.

The Shulamith School For Girls has taken over the Vitagraph studios site.

Why are we featuring Vitagraph Studios here? Because…

The Vitagraph smokestack, still clearly marked with the name of the old studios, can be seen from Locust Avenue from just east of the subway tracks at East 15th Street.

A close look will reveal Vitagraph spelled vertically along the smokestack.

Paul Matus has a page on Vitagraph Studios on his Rapid Transit Net site!

THE SUBWAYS REMEMBER with ancient signage

[…] more stop before scurrying off to the “warmth” of the Q train platform at Avenue M: the Vitagraph smokestack. Vitagraph was a film company in New York at the turn of the 20th century, and used to have a […]

[…] Encyclopedia of New York City has this on Vitagraph Studios (via Forgotten NY): An open-air, rooftop motion picture studio, opened in 1898 by American Vitagraph in the Morse […]