New York City has preserved more of the classic Bishop Crook lampposts than any other of the cast-iron designs. In fact, the city has been busy since the 1980s bringing back the bishop crook design in newly installed posts, notably along Sixth Avenue in the Village and as far north as 23rd Street. 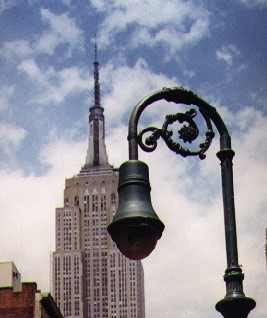 The bishop crook pole at left was a temporary one installed at 5th Avenue and 26th Street in 1999 for a movie shoot. Whoever is designing that movie, though, is probably unaware that Fifth Avenue has never had bishops crook lamps installed along its length. Instead, Fifth has always been the bastion of Twinlamps beginning in 1892. It does make a compelling photograph, however!

For real McCoy bishop crook lamps that have survived the years, keep scrolling.

Bishop Crooks, named for the staff carried by high-ranking clerics, made their first appearance in NYC in about 1892 or so, the same year as the 5th Avenue Twinlamps. Apparently the design first originated in Bath, England.

At left we see one of the very first Crooks, with original “acorn” pendant luminaires. 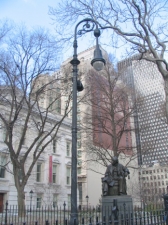 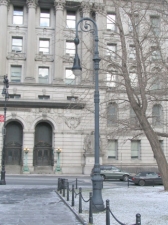 For many decades, City Hall Park has been home to about a dozen bishops crook lampposts. They are regularly painted and maintained by the city.

City Hall Park underwent a major renovation in 1999 and these bell fixtures were replaced by pendant lamps. The poles were repainted and many of them are still there. 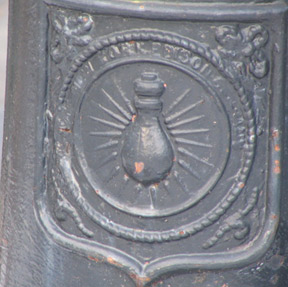 Bishop Crooks, and other castiron NYC lampposts, are classified by catalog. In 1934, the NYC Bureau Of Gas and Electricity (which like today’s Department of Transportation) was responsible for streetlighting) published The System Electric Companies: Photographs of Street Lighting Equipment As Of November 1, 1934. The pamphlet gave code numbers to every type of streetlight in NYC, identifying 76 types! Of those 76, only 19 have representative samples today.

The following Bishops Crook variation happened to be designated Post #1 in the pamphlet. It is the first of six variations in the Bishops crook design.

It features a ladder rest crosspiece, which harkens back to the gaslight days, as well as a garland design on the shaft. 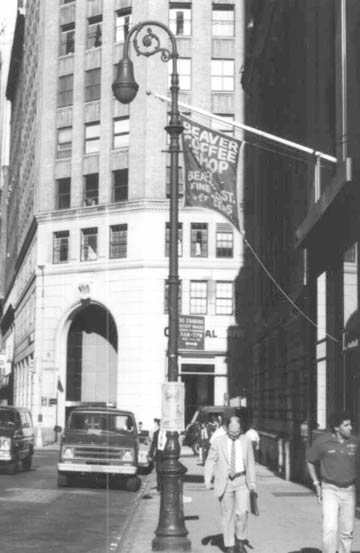 This Beaver Street Bishop has since been given a new “Mission Bell” sodium light fixture. Sodium lights are the intense yellow lights that most NYC lampposts are now outfitted with. 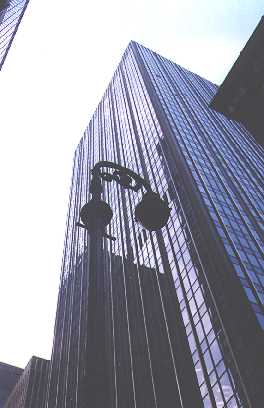 East 49th east of Park Avenue: When the little bishop crook poles were first installed, could their designers ever have thought they would be looking up at towering steel and glass skyscrapers? 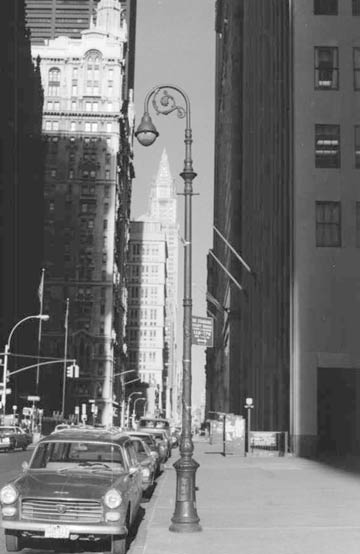 Broadway near Rector Street, 1978. As of 2005 this post was still there but with a new mission bell luminaire, replacing the cuplight. The cobra head posts on lower Broadway were replaced with new angular posts in 2002. This is a Post #1 with full crossbar. Photo: Bob Mulero. 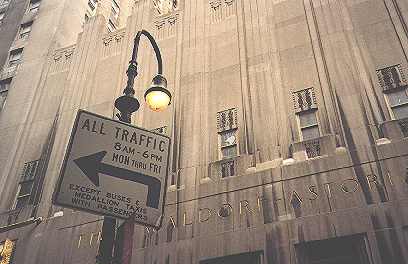 This bishops crook pole has 49th Street between Park and Lexington all to itself. It faces the world famous Waldorf-Astoria Hotel. It has lost its distinctive filigree at its apex. This was most likely a Type 1 post because of the presence of a crossbar. 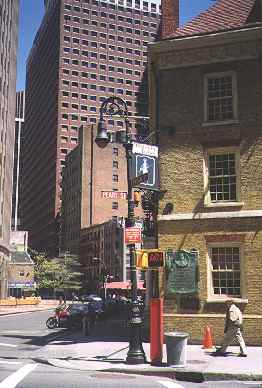 Although this isn’t the original Fraunces Tavern building, where Washington bade farewell to his officers at the end of the Revolutionary war in 1783, this building does date to 1907, which isn’t too shabby.

This is an example of the most common variety of Bishops Crook. In the 1934 System Electric Companies: Photographs of Street Lighting Equipment pamphlet, it is designated Post #24A.

The term ‘castiron’ is not completely true for this post, since only the lower 13 feet are castiron. The top portion is a combination of curved pipe and attached castings.

The crossbar and shaft garland are absent.

Most of the new Bishops Crook knockoffs appearing on NYC streets for the last decade are modeled on the 24A! However, a garland design has been added to the shaft on these new posts. 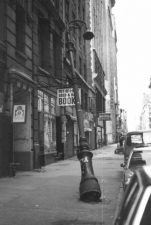 Bishop Crook with simplified scrollwork, West 18th Street between 5th and 6th Avenues, 1982. After a traffic mishap, it was replaced with a hexagonal shaft pole. This lamppost was removed about 1981.

Some bishop’s crooks turn up where you’d least expect them to. This one is at Broadway between Kimberley Place and West 230th Street in the Kingsbridge section of the Bronx. It was one of a whole army of such poles that lined Broadway in the area, but this is the last one left.

The luminaire has a rare extended reflector bowl, once common on cuplight-type luminaires like this one. Newer ‘retro-crooks’ have revived the practice.

No wonder the crook has been undisturbed: it is under the aegis of a protective agency.

Note the original New York Edison symbol, matching the one above in City Hall Park. 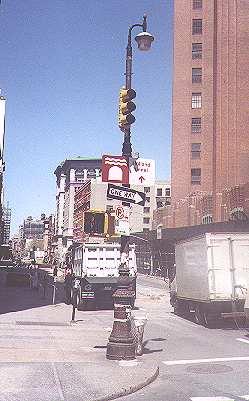 Here are the remains of a Bishops Crook that met with a mishap sometime in the recent past. The city was forced to improvise, and what’s left is a unique pole that has a style all its own. Unfortunately, you have to deduct points for the ugly modern bucket sodium light. This pole stands at Hudson and Duane Streets in Soho.

The sign on the pole is both a graphic description and a regular sign pointing the way to the Holland Tunnel.

In 2010, the City finally got around to giving this banged-up post a fresh crook piece. 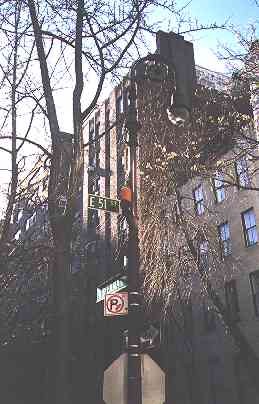 New bishop crook posts, installed in the 1980s, line this part of East 51st Street and Beekman Place. This one, however, is an original one that has been polished and spiffed up to standard.

How can you tell it’s an older pole? The special molding on the arm that holds the orange fire alarm light isn’t used on the newer models.

Beekman Place was the long-time residence of one of America’s greatest popular music composers, Irving Berlin. 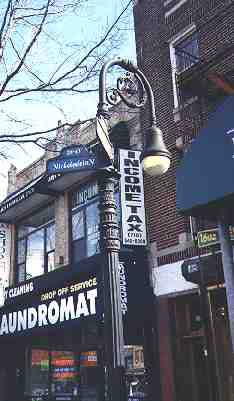 This truncated Bishop is on Steinway Street near 31st Avenue. It was most likely purchased by a restaurateur and placed there some years ago. The bulb works, probably wired from inside the restaurant.

It was most likely truncated by the restaurant owner, or was one of the ‘dwarf’ lamppots along streets under elevated railroads.

It still bears its original ‘humpback’ street sign brackets, although only one of the original signs. 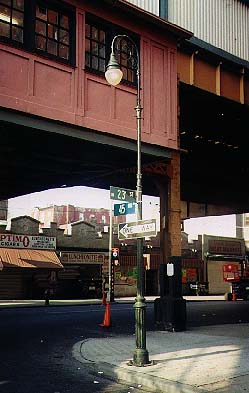 An ancient relic of bygone days in Long Island City. Sure looks like it, doesn’t it?

Alas, it’s a temporary prop installed to give ambience to external street scenes being filmed by Woody Allen. This pole was on 23rd Street in December 1998. 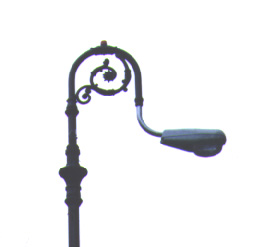 In late 1998, a new wrinkle in the Bishop Crooks saga appeared, as the city began installing sodium luminaries on the previously sacrosanct poles. These poles appeared primarily on Nassau Street and in the City Hall area. Perhaps the city ran out of the usual decorative bell-shaped fixtures! These were mostly removed and replaced by bell fixtures in the spring of 1999.