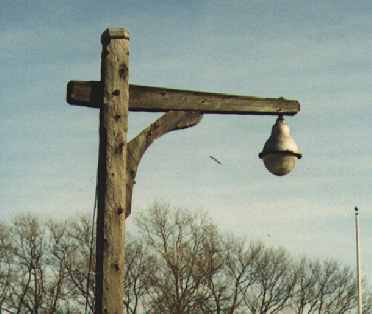 Constructed exclusively to light the network of parkways that Robert Moses constructed beginning in the Twenties, these distinctive poles are made of both wood and iron. Some are still in New York City but you have to know where to look!

Once upon a time, wooden lampposts like this one dominated NYC parkways constructed by Robert Moses in the twenties and thirties in New York and on Long Island. The Shore (Belt) Parkway, Cross Island Parkway, Laurelton, Grand Central, and Northern and Southern State Parkways all had them. They were also featured in parks and main roads throughout the NYC area. Their numbers began to diminish in the 1960s as aluminum poles began to proliferate on the parkways. 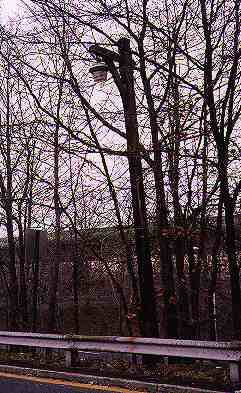 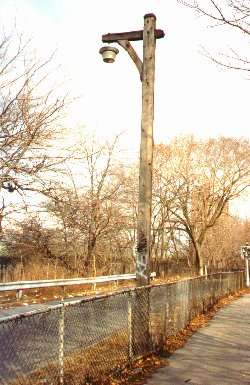 Lampposts made almost entirely of wood have been gracing parkways in New York City and Nassau County since the mid-1930s. They were the original lampposts that appeared on parkways designed by Robert Moses such as the Circumferential (Belt) Parkway and the Northern andSouthern State Parkway. They’ve supported quite a number of luminaires over the years from incandescent lights to bucket-type sodiums (left).

In recent years, however, on the Parkways the Woodies have increasingly been giving way to modern aluminum poles. Above are two of the short-armed Woody poles that lit entrance ramps to the Belt Parkway in Bay Ridge. Installed in 1940, they disappeared sometime around 2000. 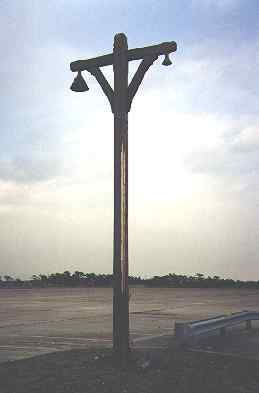 Standing forlornly in the middle of the vast Riis Park parking lot on the Rockaway peninsula, this Woody, which is gradually losing its wood, is the last of a vast flock. 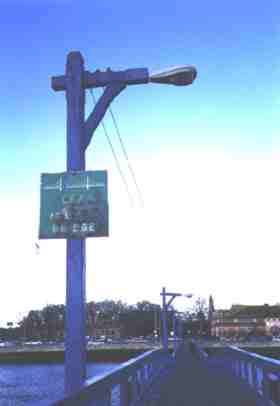 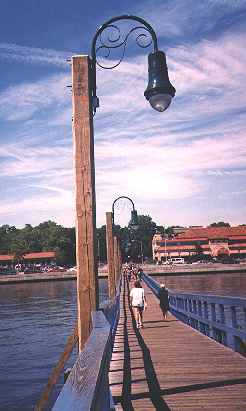 Probably the most unusual use the Woodies have been put to in the five boroughs is on the ancient wooden Ocean Avenue footbridge that connects Emmons Avenue and Shore Boulevard in Sheepshead Bay. When I was a kid, bridge and poles carried a battleship gray color; today they’re a bright blue.

Note battered “Ocean Avenue Bridge” sign attached to the woodie. These were given new U-shaped lamps around 2000. 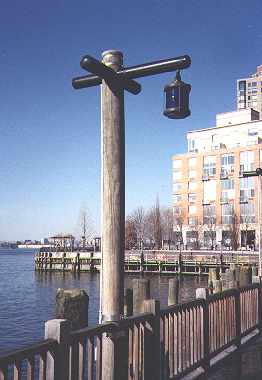 Another example of a ‘new’ woody that has come along in recent years are the park lights in the new Robert Wagner Jr. park just below Battery Park City.

These lights are especially atmospheric because their light shines through blue glass. 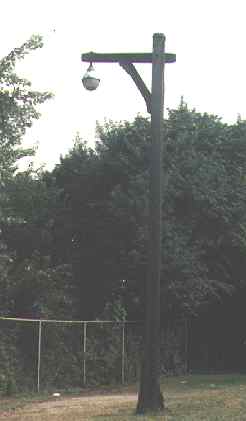 This Woody graced Randalls Island in the mid 1980s, and featured a rare “Gumball” luminaire. This picture was snapped in the early 1980s, and the pole may still stand today. 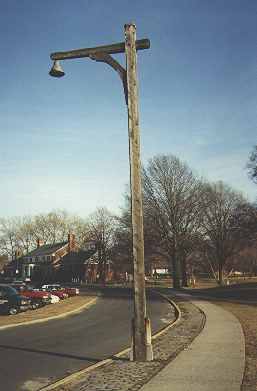 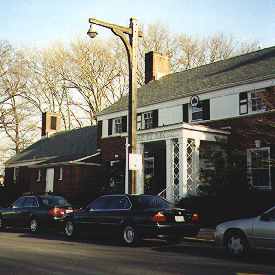 Three Woodies were still standing close to the Clearview Golf Course in Bayside.

The one on the right has a metal plate on it that says “1959” so I suppose that’s the last time anything was done to it. 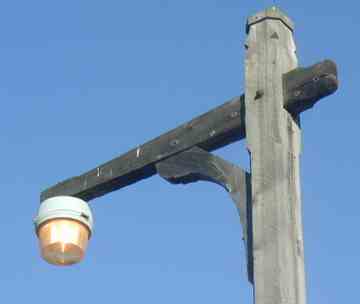 A couple of Woodies guarded the Flatbush Avenue exit at the Belt Parkway. These had disappeared by the early 2000s.