Southern Brooklyn still has a number of its ancient routes preserved as hardly-surviving dirt roads and alleys. Today’s Brooklynites probably do not know that these roads existed for centuries, ever since the first Dutch settlements in the 1600s. 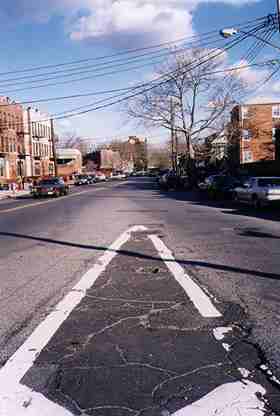 What, you might ask, is so unusual about this intersection of Avenue Z and Jerome Avenue in Sheepshead Bay, Brooklyn?

There’s clear evidence here that Jerome Avenue used to extend past Avenue Z–even though it hasn’t done so in decades.

The key is the brick building in the center-left background of the picture.

When the area was developed in the postwar era, that section of Jerome Avenue was eliminated. But, there’s evidence that points the way to Jerome Avenue’s former route.

A close look at the shape of the building on the northwest corner of Bedford Avenue clearly shows the diagonal route Jerome Avenue once described through the area.

RIGHT: Elsewhere in Sheepshead Bay, the building line on Avenue U east of Nostrand Avenue is a dead giveaway that Gravesend Neck Road also used to extend past Avenue U to the northeast.

[2010: the triangular-shaped building is being demolished, removing this bit of evidence] 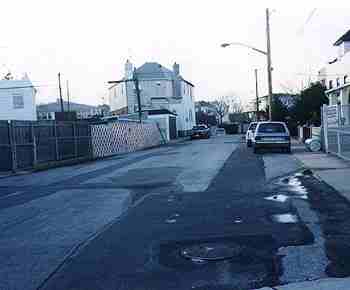 The short stretch of Mill Lane in Flatlands, left, between East 55th and 56th Streets, south of Avenue N , was once part of a more extensive road called Bergen Beach Road, as shown in the Brooklyn Eagle map circa 1900, below. 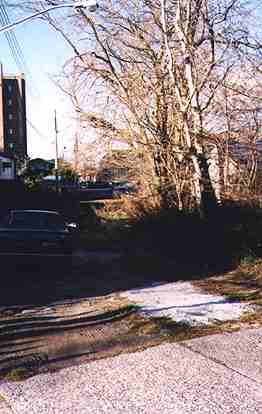 In Bensonhurst, Brooklyn, a short, unpaved street runs parellel to Cropsey Avenue in the vicinity of 27th Avenue. The City Department Of Transportation has never installed signs to identify it, and the lane has never been paved. It acts more as a driveway than a real street, although a few houses have been built along its length.

It’s not marked by the city, but those who live on the street know it as Mill Road.

Mill Road has been dated by researchers all the way back to 1670! It was named for two nearby mills and was a main artery for a couple of hundred years in this part of town. In 1889, Mill Road boasted a hotel, yacht club and other businesses.

When the neighborhood gained population and a more formal street grid was imposed on the area, Mill Road gradually lost its importance and became more of a driveway than a street. Later, the road became de-mapped and local residents now own the road, not the city, and it will probably remain unpaved.

Elsewhere in Brooklyn are Mill Lane (see above) in Flatlands and Old Mill Lane in East New York. 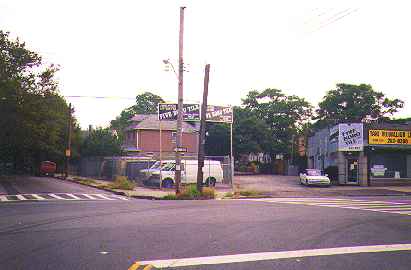 There’s an alleyway at Avenue M and Coleman Street, again in Flatlands, that I always suspected looked like an old roadway, or at least an old trolley right of way…

It turns out that I was right. The lane used to be a part of a very old road called Lotts Lane or Kimballs Lane, circled in the above map.

These streets predate the regular street grid in the neighborhoods in question. After the streets were constructed, sewers put in, houses built, and streets paved over, the old routes gradually fell out of favor. They survive as driveways and alleys. People whose homes border on them never realize that they reside next to a piece of history.

Lotts Lane, at right, forks off from Coleman Street at Avenue M.

Deep in the heart of Bay Ridge is a short lane known as Stewart Avenue. It may look like just a driveway in the picture, but there are houses along its length, and the city has marked it with green and white signs, although it has never paved it.

The road runs for a block between 73rd and 74th east of 6th, and an unmarked portion runs from 71st north to Ovington just west of 7th Avenue.

The 1890s-era map of Bay Ridge shows that Stewart Avenue was once a main artery, following the present course of Fifth Avenue. Note the Gelston property on the left: Gelston Avenue, then as now, is named for its owner. Fourth Avenue branches off at the top of the map, as it does today. The green area at the right of the map is Fort Hamilton. Note the proposed Bay Ridge and Lake Shore Railroad at the center of the map, that was never built.

This short lane trails off from Ford Street south of Avenue Z in Sheepshead Bay, Brooklyn. Today, it is a private right of way, although the city installed streetlamps many years ago.

Old maps show a series of diagonal lanes in this area that predate the later street grid.

Some maps show this lane as Kouwenhoven Lane. The Dutch Kouwenhoven name shows up frequently in ancient property maps in this part of Brooklyn.

Old maps indicate an ancient road called Emmers Lane, named for an early property owner, running diagonally betwen Avenues X and Y on either side of the current Brighton subway line in Brooklyn.

This path may be a remnant of it, especially since it runs at an angle.

The lore of the FRANKLIN AVENUE SHUTTLE