NeighborhoodsYou'd Never Believe You're in NYC

Nestled in the middle of Jamaica Bay is an island community known as Broad Channel. It is the province of seagulls, roaring jets taking off from Kennedy Airport, The Jamaica Bay Wildlife Refuge, and a proud, insular neighborhood that claims what it can from the bay, occasionally jutting into it by building on stilts. Unlike many NYC neighborhoods, it can claim a subway stop. Cross Bay Boulevard is the main artery and carries traffic between Broad Channel and the mainland, as well as the Rockaway peninsula.

Here is a look at a truly unique NYC region. 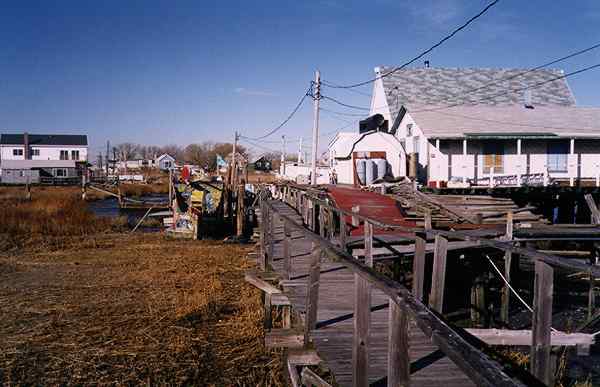 This is a view of Channel Drive, just south of the IND “A” subway stop. Seemingly flimsy wooden walkways lead to homes built on stilts over Jamaica Bay. At high tide, water rapidly fills the grassy area.

I leave the train at Broad Channel and walk into what looks like a Maine fishing village. Lines of tiny shacks are perched on shaky wooden piers. A few are lopsided. Small boats bob in the waves rolling under the piers. Nets and floats lie discarded in piles and the smell of seaweed wafts down the narrow streets of this unusual little community. To the west and rising in shimmering silhouette behind the ticky-tacky shacks and the bobbing boats and the piles of shells amid strands of seaweed are the towers of The World Trade Center…David Yeadon, in his book New York’s Nooks and Crannies, describes Broad Channel thusly:

…Take a stroll around Broad Channel, along the narrow paths where dogs run loose among the marsh grasses and chase minnows in the shallows. An old gentleman with white whiskers sits in a creaking rocking chair overlooking a neat garden with the statue of the Virgin Mary in the middle surrounded by thick bushes of red roses. Three fishing sloops sit on wood blocks above a barnicle-encrusted wharf. Piles of lumber are stacked everywhere…

Over 90-year old firehouse on Noel Road. The Broad Channel Volunteer Fire Department celebrated its 100th year of operation in 2005 and this frehouse was built in 1910. The firehouse shown around the time of WWI. Photo from collection of Gregg Battaglia.

The department originally started in 1905 as bucket brigade to help minimize loss due to fires. In 1907, this brigade was formally organized into the Broad Channel Volunteer Fire Department under Chief Edward H. Schulter, and granted a charter by the State of New York. The current firehouse at 15 Noel Road was opened in 1910. The second floor toward the back of the building was added in the 1970’s.

Just a mile or so up the road from the village is the entrance to The Jamica Bay Wildlife Refuge located on the famed Atlantic flyway. Here is a different world, a place of silence and beauty where one can sit by marsh paths and enjoy the slow curve of a flight of geese over the feather-topped reeds, the rustlings and scurryings in the undergrowth, blue herons lifting themselves languidly from still pools, the wild cry of seagulls cavorting in a stiff breeze, the calls and chirrups of scores of different birds, some of them rare species on the American continent…

Manhattan is distantly seen from the peace and quietude of the Jamaica Bay Wildlife Refuge. The World Trade Center is faintly visible at left. THis photo was taken 2 years before it was destroyed by terrorists.

This stretch of Jamaica Bay Wildlife Refuge is a spawning ground for local turtle species. We are looking southwest toward Brooklyn. The two towers in the center of the picture belong to the Marine Parkway (Gil Hodges) Bridge.

I revisited Broad Channel in 2007.