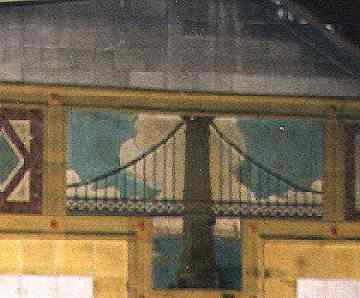 When the subways were first built in the early 1900s, they were blessed to have artists who put great care into the
appearance of the stations and platforms. Beautiful signs and plaques were fashioned to tell the paying customers what stations they were in…and what the history of the region was.

The Chambers Street station, completed in 1913, was originally going to be part of a loop line that would connect the Williamsburg and Brooklyn Bridges with a line through Manhattan. The Brooklyn Bridge connection was never built, but the bridge is depicted on plaques in the station, which reminds us of the former grand plan.

A close look at the plaque reveals an error made by designers George Heins and Christopher LaFarge. The Brooklyn Bridge in the plaque doesn’t have any of the distinctive diagonal cables that are its trademark.

On the plaque, we are looking south from the Manhattan tower. The Statue Of Liberty can be seen indistictly in the distance–a measure of the detail Heins and Lafarge employed in the execution of the plaque.

George Heins and Christopher LaFarge, as well as other designers of the stations, went to great lengths to tell a story in the signage. The original terra cotta plaques for the BMT Canal St, designed by Jay Van Everen, show the canal that drained the Collect Pond in lower Manhattan in the early 1800s, as well as the bridge that carried Broadway over it! By the time the subway came to Canal Street, canal, pond and bridge had been gone for a good fifty years. 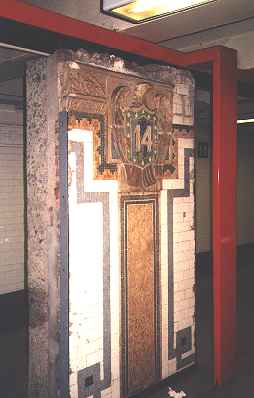 Renovations at 14th Street/Union Square isolated these eagle plaques which have been preserved as part of an exhibit on the concourse in the station.

Usually, but not always, a depiction of an eagle in a subway station meant a U.S. Armory in the streets above. 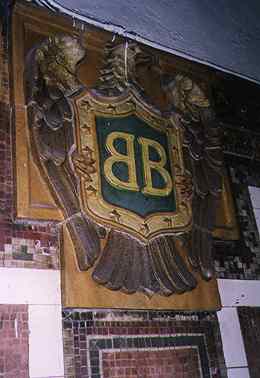 In a storage area, behind a locked door, this plaque, depicting a fierce eagle, stands guard in the Brooklyn Bridge Station, which serves the #4,5, and 6 trains. It’s the last (or first) stop on the #6 line, before it loops through the abandoned City Hall station on its way back uptown.

The Brooklyn Bridge station used to have more eagles, but they gave way to an ugly redesign of the station in the 1960s.

Brooklyn Bridge had another abandoned station north of it–Worth Street, which was eliminated when the Brooklyn Bridge station platforms were extended, making Worth St. redundant.