Buildings that line the routes of elevated trains are always fertile ground for seekers of ancient advertising. Customers walking along Broadway in Brooklyn under the el tracks, or perhaps looking out the sides of elevated cars (which were more open in the old days than they are now) could easily be swayed by them.

No elevated line in the city offers more views of these ads than the J line in Brooklyn between Williamsburg and Jamaica. Here are just a few. 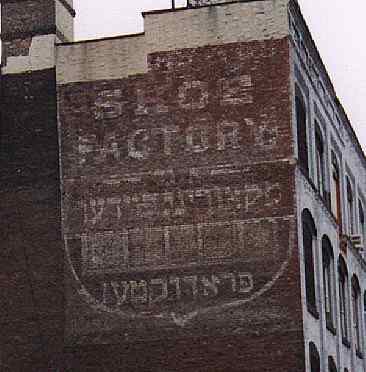 English/Yiddish shoe factory ad, visible from the Hewes Street platform. Though the characters are Hebrew, I’m told the ad is written in Yiddish.

Forgotten Fan S. Kandinsky offers a translation of the Yiddish in the ad:

Although I can speak and understand some Yiddish, you should really thank my grandpa Z. Vaysbukh, who can read and speak the language perfectly.

The line below ”Shoe Factory ” reads a word for general production of the factory besides shoes: HABERDASHERY, which means that the factory also used to make socks, shirts, bracelets, pants, etc. 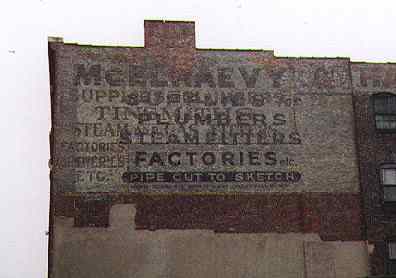 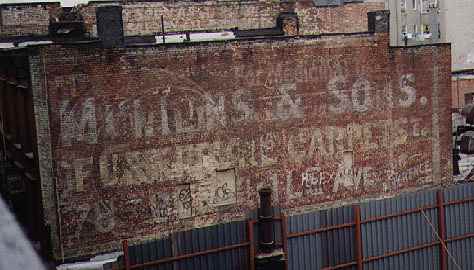 Most of this building facing is occupied by the Mullins & Sons ad for furniture and carpet. But, a sharp eye will reveal an older ad, that said “For Medicinal Purposes.” Very old printing in the style of the 1890s can be seen on the lower right. Seen from the Hewes Street platform.

Way back in the 1890s, a Dr. Tucker thought he had a general cure for pain, a remedy known as ’59’, and he let the ridership of the elevated line on Broadway know about it. Tucker’s ’59’ can be seen on many NYC photographs from the 1890s. Probably the oldest of all the ads along Broadway, this is just south of the el platform at Halsey Street. The ad at right advertises an optician and jeweler. A recent demolition exposed this ad, which is scheduled to be covered again soon by a newer building. 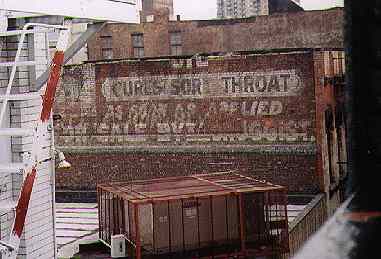 Sore throats, along with other symptoms of colds, have been awaiting cures for decades. The makers of the drug advertised here (name unknown) thought they had one. Seen from the Hewes Street elevated platform. 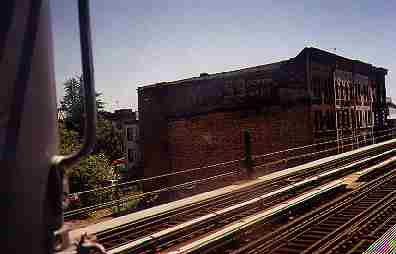 Tucker’s ad looks like this out the front of a speeding J train. 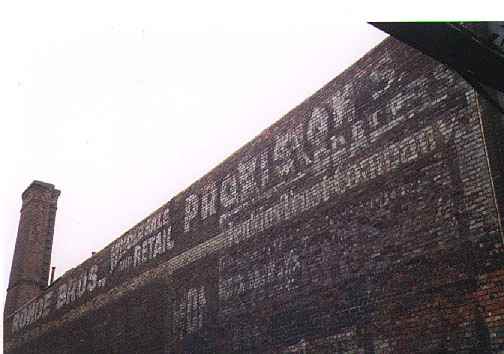 This facade is visible only from the staircase to the street on the Manhattan-bound side of the Chauncey Street platform on Broadway. There are as many as five businesses advertised here, but the two visible ones are Rohde Bros. Provisions and Jenkins Trust Company; whose ad probably dates to the 1915-1925 period. 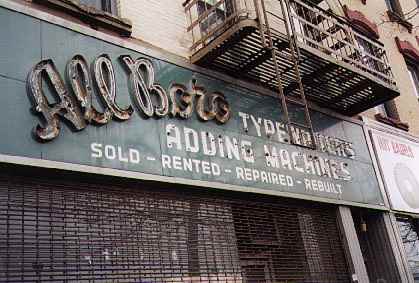 Typewriters and adding machines are dying out in the age of the computer, pocket calculators and e-mail and this shuttered storefront is indicative of that reality. This ad probably dates from the Forties, since it features no-nonsense neon (probably white) and white-on-green block lettering.

(2009: This is now being reused as a restaurant, I believe, but the neon has been removed)