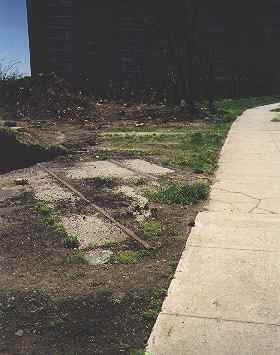 What are those railroad tracks doing running between Shell Road and West 6th Street, in Brighton Beach, Brooklyn, just south of the Belt Parkway? They’re actually the last remnants of the #50 trolley line that ran down McDonald Avenue until the mid-1950s.

According to subway historian Joe Korman, these tracks shared service: both the McDonald Avenue trolley line and the South Broklyn Railway, a freight line that ran under the Culver Line from the Brooklyn waterfront near 39th Street to the Coney Island Yard.

The Culver Line (built by Andrew Culver) eventually became part of the LIRR. In the 1920’s, as part of the BMT routes of the Dual Contracts construction, the line was elevated and connected to the West End Line at 9th Ave. The Culver line, both on the surface and later the el, connected the old Brooklyn Fifth Avenue El.

The 5th Ave el was demolished in 1940 along with many of the other Brooklyn els. The Culver trains were routed via the 4th Ave subway and the Manhattan Bridge/Nassau Loop to Chambers St. When the IND was connected to the Culver el tracks in 1954, the Culver service from Ditmas Ave continued to operate via the 4th Ave subway. By 1962 or so, the stretch between 9th Avenue and Ditmas Avenue became “orphaned” and turned into a shuttle service. After ridership diminished in the 60s and 70s, the shuttle was discontinued in 1975 and the el torn down in 1985. It was replaced by a free bus transfer to the #35 bus, which parallelled the el shuttle, until 1996, when the MetroCard made bus/subway transfers universal. 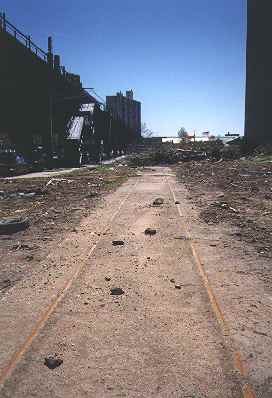 When I was little, back in 1968, I took one of my first extended bike rides to this area. They were in the process of bulldozing the local streets in this area to make room for the Warbasse Houses (to the left of this photo) and the high rise apartment buildings (to the right of the photo). Cutting horizontally across these tracks was a street called Triton Avenue, and it still had a couple of old cast-iron streetlamps along its length.

The tracks you see here continued along Triton Avenue into a private right of way into what is today the Brightwater Towers.

Even today — over 30 years later — the area still has an unfinished quality with rubble and rocks strewn about.

[By 2010 this area was enclosed by a chain link fence, and I heard, in 2012, that the tracks had been removed. Can anyone confirm?]

THE ALLEYS OF LOWER MANHATTAN

Took it with dad from Kings Highway to Church Ave. to see my Aunt and Cousin along McDonald Ave.

But on the TROLLY which ran under the elevated tracks on McDonald ave there was an amazing (for us kids) sort of a turn around with a very small cottage like booth and a circle track running around it which we thought allowed the trollys to turn around somehow. The turn around was on a lot right next to the trolly tracks. But where exactly it was on the run I am at a loss to answer.

I also remember the TRACKLESS trollys..electric busses with the overhead wires and the spring
arm which attached the electric pick up, the “shoe”. Sometimes kids would hitch a ride on the bus holding the spring electric power pick up arm and the bus driver would get out and threated to break
every bone in theri bodies if he ever saw them again near his bus…We often rode the Cortelyou
Road bus over the 7th Street.

Does anybody remember any of this? how about the underground passage of trollys on Church Avenue which ran under Ocean Parkway? My father saw some JD’s drive thier car down there
one night!!

The Culver Line was the entire line from its connections near 36th Street to the 5th Ave El and later to the 4th Ave subway all the way to Coney Island. The ramp from Ditmas Ave into the tunnel at Church Avenue opened in 1954 and effectively turned the old Culver Line into an extension of the IND subway however the whole route, including the truncated little shuttle that ran 1954-1974 from Ditmas to 9th Avenue & 39th Street is the “Culver Line”. The little trolley loop you describe is a turnback at 16th Avenue which used to see service by cars from the Church Avenue line which instead of running to the waterfront at 1st Ave & 39 St. would turn onto McDonald and run to 16th Avenue and loop back. The loop was needed to turn single-ended PCC cars. The South Bklyn RR used the McDonald Avenue tracks as far as the Coney Island yards to move freight and to deliver rolling stock.

I remember seeing a freight train on those tracks on McDonald Av when I was young.
I also remember the underground passage where the Church Av trolley would go under Ocean Parkway. I never actually got to take the trolley down there. I always wondered what was in that underground passage. The Church Av trolley is the only trolley route I can remember (was it the last one to be eliminated in Brooklyn?). Although I do remember many trolley bus routes in Brooklyn.