PUT ‘EM IN THE HALL. The Bronx Hall of Fame

Cornelius McCracken, the president of New York University, had a peach of an idea back in 1901.

He would place a classical arcade on one of the highest points in the Bronx, from which there are spectacular views of Manhattan and beyond, the Palisades of New Jersey. He would honor great Americans in the fields of government, science and the arts. He would hire the brilliant design firm of McKim, Mead and White to build a tribute to the great men (and a few women) and call it the Hall Of Fame For Great Americans. People would come to this great hall from miles around.

And come they did. For a couple of decades, at least. 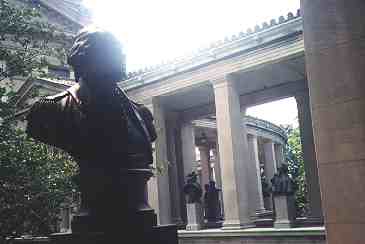 George Washington’s bust greets whatever visitors find their way to the Hall Of Fame.

This Hall Of Fame was the original, the mother of all Hall Of Fames, including the ones in Cooperstown, Canton and Springfield. Those sports Hall Of Fames are all inspired from this one, which is on the present-day campus of the Bronx Community College (CUNY) at University Avenue and Hall Of Fame Terrace (IRT #4, Burnside Avenue station).

The site was the former NYU (of which McCracken was president) and consists of the Hall Of Fame, Gould Memorial Library, and the Cornelius Baker Hall Of Philosophy.

It really does occupy a fabulous location.

Microsoft Encarta’s 1995 entry on the Hall Of Fame:

Hall of Fame For Great Americans, structure on the campus of Bronx Community College of The City University of New York in the Bronx, New York City, which honors Americans who have made significant contributions to the welfare or culture of the United States. The hall was erected in 1900. It consists of a semicircular, open-air colonnade, with a massive substructure, designed by the American architect Stanford White and overlooking the Harlem River. Bronze portrait busts by distinguished American sculptors line the colonnade.

Elections to the Hall of Fame were held every three years (every five years before 1970) and conducted by a committee of prominent representatives of the 50 states. Any United States citizen may nominate a candidate to the Hall of Fame. Candidates must have been U.S. citizens by birth or through naturalization, and must have died at least 25 years before their nomination. The original plan provided for a total selection of 102 men and women, a process that was completed by 1993.

Beginning in 1907, busts were installed along the pediments. The first twenty-nine so honored were honored with tablets (seen on the bottom under the busts) designed by Tiffany Studios.

Today, there are 97 Americans honored in the Hall Of Fame. The last busts seem to have been placed in the early 1970s.

The Hall was renovated as late as 1985, and is in terrific, spotless upkeep, but few modern day New Yorkers are aware of it.

While the Hall has certainly not outlived its usefulness, I imagine it’s seen today as a musty relic of yesteryear by those few who are aware of it. Also, the University Heights section of the Bronx has never been a tourist mecca. 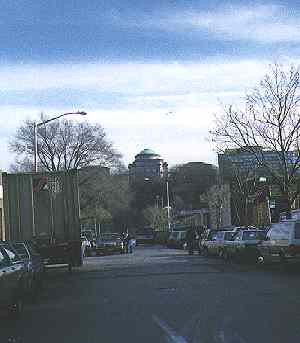 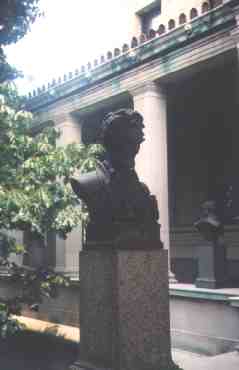 The Hall Of Fame looms over E. 203rd Street in the upper reaches of Manhattan.

Note that most of the busts’ heads are tilted slightly downwards, to convey a returned gaze to Hall patrons.

The Hall Of Fame was a marvel of its time to early 1900’s-era New Yorkers. The day we were there, there was not a soul in the Hall Of Fame except for we five Forgotteners and the occasional security guard.

It’s worth a visit alone to escape, however momentarily , the hustle and cacophony of a south Bronx afternoon. Just for a little while.

THE ALLEYS OF UPPER MANHATTAN

[…] predecessor to today’s Washington Quarter), the Marquette Memorial in Chicago, and 4 busts in the Hall of Fame of for Great Americans, among many other […]

[…] Matt and I decided we should head to the Hall of Fame for Great Americans. We continued south onto the Old Croton Aqueduct Trail, which is paved and snakes in between […]