In the 1930s and continuing into the 1950s, New York City went through a great deal of expense to eliminate its elevated trains. One by one, the celebrated els of yore came down: The Ninth Avenue, the Sixth, the Second, and finally, the Third (its Bronx tracks would not fall until 1973).

Less publicized and reminisced-upon, though, is the fact that railroad trains, both diesels and steam-belchin’ coal fired ferrous equines rumbled down the centers of a number of Manhattan avenues well into the Twentieth Century. One such avenue was Fourth, which was a virtual vast railroad yard until the trains were depressed into the tunnel where they still inhabit early in the 20th Century. Another was West Street, where mounted cowboys held off traffic with a red flag until an elevated viaduct was opened in 1934, only to be abandoned in 1980 and revived in 2009 as a public park. 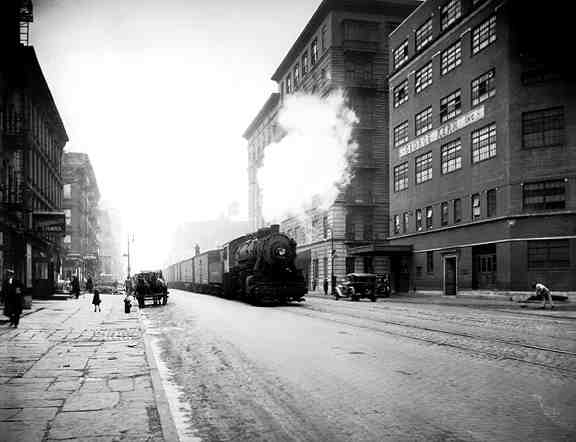 Eleventh Avenue owes its current width (it’s the only numbered avenue with a center median) to the fact that steam trains from the New York Central once chugged down the center of the avenue. Here we see a puffing freight at 11th and 41st Street. Eleventh was known as “Death Avenue” in this era because of many accidents and fatalities when the steam trains impacted automobiles and motor traffic. 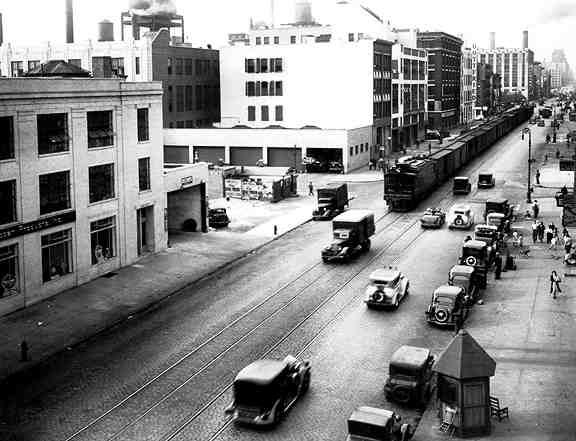 Diesel travels on Eleventh near 48th Street in this 1930s view.

NY Central tracks were subsequently depressed in a cut east of 11th Avenue in ensuing years. The tracks still travel along the Hudson River above 72nd Street and connected to the Hudson Division at Spuyten Duyvil.

Eleventh Avenue, though, continues to be the stepchild among north-south NYC thoroughfares, the “forgotten” Avenue, full of auto body and collision shops and of course, the Potemkin car dealership, as well as a hooker haven over the years. It never developed an identity of its own, like its cousins to the east. Perhaps Eleventh can be remembered as the Avenue of Trains; it was, in its distant past.

11th Avenue may see some development in 2013-2014 when the Flushing Line subway spur to 11th and West 34th Street is completed. In 2011, Governor Andrew Cuomo hoped to move the Javits Convention Center to Ozone Park and build a new neighborhood to replace it. We shall see…

PUT ‘EM IN THE HALL. The Bronx Hall of Fame