THE STARS OF ST. MARK’S PLACE 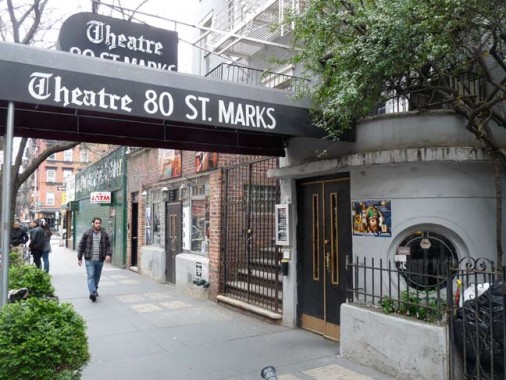 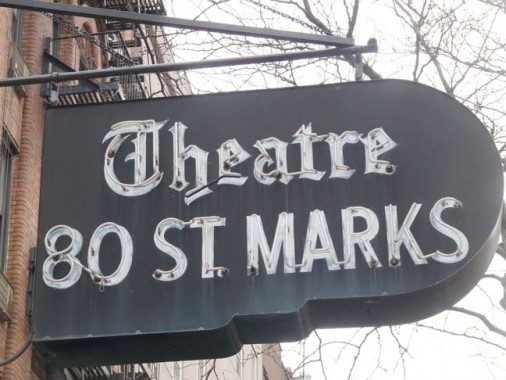 Theatre 80, at 80 St. Marks Place near First Avenue, used to be the kind of place where they ran movies from the golden era of Hollywood, the 30s to the 50s, and served you coffee in china coffee cups and cake on real porcelain.

Former actor/singer Howard Otway bought the former speakeasy from its former owner, gangster Walter Scheib (discovering two safes with $2M depoisted within, which he wisely gave to Scheib) and decided to turn it into a revival house in 1971. His dream was realized in August of that year when he threw an old-fashioned Hollywood premiere party to celebrate the opening. He invited several old-time Hollywood stars, and had them make their marks on the new sidewalk outside the theatre. By the end of 1971 several stars had visited, and managed to leave mementoes. 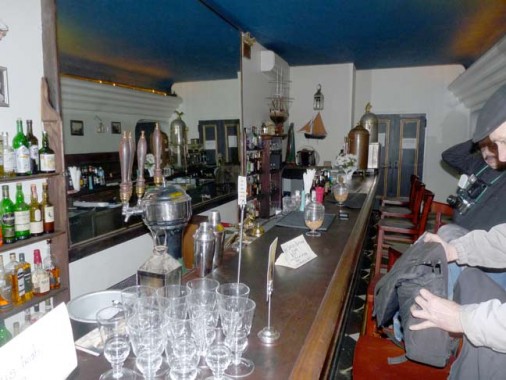 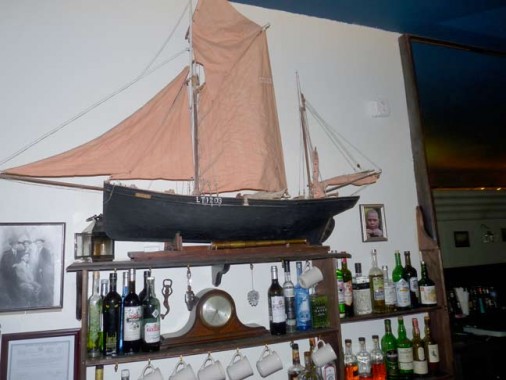 In addition to the theater, patrons can have a drink at the bar, which is left over from the speakeasy days. 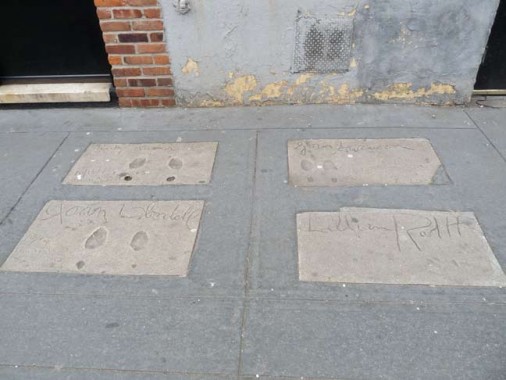 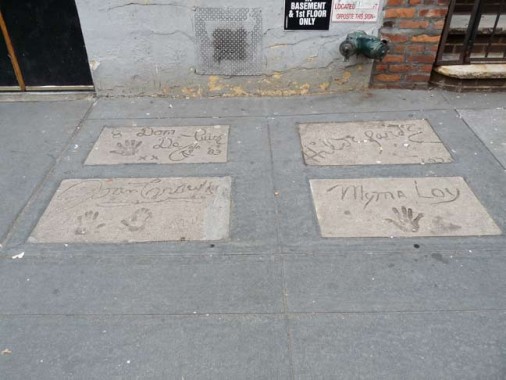 A number of imprinted blocks can be seen outside the theatre. They were jeopardized by a sidewalk replacement sveral years ago, but they were saved. 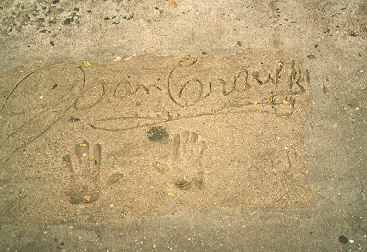 Joan Crawford, who in 1971 was starring in her last picture, Trog (a sci-fi vehicle concerning a caveman) left two handprints. 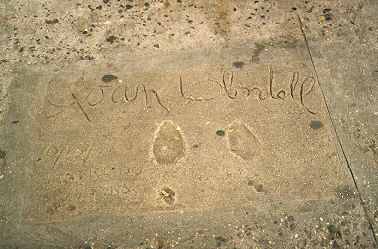 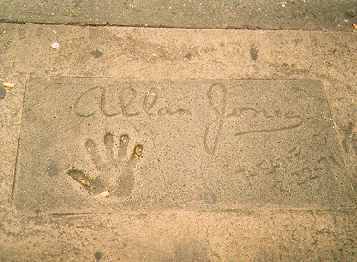 Allan Jones, a Broadway and Hollywood star who had a big hit record in 1938 with “The Donkey Serenade.” That same year, Jones had a son named Jack, who went on to have several easy-listening hits in the sixties and sang the Love Boat theme. 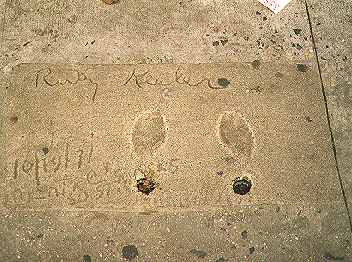 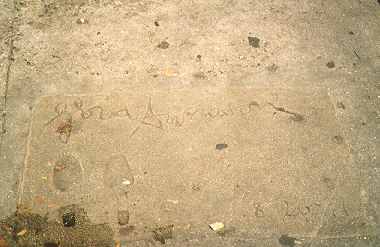 Gloria Swanson, who started in the silents and made a big comeback in Sunset Boulevard in 1950 as a former star trying to make a comeback 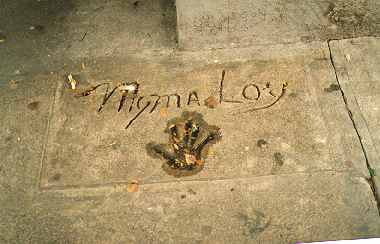 Myrna Loy of the beloved Thin Man series. Many people forget that she made dozens of silents and often appeared as Asian femme fatales! 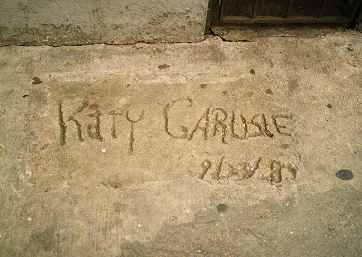 Kitty Carlisle, who starred in the 1935 Marx Brothers movie A Night At The Opera when she was 21, and later appeared in dozens of television game shows. 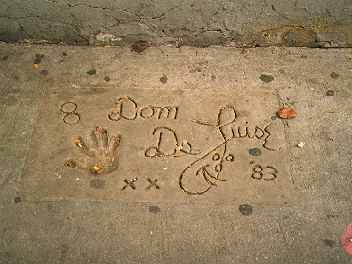 Upon the death of Howard Otway, the theater was leased out for live theater, and was managed by the Otway family trust. The original mini marquee is still there.

Home of the Pearl Theatre Company for many years, in the Summer of 2009, they announced they would be leaving the building and a new theatrical tennant was being sought. In November 2009, it was announced that the Theatre 80 St. Marks would be reopening as a movie theatre with some live theatre use. Films would be projected digitally. The new operator is Lorcan Otway, the son of the original owner of the theatre, the late Howard Otway. cinematreasures

Lorcan Otway has opened the Museum of the American Gangster on the floor above the theater.

THE ALLEYS OF UPPER MANHATTAN

ANYONE FOR ICE CREAM

Today at 62nd Street and Broadway is located the David Rubenstein Atrium, owned and operated, I believe, Lincoln Center. At that very location, I had proposed a plaque be put into place, which garnered no attention when I wrote to them. That was a couple a years ago. Why should I care? Why should anyone care about that? On that site once stood the Colonial Theater, or New Colonial, then 1887 Broadway, where on the 29th of October in 1923, opened an African-American musical, entitled, “Running Wild”, music by James P. Johnson and lyrics by Cecil Mack, produced by George White. There was a particular song introduced by Elizabeth Welch, and the dance which introduced the single most influential art form that not only epitomized the “Jazz Age”, but influenced the entire world, from America to China and beyond. This is where the greatest dance of the 1920s was put forth to the public at large and launched an era of syncopation, and emphasized or accentuated second and fourth beat. I am talking about none other than the “Charleston”. I cannot over-stress the implications or importance of this cultural and prenominal contribution of the “Charleston”, yet the folks who now own and occupy this hallowed space don’t seem to care at all about the historic significance of it. For my money, this is a slight to the African-American and US American cultural heritage.
Mike McDonald – NYC, USA

My wife and I lived in the East Village for 30 years. One of the reasons we loved the area was Howard Otway’s Theatre 80. We spent countless afternoons, evenings, and many New Year Eve’s watching the classics,as well as, many cult movie favorites. With the audience being of the same mindset, we all laughed and cried together watching the films. Whenever there were musicals, we all sang together. The coffee bar way aheadvofbits time. The seating was wonderful. Howard was such a wonderful man who made every moment special. It was his labor of love. Thanks Howard for the amazing memories and your love of seeing an audience cheer and clap.