Just as New York City’s street signs have evolved and changed over the years, so have its one-way signs, which have undergone a three-part metamorphosis in the years I have been observing their design. Each change has made the one-way sign, a vital element in traffic control, more and more visible for motor vehicles. 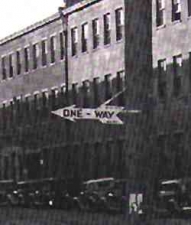 It’s impossible to see it on this faint scan, but at one time, traffic control was under the auspices of the NYC Police Department, because those are the two small words on the tail of this one-way arrow in this picture taken on Atlantic Avenue in Queens in about 1940.

Until a few years ago, there were still a few rusted remains of these original New York City one way signs still to be seen in out of the way locales. But it seems they’re mostly gone now.

Here’s one I found at Richardson St. and Kingsland Avenue in Greenpoint, Brooklyn. The sun has long ago bleached out the “One-Way” mark and the sign is rusted and twisted. But still on the utility pole where it’s been for 60+ years.

In the 50s, these signs were deemed too inconspicuous….so… 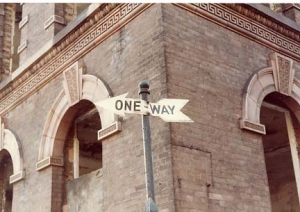 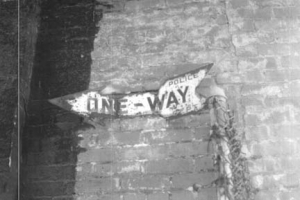 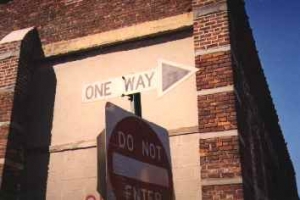 Faring somewhat better than their earlier brethren, these stylized black and white one-way signs date to the 1950s and held sway pretty much through the 60s. 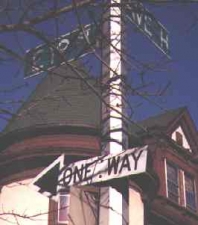 Often, they were teamed up with their contemporaries, the porcelain street signs, dangling from them fastened by a couple of brackets.

As traffic increased it was apparently thought that these signs were too inconsequential and easy to overlook, so it was necessary to dream up a design that couldn’t possibly be ignored. 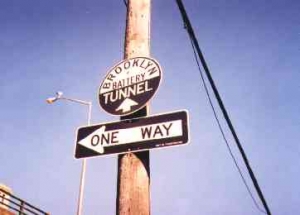 This hard to miss one-way sign was devised by the Department Of Transportation in the late 1960s and serves in the thousands on NYC streets. Apparently black is easier to spot than a plain white sign.

Got a complaint or compliment? E me at erpietri@earthlink.net.