In 1999, before High Line Park was a glimmer in the eye of preservationists (well, perhaps a small glimmer, as recounted in the new book chronicling its conversion from just another rusting, abandoned elevated rail line to the showpiece of the West Side) I took the Forgotten NY camera, which was then a point and shoot film camera, along and beneath the old elevated, to see what was there …

Why do these elevated train tracks lead straight into the side of a building?

They used to go through the building…

…because they are part of the West Side Elevated Freight Railroad (known to Lower West Siders as The High Line), an attempt by NYC in 1934 to alleviate the congestion on West Street by taking all rail and road traffic off of it.

In 1934, NYC built two viaducts, the West Side Elevated Freight Railroad to carry train traffic, and the Miller Elevated Highway to carry automobiles. The Miller was more commonly known as The West Side Highway. The elevated freight railroad was designed to pass through, or just beside, the buildings whose businesses it served, such as National Biscuit Company (still standing on 10th Avenue and 15th St as Chelsea Market), Armour Meat Packers, and the Manhattan Refrigerating Company (presently divided into apartments).

The freight railroad never caught on very well. It was first sabotaged by the Depression, and then trucking became the primary means of shipping in NYC. The section of the railroad south of Bank Street was torn down in the1960s, and sporadic service continued on the line north of Bank Street until 1980. The trestle stayed in position until the mid-1990s when the section south of Horatio Street was torn down. The sections of the extant elevated that went through buildings had some of those openings bricked up, leading to the strange situation shown above.

As for the Miller Highway, the city deferred maintenance on it for decades until, in December 1973, a truck partially fell through a hole in the road. The trestle was torn down. Plans for a combined park/expressway to be called Westway were on the drawing boards, but were defeated by environmentalists. The existing road has been repaired by the city and sports new pavements, a bike path and new streetlighting. 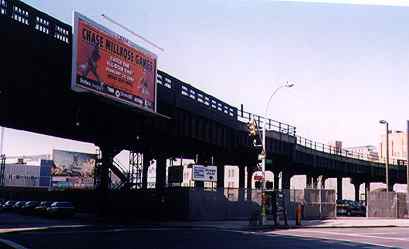 View of the old freight elevated on Tenth Avenue and 16th Street.

The sign advertises the Chase Millrose Games, the famed annual track and field event that takes place every February at Madison Square Garden. 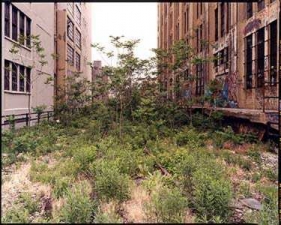 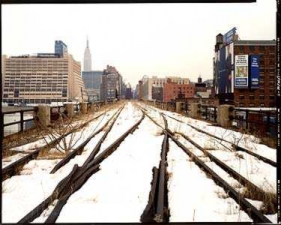 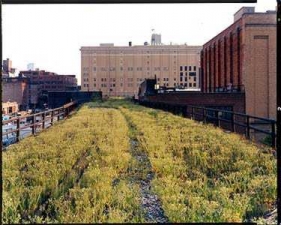 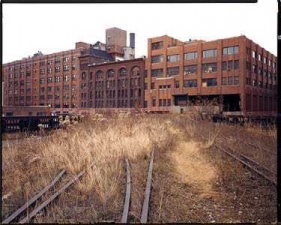 This series of extraordinary photos was taken from atop the High Line by J. Sternfeld of Friends of the High Line. As of November 2001, the High Line was in greater danger of demolition than ever before; the organization sought to prevent that seeming inevitability, and create a public pathway out of the old railbed. By 2009, their efforts were successful and the High Line opened as a public park. 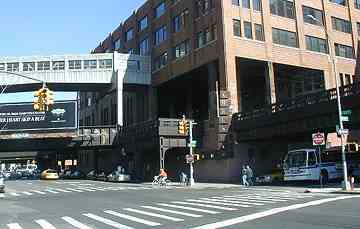 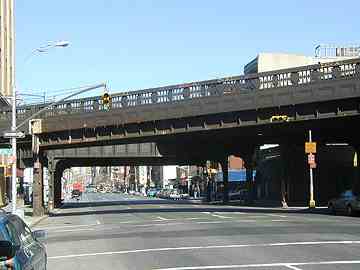 Looking north on Tenth Avenue, we can see clearly the West Side Elevated’s route through local industrial buildings. The one on the northeast corner has been reclaimed as Chelsea Market; NYC’s news channel, NY1, has relocated there. 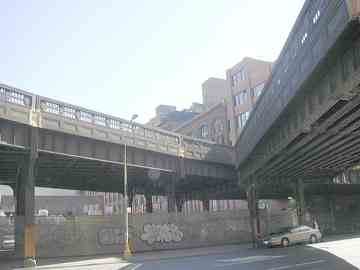 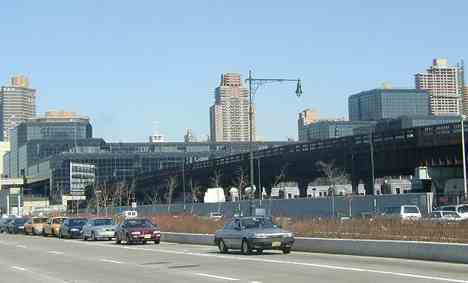 Above, the West Side Elevated arches over Tenth Avenue; below, it ascends from street level at 12th Avenue and 33rd Street. In the background is the Jacob K. Javits Convention Center.

[The latter is the only section of the High Line not yet converted to a public park. Developers hope that it too will become part of the park by 2014] 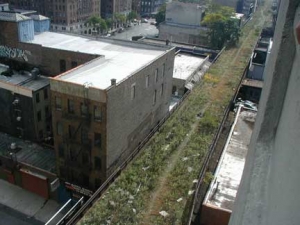 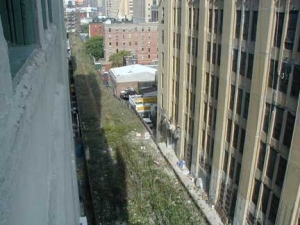 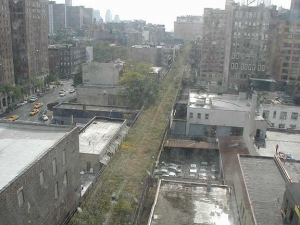 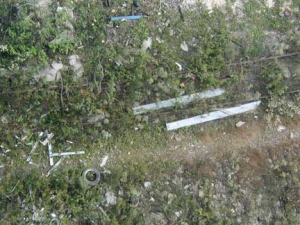 In these October 2003 views, the ‘High Line’ is seen from aloft, literally, a loft on West 25th Street. The tracks were still there amidst the refuse and weeds.

[Park developers actually installed new, unused tracks as part of the reconstruction in 2008-2009, to confer ambience; trains will never return to service there. Well, you never say never, but …] 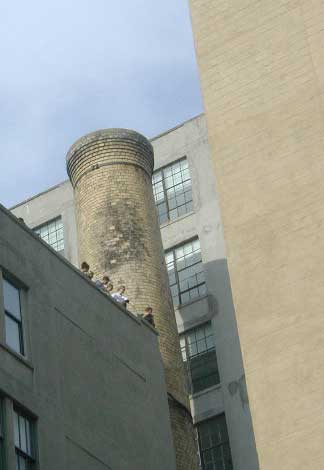 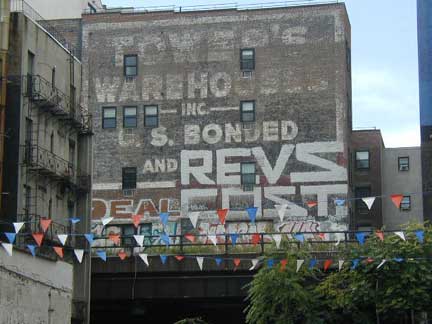 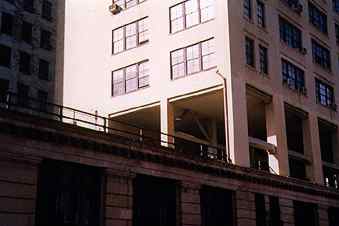 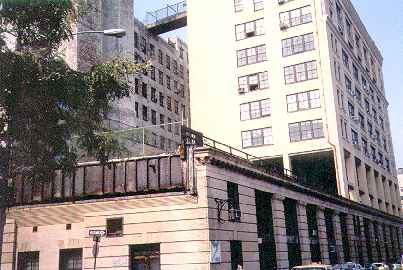 This view of a cutoff section of the West Side Elevated on Washington Street shows one of the examples of it passing through a building (originally Bell Laboratories, now the Westbeth artists’ housing complex), rather than around it.

By 2014 this will be the only extant remnant of the old freight elevated not converted to a public park. 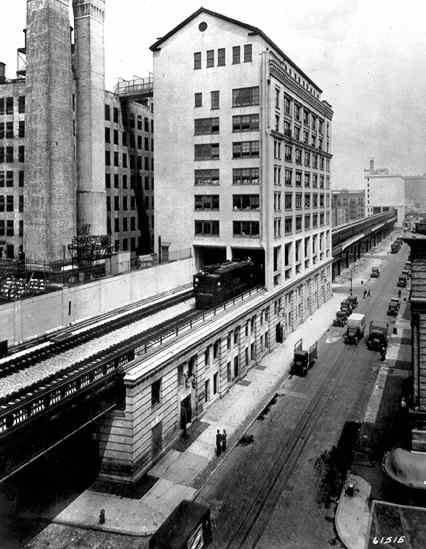 Early 1930s view showing freight train rumbling along the Elevated Freight Railroad, in the same location as the above photo. 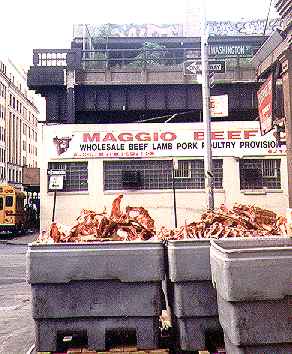 When the Meatpacking District packed meat: formerly the streets south of the western end of W. 14th Street were filled with meat wholesalers, packers and slaughterhouses and many still remained when I took this photo at Gansevoort and Washington in 2000. By 2012 the district is now filled with high-fashion boutiques and pricey restaurants — and a few meatpackers still hanging on.

Maggio Beef is of course long gone, and this is now the southern entrance of High Line Park.

FNY The High Line Section That Won’t Be a Park

photos of the complear west side freight line from the GWB south next to the WEST SIDE highway, route 9A, were it diverges from the highway. goes elevated along the highway and continuing south to its very end. these complete photos would probably come from the 1920’s.

The High Line would be great if it was not constantly inundated with people…. It is like walking through a mall in NJ… honestly, I do not understand the appeal of NYC. Too many people, no peace, and the god awful people