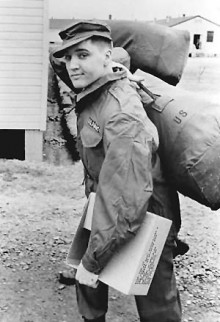 Elvis Presley was outfitted with all of his military gear at Ft Chaffee, Ark. Elvis was inducted March 24, 1958 at Memphis and spent several days at Ft. Chaffee before moving on to Ft. Hood Texas on the 28th, where he would undergo six months training. He would return to his hometown March 7, 1960 after completing his tour of duty. (By Robert Williams / The Commercial Appeal)