But we are, Dorothy.

There’s a section in Manhattan with winding, quiet streets, country villas, and gently sloping hills a lifetime away from the traffic choked gridiron and honking horns usually characterized with Manhattan.

It’s not Greenwich Village, not on Roosevelt Island and certainly not Central Park.

In fact, it’s not on the island of Manhattan at all and still, it’s in New York County, otherwise known as Manhattan.

In a little-known quirk of geography, a small piece of the borough of Manhattan, known as Marble Hill, is on the mainland. It is surrounded on three sides by the Bronx and on the south by the Harlem River.

It shares its character with the neighborhoods of Kingsbridge and Kingsbridge Heights on its north and east. It is protected from Spuyten Duyvil, on the west, by a steep hill.

So why is there a piece of Manhattan on the mainland?

Once it was a part of Manhattan Island and surrounded by the Harlem River and Spuyten Duyvil Creek. In 1895 it was separated from the island by the Harlem River Ship Canal, leaving Marble Hill as an island itself. When, in about 1917, the creek was filled, Marble Hill became a part of the mainland! No one cared much until the el was built through Marble Hill and apartment buildings were constructed in the 1920s, joining the few frame houses (see below) that were already there. 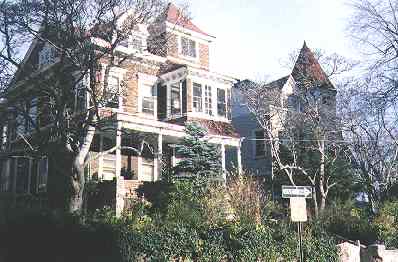 House at intersection of Jacobus, Fort Charles and Corlear Places.

The original Fort Charles was a fort in the area named for Prince Charles, the brother -in-law of George III. It was captured by the British in 1777. 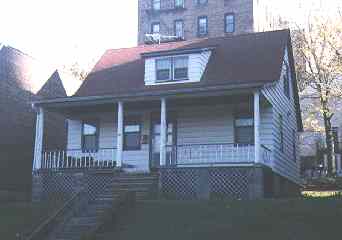 Despite its name, the view from Terrace View Avenue isn’t much–only over to Spuyten Duyvil.

It’s rare, though, to see unattached homes in the borough of Manhattan. Usually such houses are historic dwellings or have been converted to museums. 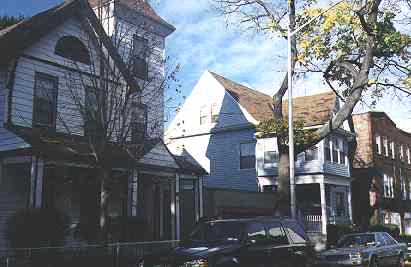 This scene on Van Corlear Place, which looks like a leafy side street in any other borough but Manhattan, is actually in Manhattan. 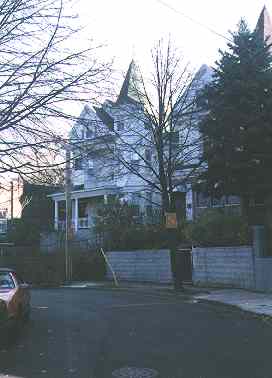 Bet you thought the only winding roads in Manhattan were in the concrete choked canyons in the Wall Street area.

This cupola-festooned house is at the curve of a bend on Van Corlear Place in Marble Hill.

Even though the Broadway Bridge crosses the Harlem River, supporting the IRT elevated carrying the #1 train, it is entirely contained in Manhattan, the only bridge carrying motor traffic and crossing a body of water to do so.

As long as there are odd quirks of geography to be ferreted out in the five boroughs, there will always be…