Queens, in many ways, is the youngest of the five boroughs. It became a part of the city when its widely separated towns joined with the Bronx, Brooklyn, Staten Island and Manhattan in 1898 to become the five boroughs. Part of Queens, though, wanted nothing to do with New York City and so the Queens towns of Hempstead, North Hempstead and Oyster Bay decided to form their own Nassau County. 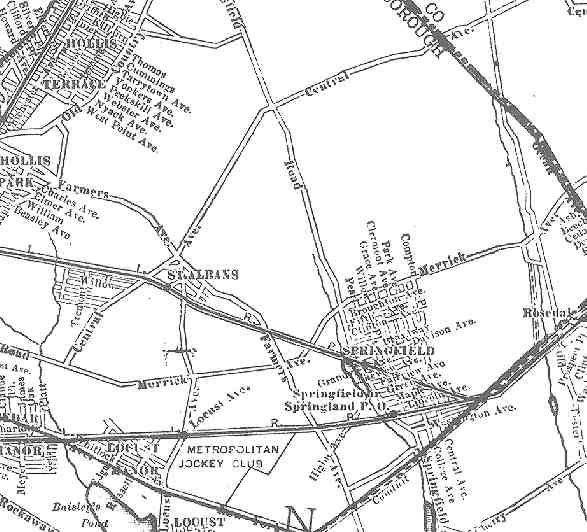 In this Hammond map of Queens ca. 1910, much of eastern Queens is barely recognizable.

So when you go looking for alleys in Queens, you’re more likely to find vestiges of old roads that were once important, but have gradually, imperceptibly, gone out of use over the long decades. Queens has quite a number of them for the intrepid alley hunter.

A short, eminently forgettable stretch of road just east of Cross Bay Boulevard between Albert Road and N. Conduit Avenue, Jaegers Lane doesn’t show up on most maps, but still existed as a dirt trail into the woods in 1999, when I originally photographed it. It remains unmarked by the DOT.

Elsewhere on Jaegers Lane was the usual abandoned car or two, but the real find was the wrecked house in the woods at the end of the lane just before you come to the Belt Parkway. At one time this house was something quite grand. It was a forgotten hulk on an abandoned road. Its address was 11 Jaegers Lane. Now demolished.

2002 update: all the scenes shown here have vanished. The old house is gone; the brush has been cleared; and new homes are being constructed on the site. Tempus is fugiting. RIP Jaegers!

[Since the Department of Transportation has never marked Jaegers Lane, I took the liberty of creating my own sign]

I returned to the site in March 2011, and Jaegers has been cleaned up extensively. The site looks like this now. Jaegers Lane is still recognizable as a short lane on Alberts Lane near Cross Bay Blvd.

Left off most Queens maps is the very short Doxsey Place, which can nevertheless be found between Silver Road and Cross Bay Boulevard north of 133rd Avenue.

Turning our attention now to Ridgewood, the part of Queens that most resembles Brooklyn because of its rows of brownstone buildings and brick apartments. Ridgewood shares a border with Brooklyn along Wyckoff and Cypress Avenues for the most part. In the past, Ridgewood was mostly a German neighborhood and was known as Old Germania Heights. The Dutch originally possessed the area and some area streets like Onderdonk Avenue and Suydam Street are Dutch in origin. Few German names persist in the neighborhood, with some exceptions…

It looks for all the world like a private driveway wedged between an apartment building and the M train elevated tracks on 60th Place, but Kleupfel Court is an actual street, appearing on city records and marked by the DOT. Two private homes are a short walk down the alley. (The DOT, true to form, misspells the street name.)

A short walk from Kleupfel Court along Putnam Avenue, which parallels the M train el tracks is tiny Stier Place, in what is (in my opinion) one of the most beautiful areas of Queens. Stier Place is hemmed in by gorgeous brownstone buildings on all sides. And, on the corner of Stier Place and Putnam is a true relic…

The Ridgewood Democratic Club is a building still pretty much in the same condition it was back in the 1930s, at the very least. Its original stained glass windows, still marked with an interlocking RDC, are still in place although cracked and somewhat the worse for wear.

According to Charles Ober, President of the Ridgewood Democratic Club, the building was purchased by the Ridgewood Democratic Club (founded 1908) in 1916. It was expanded and renovated to the current configuration in 1917 and the club moved in that year. A large two-story extension with a full basement was built to the rear of the building at that time. Shortly after the club moved into the building membership hit 1400 members; the membership hit a height of 2,000 and declined after 1950. There are currently 200 people on the club’s mailing list and approximately 100 members. The lobby of the club is rather interesting: the floor has a mosaic with the name of the club in it, and there is a painting of the founder (Carl Berger, who served as president for some twenty years) with a brass plaque under it. In 2004, the most important elected official associated with the club is Assemblywoman Catherine Nolan, who is a Ridgewood native.

The Ridgewood Democratic Club building, on Putnam Avenue, dates back to about 1902. It was originally the office of Paul Stier, Ridgewood’s largest residential home builder.

Paul Stier built more than 750 houses in Ridgewood under his own name, and after he partnered with August Bauer, they together built 200 more. A short, dead end street off of Putnam Avenue and next to what was his office, is named Stier Place in his honor. The area bordered by Fresh Pond Road and 71st, Putnam and Forest Avenues had at one time been called ‘Stierville,’ since that is where many of his homes were built. He sold his single-family houses for $5,600.

In 1915, Stier won the election for Sheriff of Queens County. This new venture proved to be his downfall. The German immigrant, who came here with nothing and fulfilled his version of the American dream, was shot dead by a crazy man in Whitestone while attempting to execute a contempt-of-court warrant in 1916. He was 42 years old at the time of his death.

Bunnecke Court is a dead-end alley on Grove Street near 60th Place in Ridgewood.

Moving on to Elmhurst, a short ride northeast from Ridgewood, we find a couple of streets that don’t look like much, but harbor some surprises when you take a closer look.

O’Connell Court, on 50th Avenue near 88th Street, looks like a number of other cul de sacs in this pleasant middle class neighborhood. But you have to walk down O’Connell Court to ascertain its true character.

Because O’Connell Court is L-shaped, residents in the inner crook of the “L” get a view of the massive Newtown High School, which towers over the little enclave like a medieval castle!

8th Road is a country lane tucked away in Whitestone between 149th and 150th Streets. It remained unpaved until the mid-1990s.

Apex Place is a short lane in Corona, just south of the LIE, connecting Yellowstone Boulevard with 62nd Drive near 108th Street. It is a remnant of the old 19yh-Century North Hempstead Plank Road.

Hill Court, a short lane on 144th Street near 14th Avenueand the Whitestone Expressway in College Point, is otherwise known as 13th Road. It’s a short private road dominated by a willow tree.

Railroad Place is a dead end off Maspeth Avenue just west of one of NYC’s rare railroad grade crossings, where the avenue is crossed by the western end of the LIRR’s Montauk Branch. This part of Queens is heavily industrialized.

Most Queens maps show a Henry Avenue running east from 70th Street and 49th Avenue southeast along the LIRR to 51st Avenue.

The road isn’t marked, but there is a fenced-in Belgian-blocked road visible on 70th north of 49th Avenue; this is likely what the mapmakers are talking about.

Maps of Woodside show a Vaux Road between 59th and 60th Streets along the LIRR north of Roosevelt Avenue. This paved parking lot is likely what remains of the road, which was likely named for Calvert Vaux, who, along with Frederick Olmstead, designed and built Central and Prospect Parks. Vaux pronounced his name as it was spelled, to rhyme with “hawks.”

Grosvenor Lane is just one of he curving lanes laid out by Albon Platt Man when developing Kew Gardens, but is by far the narrowest.

Narrow Carlton Place, between Linden Place and Leavit Street north of Northern Blvd.,  is bordered with two-family homes and a parking lot; most of the rest of Flushing is dominated by apartment buildings. It is in the shadow of Flushing’s Town Hall.

King Road runs in the old path of the LIRR Whitestone Branch, which closed in 1932.A short lane between Northern Boulevard and College Point Blvd. near the Flushing River, it is in the maze of auto collision shops that dominate western Flushing.

The view down King Road is of the old Serval Zipper factory with its distinctive clock tower. The factory is now a warehouse.

Janet Place is the first street Roosevelt Avenue encounters as it first sees the light of day after emerging from under the IRT Flushing Line el. A one block stret lined with old 2-family attached houses, it too is shadowed by the old Serval Zipper factory.

One of the last links in Jackson Heights to the large Leverich estate, this one-block street is between 35th Avenue and Road and 71st Street.

Old Lane, now marked by a stretch of sidewalk, once ran between Sanford and Franklin Avenues east of Kissena Boulavard…at least, it’s marked that way on some maps.

Ah, but this isn’t the only Old Lane in the borough…

Maps show an Old Lane in Maspeth, angling between 71st Street and Calamus Avenue. You can see where traces of it are, but the most palpable remnant is the bend 72nd Street takes south of Calamus.

FNY correspondent Christina  Wilkinson located a dead end called Dresden Street on a PropertyShark map on 59th Road between 60th Lane and 61st Street. It’s not located on any other map…so she went over there and sure enough…here it is, though it’s unmarked by he DOT.

Guinzberg Road is located in the heart of industrial Jamaica, between 150th and Tuckerton Streets south of Liberty Avenue.

E mail me at erpietri@earthlink.net.