Borough Park is thought of today as a quiet residential neighborhood between Dyker Heights and Kensington in the southwestern quadrant of Brooklyn. But, Borough Park used to have a quite different aspect. Sure, it was always pretty quiet, but until the late 1800s it was the province of farms, hay wagons and mooing cows.

Two things happened that got the rural region the impetus to become the bustling community it has become…the construction of a steam railroad that ran from Greenwood Cemetery to Coney Island that bisected the area by Charles Gunther, later NYC Mayor; and the opening of formerly vacant land to real estate development in 1886 by one Electus B. Litchfield, who called his development “Blythebourne” (from Scottish terms for ‘happy’ and ‘home.’) In 1898 Sen. William Reynolds expanded the property and renamed it Borough Park, though the Post Office on 13th Avenue and 57th (since moved to 12th and 51st) bore the name Blythebourne Branch.

The steam railroad, known originally as the Brooklyn, Bath and Coney Island Railroad, went through various stages of evolution, becoming the Bath Beach and West End Line, becoming electrified, then elevated, and finally joining the NYC subway system. These days we call it the D train.

Few artifacts remain from Blythebourne’s rural era. Prior to its development, the area was vacant or occupied by Dutch and English farmers with names like Lott, Bergen and Kouwenhoven. There were dirt roads that wended their way between the farms known as Kouwenhoven Lane, Bergen Lane (today’s 47th Street) and Lott Lane. 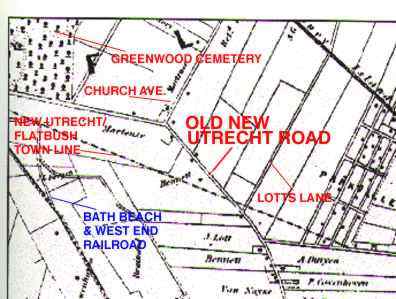 The main drag, though, in the pre-1850 era was known as the Road From New Utrecht to Flatbush, which was literally true, since the borderline between the two towns lay approximately where today’s 45th Street is today.

The map at left is from approximately 1880 and shows the farms in this area just before the Blythebourne development began. It also indicates the roads through the region. All but what is now Old New Utrecht Road have disappeared, except at the top of the page, where today’s 37th Street, Church Avenue, and Old New Utrecht Road come together.

I shouldn’t say all have disappeared. Lott Lane exists today as an odd-angled driveway on Dahill Road across the street from its intersection with 41st Street, a fact still acknowledged by the guys at Hagstrom. The street pattern of Parkville still is as it was back then (it’s an interruption of the north-south-east-west oriented street grid, and some streets have changed their names: Bergen Lane to 47th Street, and Washington Avenue to Parkville Avenue.)

Somewhere along the way, the Old Road From New Utrecht To Flatbush became known as simply New Utrecht Road and then Old New Utrecht Road, becoming one of the few streets to have both the seemingly mutually exclusive “Old” and “New” in its name. The “Old” was probably added to differentiate it from New Utrecht Avenue, which ran along the then-surface line Brooklyn, Bath and Coney Island Railroad.

Old New Utrecht Road served two purposes. It enabled local farmers to get their goods to market, and it also served as a dividing line between the farms themselves. But, after the Blythebourne and Borough Park developments got under way, the old farms were sold and then divided into lots; streets that had existed on surveyors’ charts for years were cut through in a rigid grid pattern; and our old farm roads pretty much ceased to exist as major players in the area.

And they disappeared. But wait…Old New Utrecht Road (I’ll call it ONUR to save my strength) refused to go quietly. It gradually disappeared as the decades rolled on, but originally, homes were built around it, not on it. Some of those houses are still there today.

I put my Sherlock Holmes hat on, got out my magnifying glass and searched for evidence that Old New Utrecht Road’s carts and cows once ambled through the area. And I found some evidence. 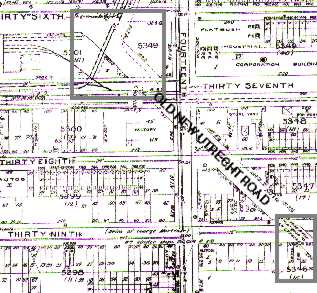 On this Belcher/Hyde map of the area, drawn in 1921, Old New Utrecht Road is beginning to disappear. New homes are popping up along its route, but the street hasn’t yet been closed, and you could still walk along its route.

I have boxed two areas where evidence of its route can still be found. The box at the upper left marks a part of ONUR that is still there, between 14th Avenue and 36th Street as you enter Kensington.

The box at the bottom is where there is a present-day remnant of the route. 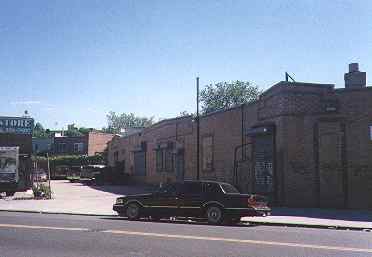 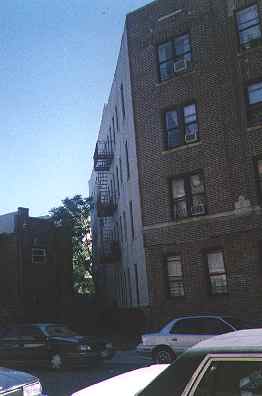 These ‘dents’ in apartment buildings on either side of 15th Avenue and 41st Street mark ONUR’s old path. The two buildings were constructed between 1920 and 1925.

Similarly, this house, at the northeast corner of 16th Avenue and 44th Street, is built at an angle. Its front lawn used to be Old New Utrecht Road, as seen on the map at right. Also notice that ONUR’s junction with Lotts Lane, a road that has been nearly obliterated, was near there.

2001: Time marches on and these houses have been demolished, no doubt to make way for another nondescript housing tract. One more ONUR remnant has disappeared.

Old New Utrecht Road continued in a generally southerly direction until it reached the junction of 18th Avenue, 53rd Street, and the Long Island Rail Road’s Bay Ridge Branch. Then it assumed the path of the present-day 18th Avenue southwest into what’s now Bensonhurst.

photo from collection of Bob Diamond

This picture shows the junction of 53nd Street (foreground), ONUR (center) 18th Avenue (top) where they crossed over the newly-depressed LIRR Bay Ridge Branch. The picture was taken in 1918. 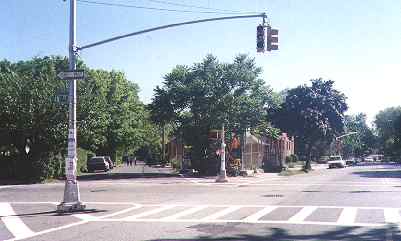 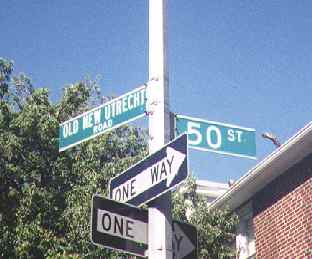 Presently, the old country lane branches off from 17th Avenue at 48th Street (top) and runs four blocks to 52nd Street. Parts of it remained happily unpaved until the early 1980s. These days, ONUR is comfortable in retirement, having served Dutch farmers, senatorial renovators, and cows very well for centuries.