Auto traffic rolling pedal-to-the-metal on busy Shore Road and Hutchinson River Parkway, up in Pelham Bay Park near the Westchester Line, pass a couple of stolid landmarks that represent the area’s close connection to the Revolutionary War. 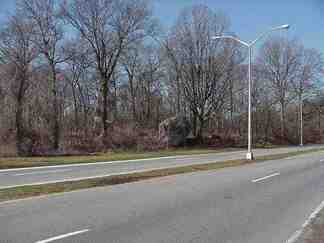 There’s a large boulder on the side of Shore Road. It looks as if it was deposited by the retreating glaciers at the close of the last Ice Age.

As much as can be determined, it was used as an Indian lookout; the area had an Indian trail long before Shore Road appeared. 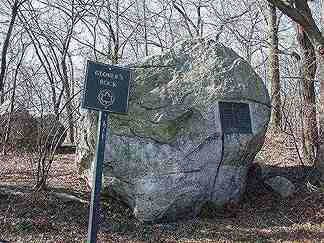 The rock’s main claim to fame, though, was that on this spot during the Revolutionary War in October 1776, Colonel John Glover and his Marblehead (MA) Regiment first engaged the British, allowing a retreating Washington to escape.

From General John Glover and his Marblehead Mariners by George Athan Billias:

In October, while the American army was retreating before the slow-moving British, Glover was given an important independent command. While Washington’s troops marched north through New York’s Westchester County to White Plains, Glover was sent to the area of Pelham Bay in order to guard the American right wing from any sweeping British attack.

Glover commanded a brigade consisting of his own regiment and three other small Massachusetts regiments, totaling approximately 750 men. On October 18th, just as Washington had anticipated, 4000 British and Hessian troops under Sir Henry Clinton and Lord Charles Cornwallis landed at Pell’s Point and made a move to attack the American line of march.

On the morning of October 18th, 1776 Glover climbed a small hill near his brigade’s encampment to scan the area with his telescope. He was surprised to see a British force with “a number of ships in the Sound under way, in a short time saw the boats upward of two hundred sail, all manned and formed in four grad divisions.” Glover had to delay the British attack, or they would push directly into the flank of the retreating Americans. In order to slow the enemy column, Glover placed his regiments behind stone walls lining the Pelham Road. As the British and Hessians pushed forward, each regiment in Glover’s brigade held their ground as long as possible, then retreated to the next regiment’s position. In this way, the enemy column was forced to fight an increasing number of Americans as it moved forward. The fight delayed the British force for an entire day, enough time for most of the Americans to reach White Plains in safety. On the 19th, Glover’s brigade slipped away to join General Charles Lee’s rear guard heading for White Plains. Glover’s own regiment served well in several skirmishes while marching toward the American lines. 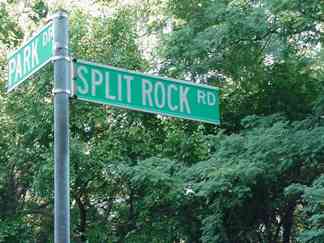 There’s another rock in the area that holds historical significance, as well as a piece of a very old, obliterated roadway.

Above Pelham Bay Park, but below the Westchester line, a street called Park Lane abuts the park. It’s bisected by the New England Thruway. Why surveyors chose to place the Bronx line above Park Lane, not at the Pelham Bay Park line, is a mystery.

In an unusual geographical quirk, several roads radiate north from Park Drive–all of them having just a few yards in the Bronx and the rest in Westchester County.

One of them, Split Rock Road, used to continue south and was an important colonial path.

From John McNamara’s History in Asphalt:

The colonial lane crossed the lands of the Pell family and passed a landmark known as the Split Rock overlooking the Hutchinson River. During the Revolutionary War, Colonel John Glover’s small forces took advantage of the stone walls that lined the sides of the road. From their positions, the Americans slowed down the advance of the British and Hessian troops in October 1776.

The road is now inside the Split Rock golf course of Pelham Bay Park and is not used for vehicular traffic.

But what about Split Rock itself? 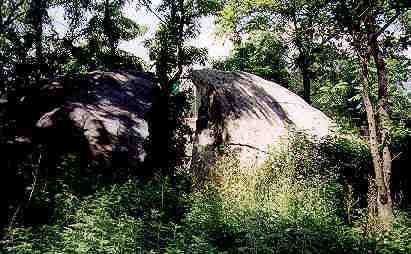 It’s still there…thanks to Bronx historian Theodore Kazimiroff (who the section of Southern Blvd. in the Bronx Botanical Gardens was renamed for).

In 1958 the New England Thruway was built. It threatened Split Rock since the boulder would have to be dynamited to push the road through.

Kazimiroff got the engineers to move the Thruway a few feet north and the rock was spared. 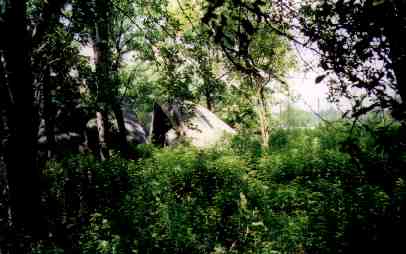 Split Rock stands near the New England Thruway where it meets the Hutch.
Photo: Donald Gilligan

So what’s the significance?

Pioneer settler Anne Hutchinson’s farm was located just over the river; peering in the ‘split’ would enable you to see its site (in the winter when there’s less foliage).

Anne Hutchinson, a religious dissenter in 1600’s Massachusetts against the restrictive Puritans, was banished from the Bay Colony and settled in this area of what would become The Bronx.

The end of the story is not a happy one; Anne Hutchinson was killed by Indians in 1643.