On October 28, 2000, one of the most beautiful days ever for a Forgotten tour, we met at the 215th Street station, one of the original IRT stations on its elevated section north of Dyckmen Street. But before meeting the other 20 Forgottoners (and one pooch), I made some observations on my own… 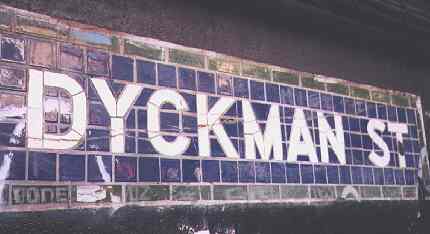 The Dyckman Street station is where the IRT #1 train, opened in 1904, emerges into daylight (after a brief one-stop sojourn at 125th Street). The tunnel emerges into the side of a hill, and so the subway tunnel can be seen from the end of the platform. There is also a one-of-a-kind blue, green and white porcelain tile “Dyckman Street” sign at the far northern end on the Bronx bound side. Other Dyckman Street signs in this station are the modern black and white signs installed in the 1980s. 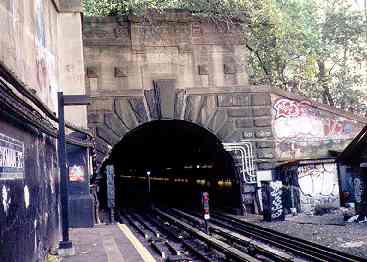 On the concrete above the keystone, there’s a inscription. What does it say?

This immediate neighborhood is called Fort George. The fort was one of many Revolutionary War garrisons in the area. It’s not to be confused with the Fort George of lower Manhattan, a British fort finally razed in the early 1800s. 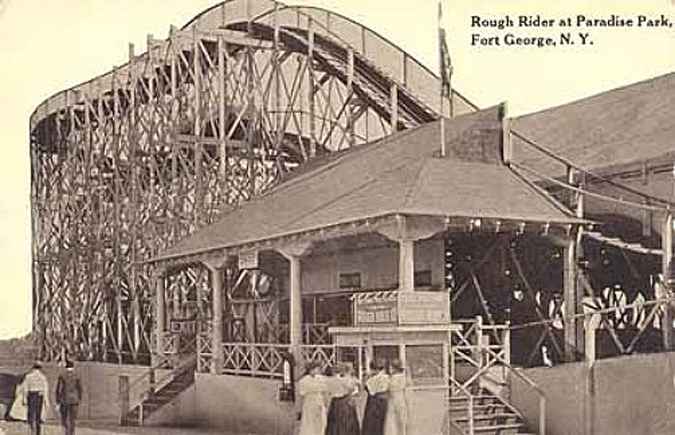 Believe it or else, there used to be an amusement park and a roller coaster on Fort George before the subway was tunneled through the hill. From the clothes, this looks like it’s from the 1890s. 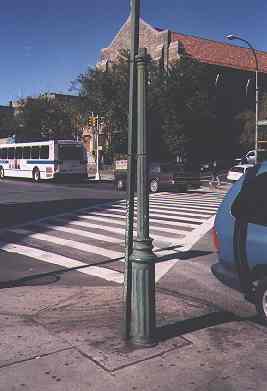 En route to the rendezvous with the Forgottoners, I passed this now-abandoned pole on Broadway and 211th. It is one of the last extant remnants of the gaslight era of streetlighting (the mid-1800s through 1900). It was connected to a gas main under the roadbed. It’s a mirace this pole is still here; I don’t know when it was last used or when the lamp itself got knocked off.

There is another gaslamp pole in Patchin Place in Greenwich Village that is now an electric light. 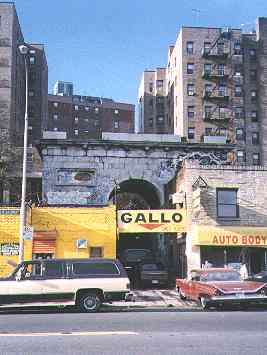 In many ways, things have gotten a whole lot better over the past 150 years. Vaccines, radio, TV, the Mets, Velveeta cheese, and so much more. This is an example of how things have NOT gotten better over the last century and a half. It’s the last remnant of the Seaman estate, one of the very first settlements in upper Manhattan, dating from the late 1600s.

2004: Gallo has moved out, the Arch was resurfaced; however, graffitits have begun to attack it once again. 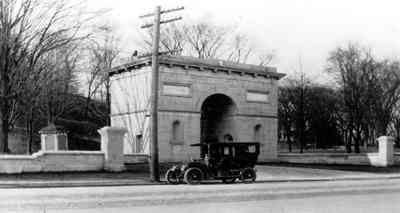 The arch was first built in 1855. Since then, buildings have gone up on either side of it as well as in front of it. Graffiti, pigeons, and acid rain, as well as neglect, have all taken their toll.

For more on the Arch, see this page as well as this website. 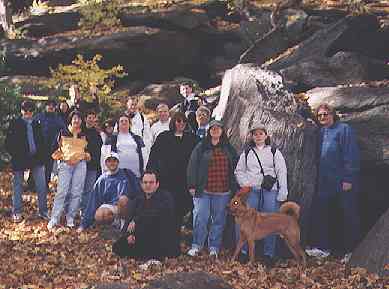 Forgottoners (and one pooch) gather at the caves of Inwood Hill Park. Not just any caves, these natural formations were used by the original inhabitants of this area, the Weekquaesgeek Indians, as shelters. Implements such as stone tools and pottery shards have been found in these natural outcroppings.

Large as Manhattan parks go, Inwood Hill Park comprises 196 acres between Dyckman Street on the south, the Hudson River on the west, and Payson and Seaman Avenues on the east. The park contains the last remnants of primeval forest on the island of Manhattan.

In the park you can also find tall, straight tulip trees, also used by the native Americans to make boats, and striated rocks that illustrate the passing of the great glaciers during the last Ice Age. Legend has it that Shorakopock Rock, deep within the park, was the site of Peter Minuit’s real estate swindle, er, purchase of the island of Manhattan from the Weekquaesgeeks for teh equivalent of today’s $24. It’s unclear where exactly it happened, though. (The last two syllables of ‘Shorakopock’ can be traced to the etymology of Kappock Street in Riverdale, about one mile to the north.) 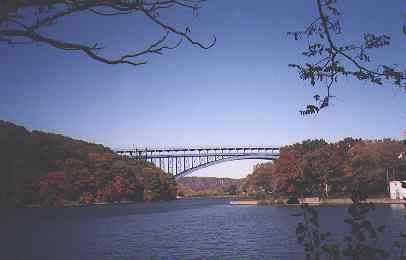 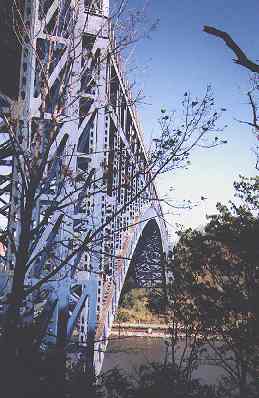 The Henry Hudson Bridge stretches across the Harlem Rver Ship Canal. In the foreground is Manhattan’s last remaining salt marsh; Manhattan Island used to be ringed with them. 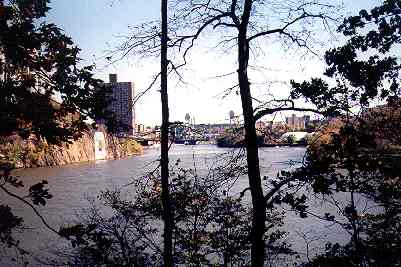 The big “C” stands for Columbia University. Nearby is Wien Stadium (Baker Field), the home field for Lions football and soccer games. 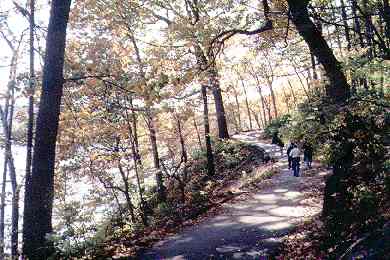 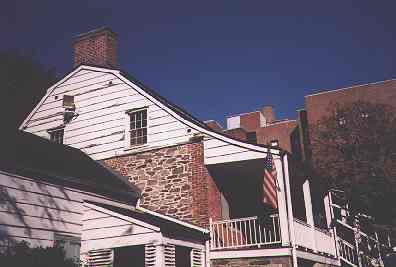 The Dyckman Farmhouse has been in this location since about 1785. It was built by William Dyckman, grandson of Jan Dyckman, who first arrived in the area from Holland in the 1600s. 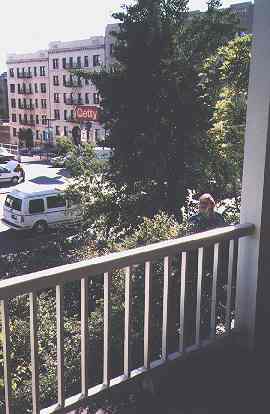 The front and back porches were added about 1825. What changes have they seen along Broadway in all those years? 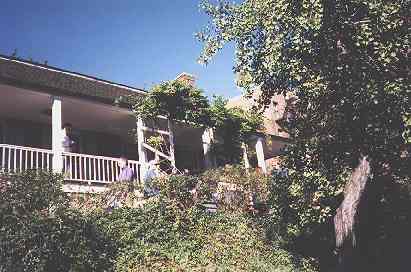 Inside the farmhouse it’s dark and cool. When the door is closed, you enter a little world of candlelight, of small, simple rooms furnished with eighteenth- and nineteenth century pieces, many based on Chippendale designs. The ceilings are low, particularly in the basement, which contains the kitchen and a small display of artifacts from the revolutionary period. As you descend, head bowed to chest level, note the intrusion of Manhattan rock on which the farmhouse is built. Many of the objects, the clay pipes, old pieces of stained silverware, wine bottles, and even bone buttons from military uniforms, were found in the garden. It was used as amilitary encampment for much of the Revolutionary period, and a replica of one of the soldiers’ log huts, complete with log roof, can be found down the path at the back of the house. This plaque, and Margaret Corbin Drive below (which connects Fort Washington Avenue with The Clositers) is dedicated to patriot Corbin, who took up arms against the Hessians and British when her husband was mortally wounded. She is one of the very few women buried at West Point.

One of the highest points in Manhattan, Fort Tryon Park is located where the namesake fort captured by British and Hessian troops had been. Sir william Tryon was the last English governor of the colony of New York. View of the Bronx from Fort Tryon Clint Eastwood collars Don Stroud in a scene from the 1968 movie “Coogan’s Bluff.”

The climactic chase scene was filmed in Fort Tryon Park.