There’s a hidden city beneath the city. Sewers, electrical wiring, water mains, traffic and train tunnels all pulse and vibrate under your feet as you walk the five boroughs. Other than steam-belching vents, manhole and coal chute covers are the only visible reminder of this underground subcity. If you walk past them without noticing, you’ll miss a lot of delicate cast-iron artwork and, just maybe, a hint of the past history of New York City. 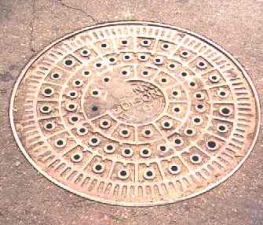 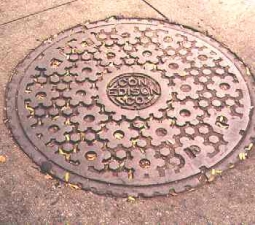 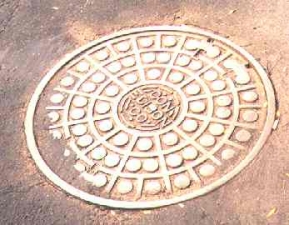 By far, Consolidated Edison, the main electrical supplier in New York City, represents the majority of mahole covers in town, but manhole cover designs are by no means monolithic, as these three pictures show.

What covers appear where might be largely random in nature, although there may be a pattern. If so, I haven’t detected one yet. 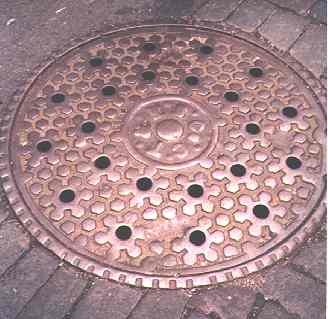 CT&ES Co. was organized in 1885 to facilitate the removal of overhead wires, which had become an eyesore, and place them underground, consructing miles of underground conduits accessible from manholes. 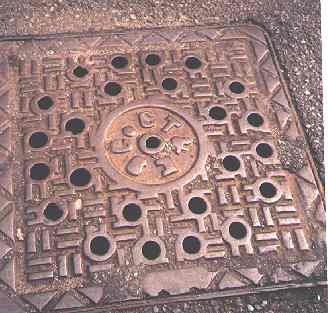 In this case ‘subway’ has nothing to do with trains, merely describing an underground passageway. CT&ES Co. was later acquired by Con Edison.

CT&ES Co. appears frequently on New York manhole covers, on square covers as well as round. 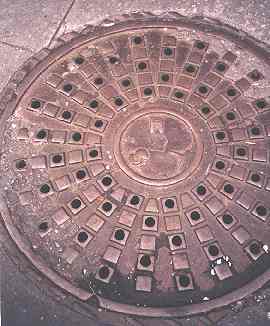 “RTS” is found frequently above subways, and of course, it stands for ‘Rapid Transit System.’ This is what happens when a manhole cover is repaced upside down. 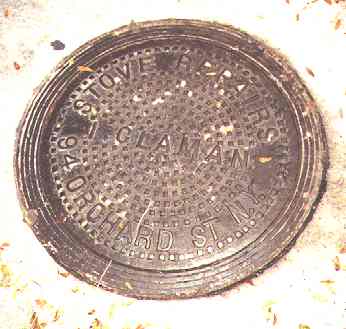 Manholes are not confined to underground electrical conduit openings. Serving as access to most underground facilities, they are emblazoned with the names and addresses of their manufacturers, most of which have disappeared long ago.

Stove repair shop I. Claman, which was located on Orchard Street on the Lower East Side, first installed this cover in the early 20th Century. 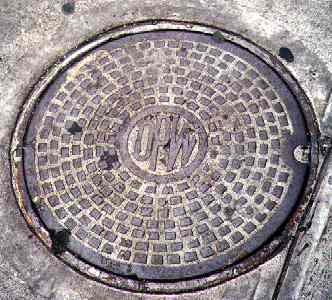 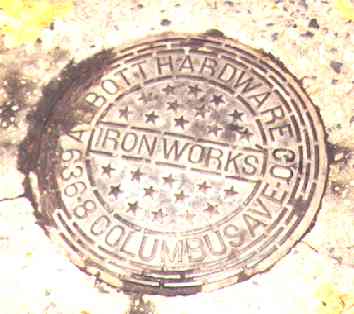 Abbott Hardware Company Ironworks located on Columbus Avenue near 92nd Street. Incidentally, this cover was found in Greenwich Village, so manufacturers placed covers all over town. 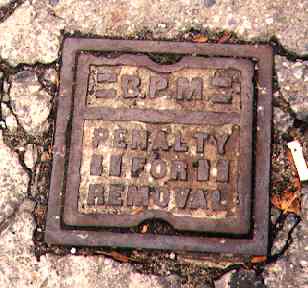 BPM=Borough President of Manhattan. I’m not sure what the penalty for removal is; maybe it’s the same as the one you get when removing tags from furniture. Note the Art Deco touches on this small cover. This is one of the oldest extant manhole covers in the city, located on tiny Jersey Street in Soho. It is an 1866 original and allowed access to the water supply from the Croton Aqueduct, located until the 1910s at Fifth Avenue and 42nd Street. 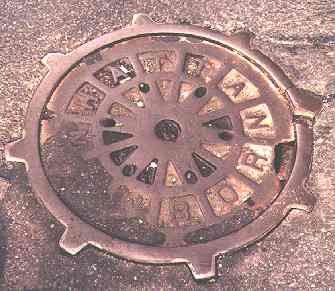 “ManhattanBor” covers can be dated post-1898, since Manhattan became a borough in that year when NYC consolidated into five boroughs. 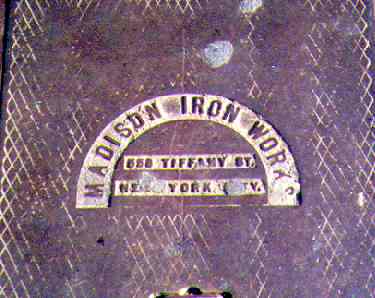 This cover, Madison Iron Works, 558 Tiffany Street, New York City, is particularly interesting because it illustrates a quirk in NYC consolidation that is mainly overlooked these days.

Between 1898 and 1914, parts of the Bronx were still a part of New York County, and Hunts Point was a part of those sections. Bronx as we know it became a separate borough in 1898 and a separate county in 1914. So, Tiffany Street was shown as being in “New York City” rather than in “The Bronx”. 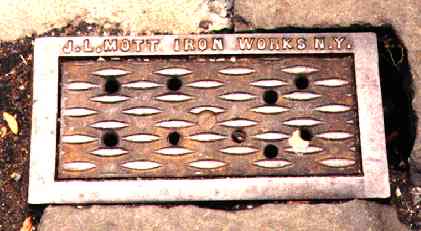 Jordan L. Mott ran a prosperous industrial complex in the South Bronx. He was granted more than 50 patents, most notably one for the anthracite coal-burning stove.

An entire section of the Bronx, Mott Haven, was named for him (The East 138th Stret subway station is still emblazoned “MH” for Mott Haven) and even today, reminders of the Mott foundry dot the streets of New York City. 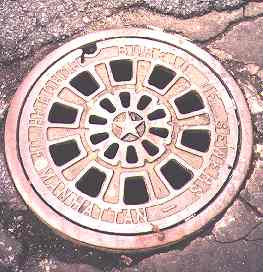 Note the intricate star-and trapezoid design on this sewer cover. New York City at one time was dotted with cast-iron foundries that produced everything from decorative railings, staircases, doors, building fronts, weathervanes, lampposts, boot scrapers, and manhole and coal chute covers. A look at the thousands of miles of sidewalks in NYC will reveal the names of these foundries, many of whose handiwork is still visible. There’s an entire section of Manhattan still dominated by beautiful cast-iron building fronts. 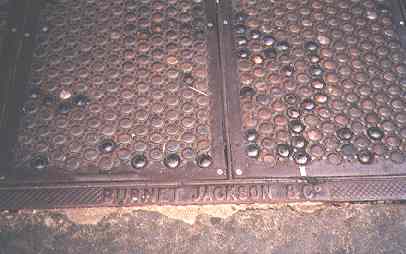 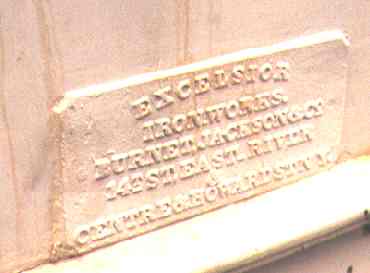 In the gaslight- and pre-gaslight era, skylights were built into sidewalks to allow as much sunlight as possible to filter into basement areas. This one, on Grand Street, was built by the Burnet Jackson Company (Excelsior Iron Works), which, if you look at the inscription at right, was located both at Centre and Howard Streets and also at 14th Street and the East River.

Some of New York’s most gorgeous cast-iron covers led to coal chutes. Even today some NYC residences and schools burn coal for heat! This one, Farrin & McCullough at 71 Watts Street, is located on St. Lukes Place. Notice the floral petal-and -dot design. The above two coal-chute covers are located at adjoining buildings on Charlton Street near 6th Avenue. Note the intricate fleur-de-lis design on the Cornell Iron Works cover. Before streets were paved, your shoes could get pretty messed up with all the mud and horse manure. What to do? Build boot scrapers into cast-iron railings. This one is on St. Lukes Place in the Village, but thousands of examples are in NYC. Presumably Kosmocrete has nothing to do with Seinfeld‘s Kosmo Kramer. 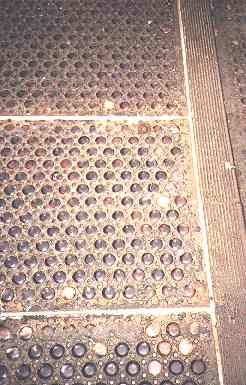 “Historic Cast-Iron Artwork”, Diana Stuart, New York Chronicle Summer 1998. Ms. Stuart often conducts tours in lower Manhattan and the information on this page was culled largely from one such tour in November, 2000.

FUTURE LIGHTS. The odd lamps of the Queens-Midtown Tunnel

Some years ago, I found someone in upstate NY who restored our two coal chute covers, even replacing lost glass lens. Another expert restored an 1889 hatch cover. Great working with these artisans.

DOES NYC HAVE COAL TUNNELS LIKE CHICAGO. IF SO WHERE WERE THEY AND HOW WERE THE WERE IN CONECTTED????

Our firm is restoring a 1890 opera house in Rogers, Arkansas. In the adjacent sidewalk is a coal chute manhole cover with several missing glass inserts. Is there a supplier for the missing glass elements?

Does any one have a Cornell Iron Works manhole cover that they would like to sell?

My great grandfather, Robert B. Walker, supposedly had an iron foundry in Rye New York in early 1900’s which made manhole covers. I would LOVE to be able to track this down!. Can you offer me ANY help or point me in a direction?

i am looking for jacob salzinger coal shute covers.
brvz23@gmail.com