POSTCARDS FROM THE EDGE OF TOWN

You’ll find a lot of books on the shelves, especially during the holiday season, that have dozens of old-time postcards of New York’s most famous landmarks…the Empire State Building, the Statue of Liberty, Central Park, and all the rest. Between about 1900 and 1950, hundreds of thousands of postcards depicting painted versions, as well as photographs, of New York’s tourist attractions abounded in cigar shops and stationery stores.

However, the intrepid artists and shutterbugs didn’t content themselves with New York’s most beaten tracks. They also made it to New York City’s furthest outposts and rendered faithful versions of scenes that are now…in some cases, Forgotten.

Forgotten Fan Peter Sefton has been sending me these images over the months, so I thought I’d gather tham on a webpage, with explanations where I have any. 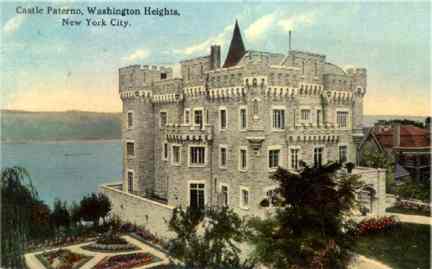 The upper west side of Manhattan, and indeed, many of the choice waterfront areas of New York City, from the mid-1800s on featured large, fortress-like mansions by the bright lights of that time. Paterno Castle, in its time, rivaled the Xanadu that Bill Gates designed for himself in Washington State.

Paterno Castle stood at what is now Cabrini Boulevard and West 181st Street in Washington Heights. Italian immigrant Charles Paterno (no relation, as far as I know, to Penn State coach Joe Paterno) built it between 1907 and 1909. It contained a mushroom cellar, a swimming pool surrounded by birdcages, and a 20′ by 80′ master bedroom. Its seven-acre site was surrounded by woods and greenhouses.

Charles Paterno and brother Joseph built many of the grand apartment buildings in the area, and by 1918 he owned 75 buildings housing about 28,000 people. In that year he built 270 Park Avenue, which takes up the entire Park-Madison-47th-48th Street block, which stood until 1960. By 1938, Paterno demolished Paterno Castle and built Castle Village, five thirteen-story towers containing 580 apartments. But the old Castle’s retaining wall can still be seen along Henry Hudson Parkway.

Paterno is remembered by the Paterno Trivium, a small triangle park at Cabrini Boulevard, Pinehurst Avenue and West 187th Street. 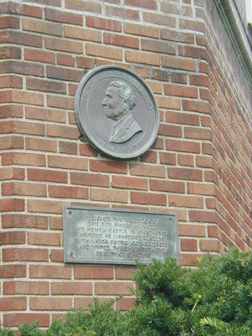 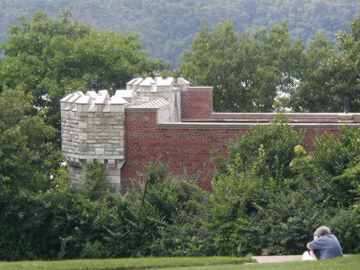 Either a small part of Paterno Castle is still there, or some of Castle Village has been designed to resemble it. At right, a plaque dedicated to Paterno in the complex.

Some of the entrance gate just south of the Cloisters does remain. 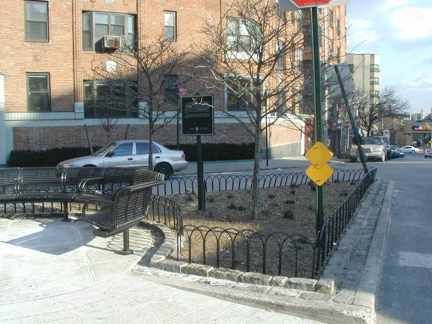 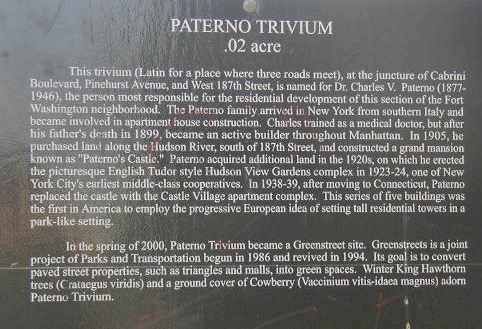 The only other public acknowledgement of the Paternos is at this small triangle, Paterno Trivium, at Cabrini Boulevard, Pinehurst Avenue and West 187th Street. 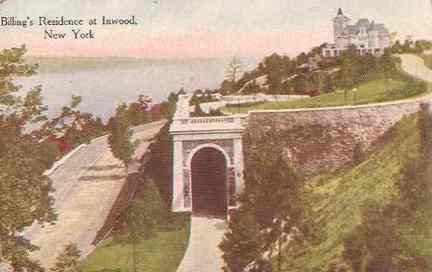 Completed in 1907,  [coke manufacturer] Billings’ magnificent home had all the trappings of the modern capitalist, a heated swimming pool, a two story squash court lined in maple and even a “fumed oak” bowling alley.

In 1916, Billings sold his beloved estate to John D. Rockefeller, Jr., who planned on destroying the home before donating the land to the City for the creation of Fort Tyron Park. The home was spared the wrecking ball after loud local protest. But like so many monuments to old New York, the home was leveled by a 1926 fire so great the Times reported, it “spouted fire and smoke like a volcano.” My Inwood 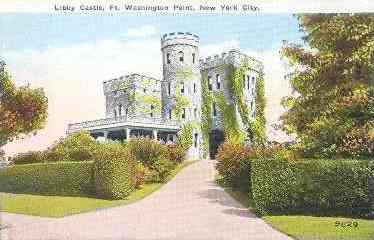 Another castle in the same neighborhood was the Libbey Castle in Washington Heights. It was once owned by General Daniel Butterfield, who composed “Taps” — before he sold it to Boss Tweed. Once again, My Inwood has the whole story behind the castle. It was demolished in 1939 for the creation of Ft. Tryon Park. It’s likely that today, the castle would have been incorporated into the park, but the city was operating under a much different modus operandi in 1939. 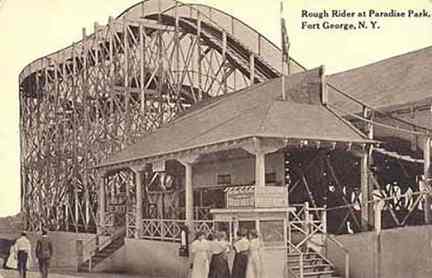 Yes, Virginia, there used to be an amusement park, complete with roller coaster, in upper Manhattan. The FortvGeorge Amusement Park, or Paradise Park, operated between 1895-1911 by the Schenk family, who later opened Palisade Park in New Jersey.

Located at the end of the Third Avenue Trolley line, the park was a natural and popular destination for locals and residents throughout the city. While the children rode the massive Ferris wheel or took to the Toboggan slide adults could gamble the night away before renting a room in the Fort George Hotel and Casino to celebrate their winnings, or more likely, mourn their losses. There were even areas in the park where, for a fee, Mom and Dad could drop the kids off in a supervised playground setting, while they went off to enjoy “The Human Ostrich” or “The Cave of Winds.” My Inwood 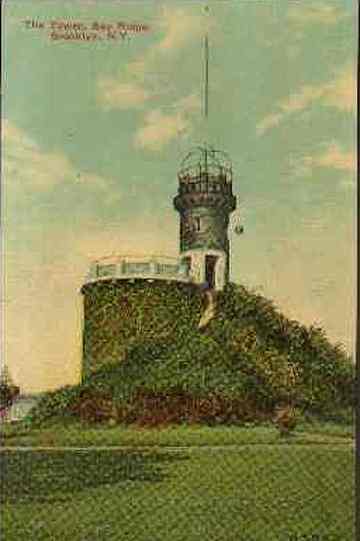 The Bayard Tower, seen in this view from about 1910, was located near the Bliss Estate in what is now Owls Head Park in Bay Ridge, Brooklyn.

Times have changed, since while Owls Head Park now fronts on the Narrows and Staten Island beyond, it also provides a spectacular view of a garbage rendering plant. 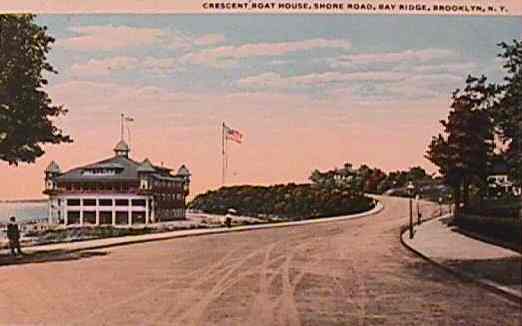 Pillared Fort Hamilton High School, which fronts Shore Road at 83rd Street, looks like the quintessential high school, the kind Wally and the Beav went to.

In the 1800s and early 1900s, though, the Crescent Athletic Club, whose boathouse is shown here, occupied the still-rural site.

From this scene, only the bend in Shore Road remains today. 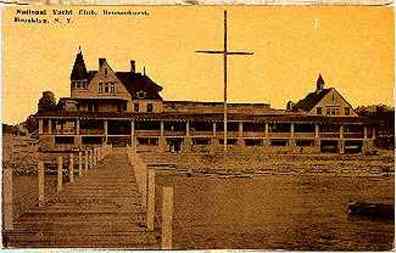 They don’t call it Bath Beach for nothing.

In its previous incarnation, the water’s edge at Bensonhurst (southeast of Bay Ridge), today dominated by the Belt Parkway, was lined with summer resorts, mansions, beaches, and boathouses, like this one. 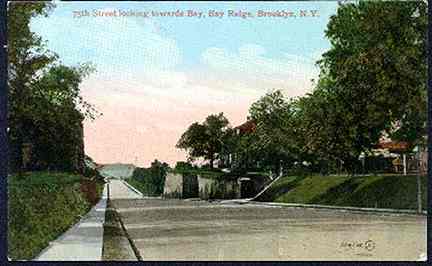 This scene from about 1910-1915 shows Bay Ridge Parkway (known to Bay Ridgeites as 75th Street) at about Ridge Boulevard as it descends a steep hill toward the Narrows.

Though new housing was built here in the 1970s, this part of Brooklyn is much the same as it was then. Why change a good thing? 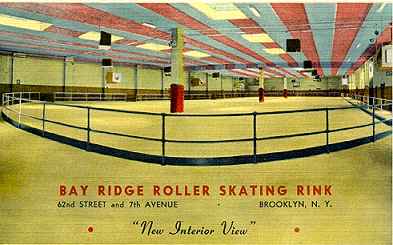 The Bay Ridge Roller Skating Rink at 62nd and 7th Avenue was later occupied by the Crazy Country Club as well as other night spots.

Indoor roller skating made a brief comeback from about 1978-1982 but then died down again.

Some postcards showed transit lines, including many that have long-since vanished from the scene: 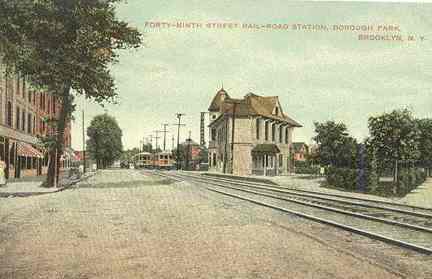 This card from 1910 shows New Utrecht Avenue and 49th Street in Borough Park. Since 1917, New Utrecht Avenue has been almost completely overshadowed by an elevated train mostly used by the D subway line, but in this long-ago era, the Brooklyn, Bath and West End Railroad ran here.

Later, the el became known as the West End line as some still call it today. 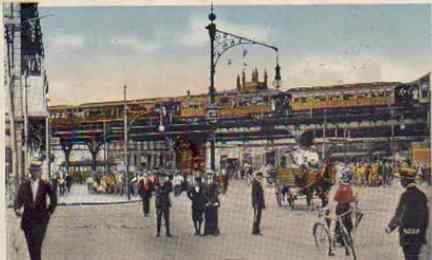 This card from about 1900-1910shows the corner of Atlantic and Flatbush Avenues.

Downtown Brooklyn used to be under a maze of elevated trains. Fulton Street, Flatbush Avenue, Adams Street, Myrtle Avenue and Hudson Avenue (most of which no longer even exists) all were under its shadow.

Shown here is the Fifth Avenue El, which parted company from the Myrtle Avenue El at Hudson Avenue, then turned down Flatbush Avenue, and then down Fifth to its terminus at Third Avenue and 65th Street.

When you add the Brooklyn terminal of the Long Island Railroad, and the BMT subway constructed in 1916, and trolleys, you might say that 1916 to about 1940 was a golden age of public transportation in New York (if you can overlook management blunders that gave you the Malbone Street Wreck, the fact that there no air conditioning and wouldn’t be till the 70s, and other things). 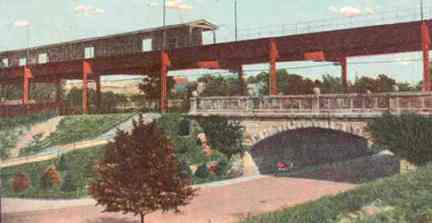 The Fifth Avenue El crosses a stone bridge over Shore Road Drive. The bridge is still there today, although the El was torn down in 1940, a victim of the BMT and the then-new IND subway lines. 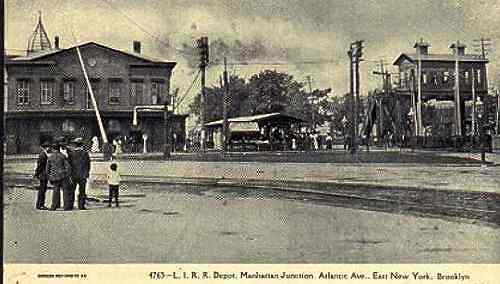 I must admit I’m somewhat stumpedabout the location of this photo, which looks to be about 1890 or so. It’s obviously the LIRR Main Line on Atlantic Avenue, which didn’t go below ground until 1940. The caption says “Manhattan Junction, East New York” so, I imagine, we’re at Van Sinderen Avenue, where the old Canarsie Line turned off. Later the line was elevated and became a part of the subway system. The card shows the Garretson Homestead, which was on today’s Main Street, Flushing opposite St. George Church, which, according to the card, was built in the 1660s. I’m not sure when it was torn down. 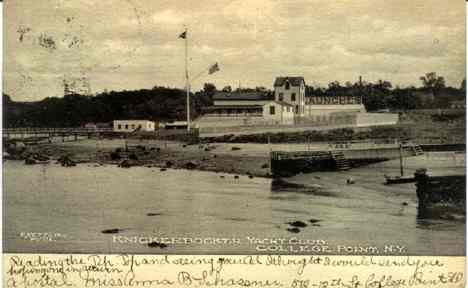 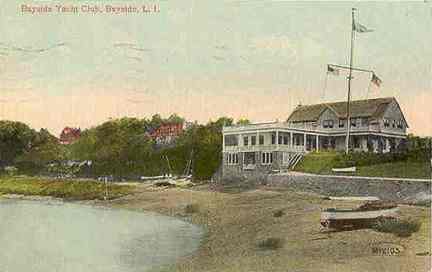 While there are still plenty of yacht clubs in New York City, the Knickerbocker Yacht Club in College Point existed about 1900. Similar was the Bayside Yacht Club. 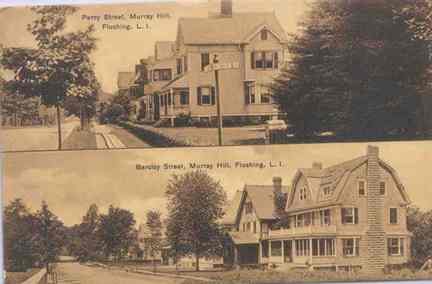 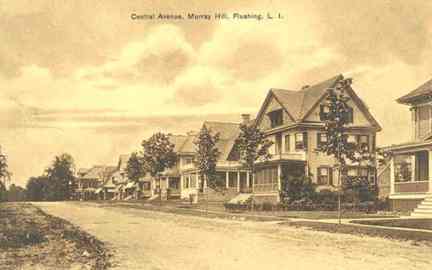 These 3 pictures, from about 1915, depict Flushing as it used to be: a tree-lined neighborhood filled with Victorian-style two-family homes with wrap-around porches. While the eastern sections of Murray Hill (the eastern part of Flushing) still resemble these photos, most of Flushing today is composed of boring high-rise apartment buildings. The old Jefferson School, at Murray Street and Sanford Avenue in Murray Hill, was replaced with a new school in 1967, which still stands. 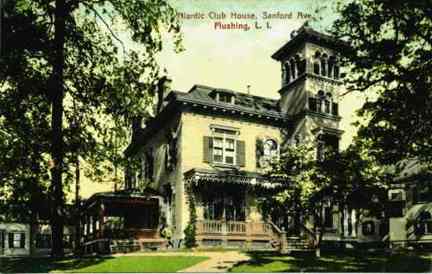 Few Victorian homes remain along Sanford Avenue in Flushing. The Niantic Clubhouse had been one of them. 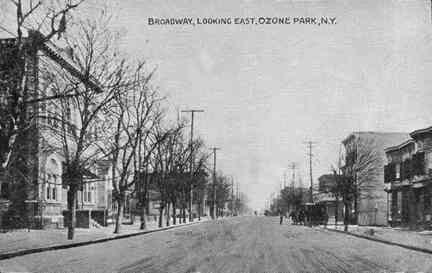 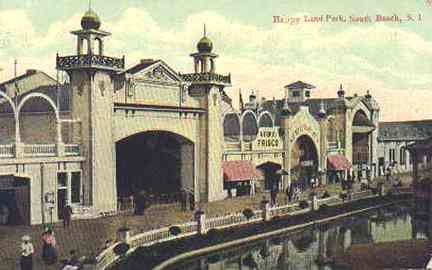 South Beach, Staten Island, is now just a shadow of its earlier incarnation as a summer resort (it used to boast its own branch of the Staten Island Rapid Transit). In its day it ALMOST rivaled Coney Island decades before easy travel between Staten Island and Brooklyn was made possible by the Verrazano-Narrows Bridge. 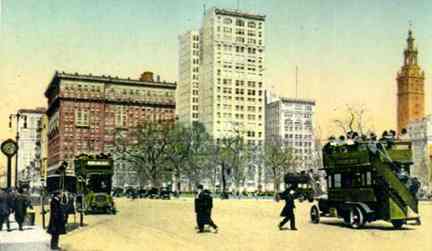 We will finish our look at postcards with a view of Madison Square Park in 1915. The clock at left is still there.

I’ve long been interested in New York City’s 17th century houses, so when you mentioned that you were not sure when the Garretson Homestead was torn down, I decided to look into it. Surprisingly, the 3rd hit on Google was another postcard, seemingly the same photograph, only not tinted, currently for sale on Ebay. This card bears the title: “Old Garretson Homestead, erected 1659, Flushing, N.Y.” Handwritten on the bottom, “This, one of the few landmarks of Flushing, is soon to be torn down.” and, on the back, the postmark : June 5, 6:00 P.M. 1916. So, there we have an approximate date for its’ destruction! There’s a Facebook share button, so I’m sending it over to your FB page.