THE BLOCKHOUSE AND THE BENCH 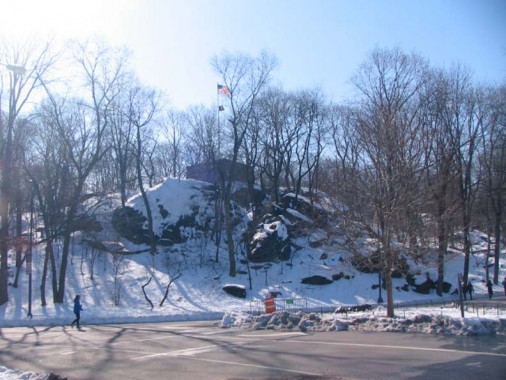 On the northern edge of Central Park, near Warrior’s Gate at Powell Blvd. (7th Avenue) the hills are steep, and rough hewn staircases ascend as high as a two or three story building. This part of the park is known as the Cliff and is one of the natural aspects that the Park’s creators, Frederick Olmsted and Calvert Vaux, allowed to remain while building the park in the 1850s.

But what we’ll be looking at today is a great deal older than Central Park itself, and is a reminder that New York City faced threats from overseas in the 19th Century as in today’s troubled era, the War Against Terror. 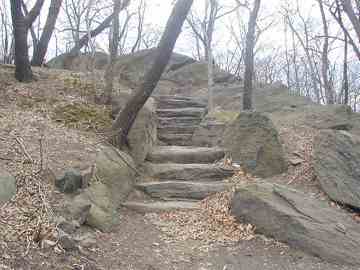 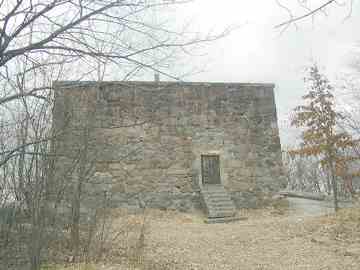 In the United States’ second war with Great Britain, on August 9, 1814, a squadron of British war vessels, the HMS Ramilles, Pactolus, Nimrod, Dispatch and Terror, commanded by Sir Thomas Masterman Hardy approached Stonington, Connecticut. Hardy demanded that the town be evacuated; Stonington’s reply was the 19th Century equivalent of “Nuts!” and the British soon began the bombardment of the town.

But the people of Stonington were a determined group and the town’s ragtag artillery corps gave as good as it got from the British over a protracted battle that lasted most of the next two days. Hardy had at his disposal explosive shells, Congreve rockets (which featured the ‘red glare’ spoken of in The Star Spangled Banner), as well as huge projectiles called carcasses and cannonballs as heavy as 25 lbs.

The Americans’ response was led by Revolutionary veteran Capt. Jeremiah Holmes, who responed with cannon fire of his own. Though 40 houses in Stonington were damaged, not one American was lost, while the British took 20 casualties and 50 wounded. At length, Hardy fired one last full broadside and moved off down Long Island Sound. The Battle of Stonington was over.

“That flag shall never come down while I am alive” –Holmes, after surrender was suggested 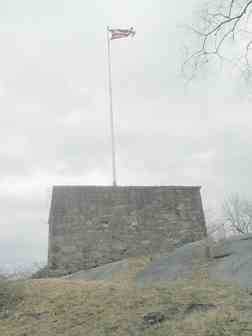 The occasion of a British attack so close to New York City galvanized New Yorkers into action. Within days of the naval battle, a call went out for fortifications to be built; firemen, lawyers, members of the Master Butchers Association, the Sons of Erin, Columbia College students and others began digging trenches and building forts along the high ground in Manhattan. A chain of major batteries was installed in upper Manhattan: Fort Clinton, Fort Fish, a battery at McGown’s Pass, Nutter’s Battery, and Blockhouse Number One were in what would later become Central Park. 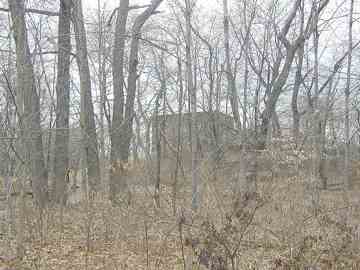 None of the batteries, fortunately, ever saw combat. The Treaty of Ghent was signed on Christmas Eve 1814, and the forts were abandoned almost overnight. (Andrew Jackson defeated the British at the Battle of New Orleans on January 1815 before word of the treaty had reached the two opposing forces.) 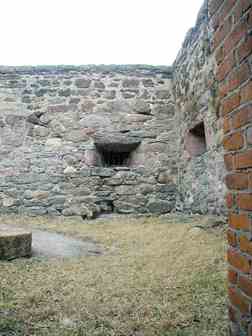 When it was built, the Blockhouse had a sunken roof with a large cannon that could be fired in any direction. The five fortifications in what would become Central Park had over 2000 militiamen garrisoned. 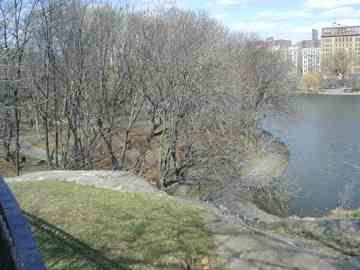 McGown’s Pass was named for a tavern run by Scotswoman Catherine McGown and her descendants from 1759 into the 1840s. (The tavern was on an aboriginal Manhattan road called Old Harlem Road; no trace of it remains, but a road it intersected, Harlem Lane, is today called St. Nicholas Avenue).

McGown’s Pass, located about midway on the southern edge of what would become Harlem Meer (opposite photo) was occupied by the British and Hessian mercenaries in 1776 and held until the end of the war in 1783. Years later when the British threatened NYC again, McGown’s Pass was once again the scene of military activity (see above).

As for McGown’s tavern, which was located south of the pass, it was purchased by the Sisters of Charity in 1847 and became a religious community center…called Mount St. Vincent. The Sisters decamped to Riverdale in the Bronx in 1860, and the site once again became a tavern and renamed once again for McGown. It was razed in 1917.

There is no trace of any military activity at McGown’s Pass today, and no signs mark its exact location. 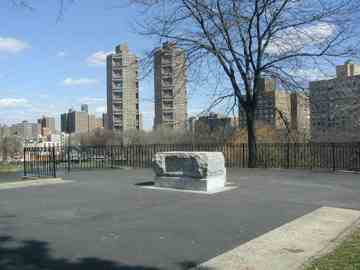 Former Fort Clinton Memorial. Schomburg Plaza, at 5th and 110th, is in the background.

Fort Clinton, just south of McGown’s Pass, is similarly unmarked, though not for lack of trying. In the 1910s, a small mortar was unearthed at the fort’s site and placed in a monument, complete with plaque.

There is nothing that threatens a vandal’s worldview more than a remembrance of the past. It reminds him that there are worthier things than himself. So a vandal will either remove such a memorial or public work, or deface it. That’s what happened here in the 1960s. The plinth where the memorial once was is still there, and few know what used to be there or know anything about the fort that was once here. 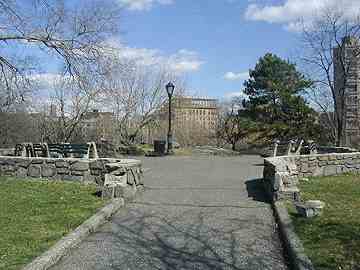 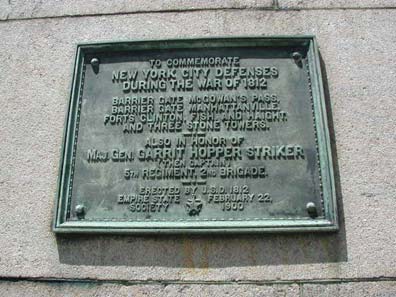 A plaque erected in 1900 commemorating Central park’s fortifications can be found on a Columbia University wall   on Amsterdam Avenue north of Central Park. 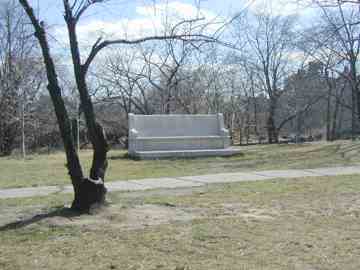 Climbing the Great Hill from Central Park Westand 103rd Street, you follow a pathway for awhile, pass The Pool (undergoing renovations) through Glen Span Arch, along a babbling brook known as Montayne’s Rivulet, and when you are in sight of Huddlestone Arch and the Lasker Rink, take a sharp detour to the right, climb some steps and you’ll find…an isolated bench smack in the middle of nowhere overlooking East Drive. What is its significance? 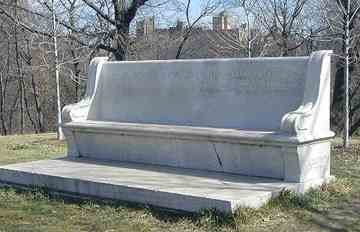 The bench is a memorial to Andrew Haswell Green, who in large part is responsible, in his capacity on the fledgling Central Park Board of Commissioners, for the Olmstead-Vaux Central Park plan being effected. He also played an important role in the formation of the Metropolitan Museum of Art, the American Museum of Natural History, the Central Park Menagerie (the Zoo), and the New York Public Library, Morningside Park, and Manhattan’s street grid above 155th Street.

After stints as President of the Board of Ed and NYC Comptroller, Green helped draft the Consolidation Law, in which unincorporated areas and municipalities of southern Westchester (the Bronx), Kings (Brooklyn), Queens, and Richmond (Staten Island) counties be consolidated with Manhattan to form the five boroughs of a greater New York City. The law took effect Jaunuary 1, 1898.

Green was shot and killed in a case of mistaken identity in 1903. In 1929, this bench, along with five new trees, were dedicated to Green. The memorial was originally at the site of McGown’s Tavern/Mount Saint Vincent’s, but was moved to its present location in the early 1980s.

We’re not sure Green would approve of this location...it’s located in nose-shot of the Central Park composting area and the stench is palpable even in midwinter.

But we’re pretty certain Green would be proud that his memorial stands on ground once fortified to defend U.S. soil; since here stood Fort Fish, which trained five heavy guns on any enemy that would dare to sail up the Harlem River.

The Battle of Stonington, James Tertius DeKay, Parnassus 1997
BUY this book at Amazon.COM

ABANDONED RAILROAD STATIONS of the Bronx

[…] examining the fort, you can see the gunports soldiers used to spot the British. Over 2,000 militiamen were stationed there during the war. One can only imagine how squished the soldiers […]

Blockhouse Mystery? I took a tour of central park round about 2004 in which we visited the brick ruins of a blockhouse. The condition of the fort was not at all the like the in tact structure I recently visited known as Blockhouse No. 1 many umages of which can be found on the web. The condition of the Blockhouse I visited a decade ago was an open air you could walk about in similar to ruins. Could I have visited Blockhouse No. 2 or Blockhouse No. 3? Has Blockhouse No. 1 been restored in the last decade? Was it in ruins? I was in the northern reaches of the park? Where were or are No. 2 and No. 3? Any info about the ruins I visited a decade ago would be greatly appreciated.