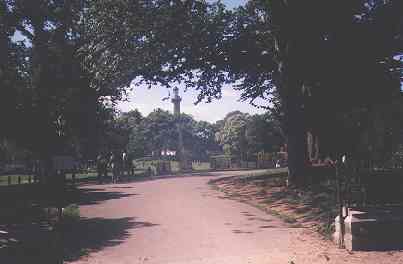 Fortgotten Greene on this website?  Can’t be…after all, this neighborhood is emblematic of urban revitalization that has come to Brooklyn since the 1980s, starting in Park Slope and radiating out to surrounding Windsor Terrace, Lefferts Gardens, Prospect Heights and Clinton Hill…even though Spike Lee moved out years ago.

Fortgotten, er, Forgotten NY being what it is, though, this page isn’t just a celebration of historic rowhouses and brownstones that line Fort Greene’s streets–worthy though they may be of remark.

What we’ll do here is take a look at some of the leftover artifacts of this neighborhood, whose rough boundaries are Flatbush Avenue Extension on the west, Washington Avenue on the east, the Brooklyn Navy Yard on the north and Atlantic Avenue on the south (though some would make Clinton Hill, east of Fort Greene Park, a distinct, separate entity), and note some of the surviving oddities, of which there are more than a few. 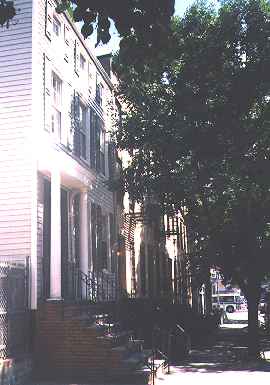 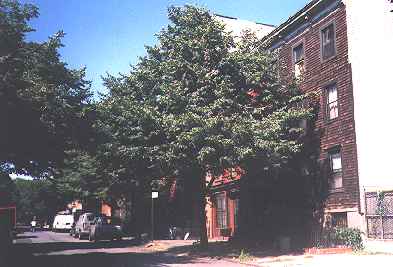 The western end of Fort Greene, the area just east of Flatbush Avenue, is a forbidding region of whizzing traffic making its way to and from the BQE and the Manhattan Bridge, and is lined with warehouses and forbidding housing projects.

A walk up Duffield Street from Flatbush, though, and you’re in a surviving pocket of rowhouses and tree-lined streets dating back at least to the late 1800s. Most of the area was like this before the Manhattan Bridge went up in 1909 and Flatbush Avenue was extended to meet it.

Like Vinegar Hill to the northwest, this oasis of green that stretches for about four square blocks is unremarked in city guides. Unlike Vinegar Hill, it doesn’t have a specific name. 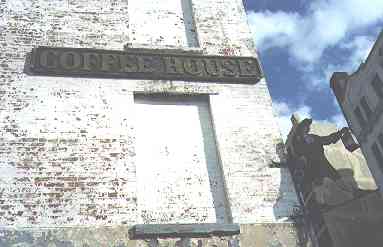 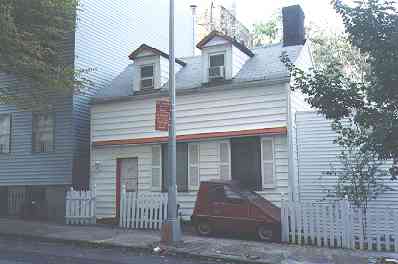 This tiny house tucked away on Concord Street has a proportionally tiny car parked in front of it. It’s one of those minuscule electric Citicars that were supposed to take over in the eco-Seventies. Here we are in the 21st Century, and gas guzzling SUVs are still firmly in control.

I discovered that the car, the Didik Long Ranger, is a hybrid gasoline/electric powered vehicle designed in the mid-1980s. It’s 96 inches long, 65 inches wide and 56 inches high and can comfortably seat three people. It can travel about 70-100 miles per charge, but the gasoline engine can power it only to a top speed of 30 MPH. It also contains solar panels to assist in charging the batteries.

The house is among the oldest in the neighborhood. It was built in 1762 and is surrounded by a stone wall dating to about 1820. The house is rumored to have participated in the Underground Railroad in the pre-Civil war era.

I was lucky enough to learn about both the car and the house from their owner…Frank Didik, inventor of the Long Ranger as well as other electric-powered vehicles such as the Didik Sun Shark, a solar-powered motorcycle, and the Didik Duplexity, a foldable scooter that rides three people. 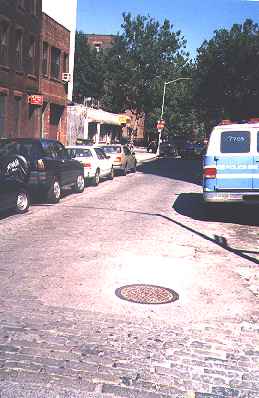 Johnson Street has kept its ancient Belgian blocks in the one block stretch between Gold Street and Prince Street. The street used to go for a few blocks further east but the Raymond Ingersoll Houses occupy its old path now. 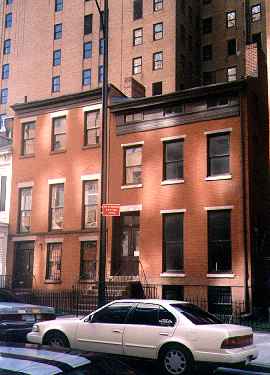 When the sprawling Metrotech Center was constructed on Fort Greene’s western edge in the 1980s, quite a few buildings had to come down. Fortunately, a couple of gems from the mid-1800s were preserved and moved to Duffield Street north of Willoughby. 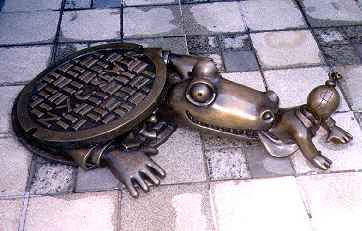 MetroTech Center, from the 1980s, may be partially responsible for Fort Greene’s comeback in the past two decades, but it hasn’t exactly been called an esthetic success, resembling a corporate campus plopped down in the midst of downtown Brooklyn on the west and residential buildings from the 1800s on the east. It has taken some pains, though, to preserve some history, and to be fair, it contains some touches of whimsy like these Tom Otterness sculptures on the sidewalk. 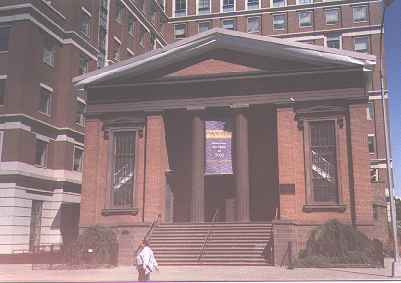 One example of MetroTech’s mercy is on the stub of Bridge Street that abuts the complex. Wunsch Hall, belonging to nearby Poly Tech (for which Johnson Street was appended the Tech Place moniker) has been remarkably preseved and stands out like a sore thumb amid the newly bland surroundings.

In the 1860s the Wesleyan was a major stop on theUnderground Railroad and was also a major haven for blacks freeing NYC’s Draft Riots of 1863. It was the first black church in Brooklyn.

In 1938 it became Albertype, a postcard factory, and was later absorbed by Poly Tech.

Why is there a street in downtown Brooklyn called Bridge Street? Old maps show that it was there long before the Brooklyn Bridge was opened in 1883. There was a proposed bridge across the East River at its northern terminus that was never built. 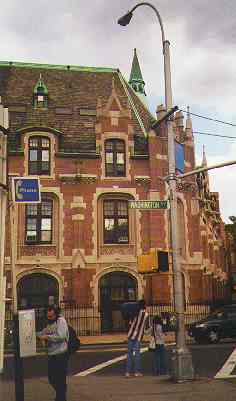 This magnificent 1915 spired, gargoyled Gothic edifice at Atlantic and Washington is not only one of the more gorgeous buildings in Fort Greene…it’s also your webmaster’s old high school.

From 1915 to 1985 this was Cathedral Prep High School, which attracted aspiring priests and other lads of the Catholic faith, of which your webmaster was one. A dwindling student body (my graduating class numbered all of 35) forced the school to close, and soon after it was converted to condominiums. Imagine living in the same room where you learned Latin a quarter century before. It’s a thought… 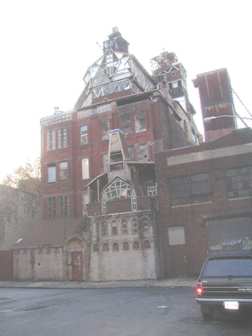 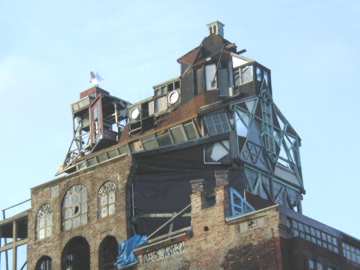 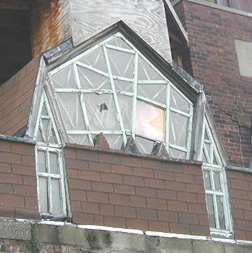 This building, on Quincy Place and Downing Street, looks like something Frank Gehry might dream up in an especially vivid flight of fancy. It is the creation of artist Arthur Wood, who has aded a full six stories of brickwork, arches, mirrors and masonry to a four story building he calls “Broken Angel.”

January 2007: “Broken Angel” is in immediate danger of being razed. It finally was…. The Myrtle Avenue El once rattled past the magnificent Church of St. Michael & St. Edward, which dates to 1902. When the El came down in 1969, the church incorporated parts of it into its altar and cross. Talk about your holy relics. Across from the street from the church once stood the Raymond Street Jail, the Tombs of Brooklyn. Raymond Street became Ashland Place, and the jail was torn down, after a century of service, for a housing project in 1964. We’re edging almost into Brooklyn Heights here but we had to note this magnificent firehouse on Jay Street just north of Willoughby, contrasted with the 1990s office building rising behind it. Built in 1892 by Frank Freeman, it is a prime example of the Romanesque Revival movement of that time. It is now used as housing for people who were rousted by the construction of MetroTech. If you’ve ever been to Boston, note the resemblace toH.H. Richardson’s Trinity Church in Copley Square. The arched doorway once had the words Fire Headquarters carved into the stone. 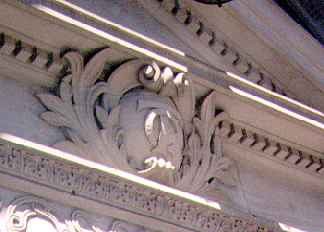 It’s just another beautiful Beaux Arts building on Willoughby and Lawrence, right? Exuberantly handsome though they may be, you usually pass these type of buildings right by. Slightly shabby and seen better days, and all that.

Actually I like the rotary dial phone myself, and make mine black please.

See, what architect R. I. Daus cleverly did is to carve telephones all over the building, the old-fashioned 1898 type, when you had to have the operator put the call through for you.

With everyone and their sister yackety-yacking on tiny wireless phones, there’ll be a time soon when nobody will remember that phones had these squiggly wires that went from the receiver to the phone, and you had to actually stand or sit close to where the phone was attached to a jack in the wall! Imagine that! Fort Greene preserves some ancient street signs which, in turn, mark some old passages that are no longer there, such as North Elliott Place’s former junction with Auburn Place as well as Willoughby Street’s old meeting with Hudson Avenue (the latter can still be made out faintly in the ‘hump’ of the sign. The Graham Home For Old Ladies on Washington Avenue has recently been rehabilitated.

The 1851 building is yet another Romanesque Revival. Fort Greene is marked by the 1929 Williamsburgh Bank building, once right up there in the Top Ten of NYC’s tallest buildings, and the Prison Ship Martyrs Monument, built in 1908 by McKim, Mead & White (builders of many NYC landmarks including the original Penn Station which stood from 1910 to 1964) to commemorate American revolutionaries held in truly barbaric conditions by the British in Wallabout Bay on board the Jersey and other boats.

New York: A Guide To The Metropolis, Gerard Wolfe, 1975 McGraw-Hill, updated 2000
BUY this book at Amazon.COM

THE BOMBS OF WALL STREET