THE BOMBS OF WALL STREET

On September 16, 1920, person or persons unknown exploded a bomb in front of 23 Wall Street, then as now the offices of J.P. Morgan Inc., causing 400 injuries, some of them horrific, and 33 deaths. 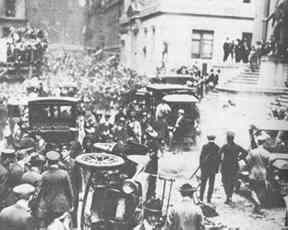 Wall Street in the aftermath of the bombing. Washington’s statue at Federal Hall (right) overlooks the carnage. 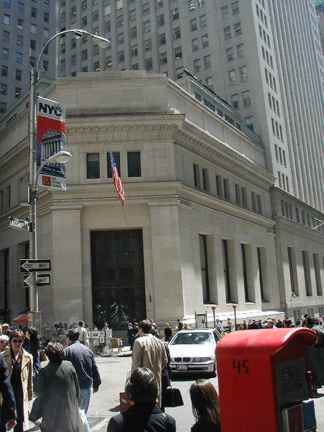 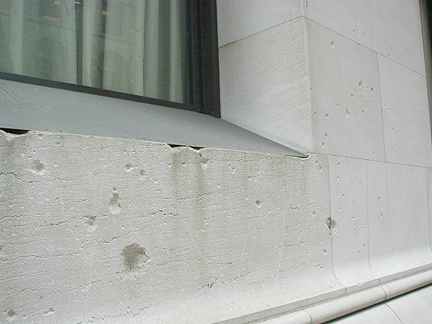 When 23 Wall Street was constructed in 1913-1914, the Morgan name was so well-known that it was considered unnecessary to mark the building with his name, and it continues to be unmarked today…except in one respect.

The exterior of 23 Wall Street is weirdly pockmarked. These marks were put there by the bombs that exploded on September 16, 1920. Morgan has never repaired the building facade, and as long as the building stands, it will never be repaired; this has been made clear by Morgan Inc. repeatedly. 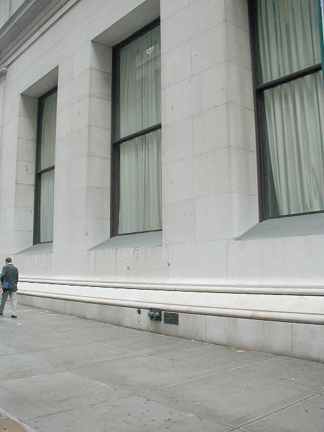 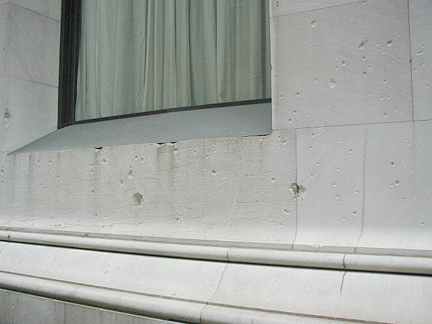 A single warning had come in the form of a note placed in a mailbox at Cedar Street and Broadway just before the blast,

Remember we will not tolerate any longer. Free the political prisoners or it will be sure death for all of you. American Anarchists Fighters.

Investigations centered on known Sicilian, Romanian and Russian terrorist groups. But no sure leads developed and the FBI dropped the case in 1940. Whoever was responsible for this crime is almost surely dead by now.

It is widely surmised that the blast was done by anarchic terrorists bent on destroying a building symbolic of American capitalism. The Bolsheviks had taken Russia by force some three years earlier.

I had no idea a much greater terrorist massacre would happen just weeks after I wrote this.

This is a fantastic plus beneficial bit of data. Now i am happy that you provided this useful info around. Be sure to keep us up to date like that. Thanks for spreading.

[…] Sacco and Bartolomeo Vanzetti for murder. A few days after the bombing, a note was found in a mailbox at Cedar Street and Broadway that […]

One of the victims Ludolf Portong is buried at Maple Grove Cemetery in Kew Gardens in his family plot. Born in 1892, Ludolf was only 28 when he was killed. He had served in WWI, wounded by shrapnel in France during his two years there and when he returned got a job as a teller in the National city Bank, which is almost directly opposite the Morgan bank. He was on his way to lunch, when the bomb went off. He was killed instantly by the concussion, it is believed, because it was reported that there were only two gashes on his face. He was killed on the sidewalk directly opposite the Morgan Building. Sadly there is no memorial to the 38 people who were killed in the bombing, but Maple Grove plans to set up a monument in the cemetery in time for the 101st Anniversary of the Wall St. bombing in Sept 2021.