In Queens, the Long Island Rail Road has certainly left remnants of its golden era of passenger trains. The Rockaway Branch is still there, waiting to be reactivated or converted into something worthwhile, and Kissena Corridor Park in Flushing traces the ancient LIRR connection from the main line through Creedmoor to the Port Washington branch (at about where Shea Stadium is now.) In Brooklyn, the Bay Ridge Branch, long abandoned by passenger trains, still carries the odd freight now and then.

The LIRR used to carry a lot of freight in addition to its human cargo; on this Forgotten page, we’ll explore remnants of the LIRR’s industrial past. 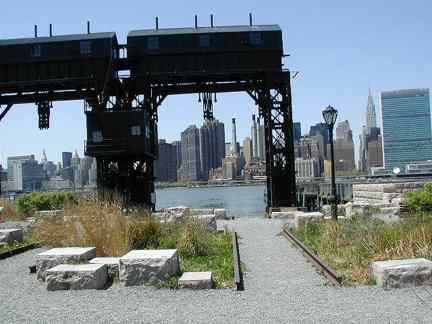 Gantry State Park, Hunters Point, Queens. Through the gantry cranes can be seen the 1987 Corinthian Apartments complex; to its right are the Chrysler Building (1930) and to its immediate right, the UN Secretariat Building (1949)

But it’s the two tracks in the foreground that concern us here. 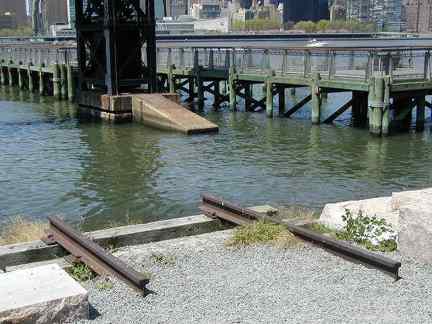 Gantry State Park is located in a new development at water’s edge known as Queens West. It makes a handsome riverside addition to New York City, which has shamelessly left undeveloped an incredibly large volume of waterside property which really should be available to the public as parkland.

The park is a bit restricted though. Your webmaster first found Gantry State Park on a bicycle; a zealous security guard fascistical…er, diligently told me to dismount. To spite him and the Queens West developers, I rode away. When I again explored the park on foot this time, I noticed these tracks at water’s edge.

The LIRR spur can still be seen in several spots. It runs just south of 48th Avenue from Jackson Avenue west to the waterfront. From Jackson Avenue to Vernon Boulevard, it is a garbage-strewn lot, but from Vernon Boulevard west to the waterfront it is a playground as well as Gantry State Park at its western edge. By June 2003, that lot had been compeltely filled in and was no longetr visible.

A large curiosity of the spur was torn down in the 1990s: a large trestle bridge took Vernon Boulevard over the spur, but most of it was dismantled and today you would never know it had ever been there. 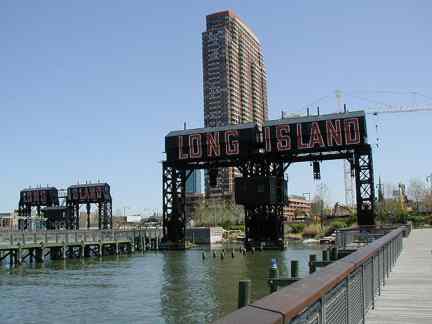 Barge transfer gantries as seen from the new East River pier. Goods were floated across the river on barges, and transferred to a spur of the Long Island Rail Road at water’s edge in Hunters’ Point. A new apartment tower in the Queens West development is in the background. 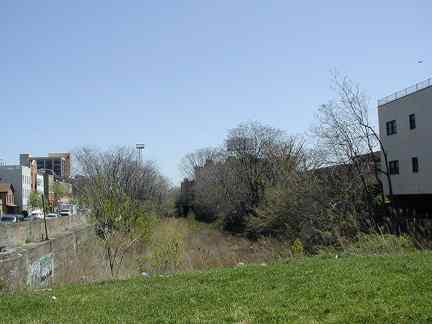 Site of the LIRR spur as seen from Vernon Boulevard [2016: this site now occupied by a public park]

Railroad-boat links are now surprisingly rare. Remnants of another one can be seen on the upper west side. The most famous boat-train link is, of course, the Staten Island Ferry Terminal. 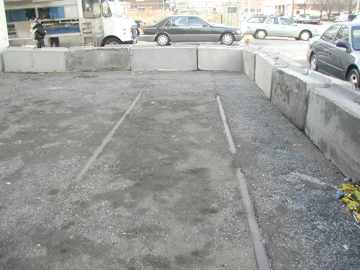 Meanwhile, on 47th Avenue in Sunnyside, just a few blocks away…

…there’s a set of railroad tracks, complete with a now-decorated flatcar, in front of an industrial loft building.

Is it a remnant of one of the passenger lines that existed in western Queens before being bought up and absorbed by the Long Island Rail Road?

Unfortunately they are not. They are a remnant of an extensive railroad network through this industrial area.

Trains would connect from these tracks via a routing from the Sunyside Yard over the Montauk Cutoff overpass over Skillman Avenue just north of 49th Avenue, and would run on a trunk line along Skillman and 47th Avenues with spurs along many of the side streets.

This small freight line served warehouses of NYC’s great department stores such as Gimbels, Kleins, and Macys; some of their names can still be seen on buildings. Sunshine Bakeries, American Chicle gum and Swingline, with its famous neon sign were here as well. Swingline decamped to Mexico in the mid 1990s.

This was originally a private railroad known as Degnon.The LIRR absorbed it in 1928, and while all official rail activities ceased here in 1985, it’s still possible to run trains on some of the trackage; the connection at the Montauk Cutoff has been preserved.

This is the switch track that connected the Degnon Terminal tracks to the Montauk Cutoff (which in turn was the connection from the LIRR Montauk Branch, which ran to Jamaica and points east) to the Sunnyside Yards. 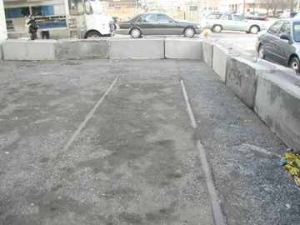 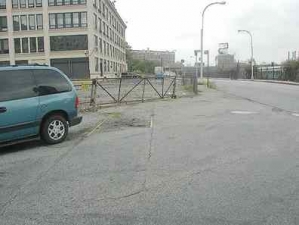 Above, two views along Skillman Avenue 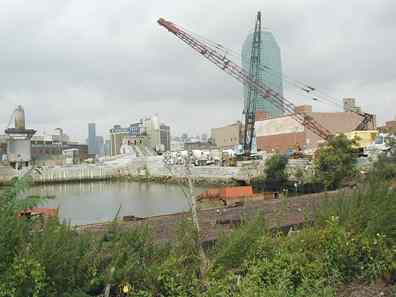 The headwaters of Dutch Kills, with the 45-story Citicorp Building in the background. Degnon trackage ran alongside the creek to allow shipping to unload goods. 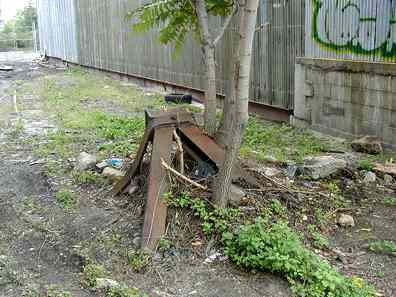 A bumper near Review Avenue has succumbed to the ravages of nature. This was near the siding for Horowitz and Margareton, matzoh manufacturers.

Sam Berliner has information on the old Degnon line, plus other small NYC railroads plus excellent track maps.

Thanks to the departed Bernard Ente and J.J. Earl for assistance with this page.

BEEN GOOD TO GNOME YA: Manhattan’s Door Creatures