Conducted in glorious drizzle and rain, about 20 Forgotten fans visited several surprising scenes in Hell’s Kitchen, that formerly nefarious Times Square back yard running from about 34th Street north to 57th and from 8th Avenue to the Hudson. On this tour, Your Webmaster was demoted to a mere tourist as longtime Hell’s Kitchen resident and Broadway stage manager Renee Stanley showed us where all the good stuff was! 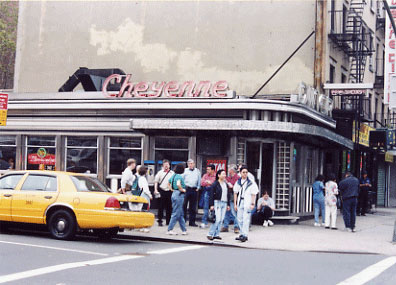 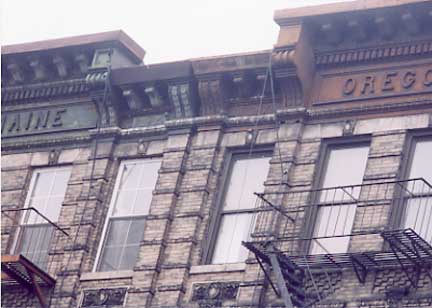 When these buildings on 9th Avenue were erected in the 1890s, the architect felt that it was as far out of town as development was likely to go and he playfully named them “Maine” and “Oregon.” In a similar spirit, Henry Hardenburgh’s grand apartment building on Central Park and West 72nd Street was named the Dakota. Photo: Mike Olshan 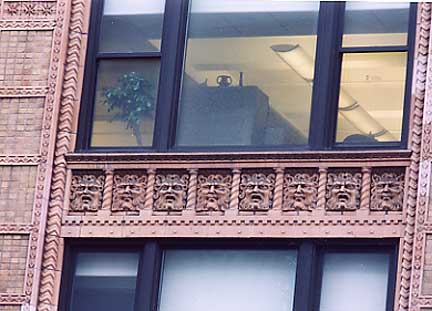 A flock of Green Men salute us on 9th Avenue and West 35th Street. The Green Man is a representation of fertility and renewal dating back to the Middle Ages and possibly previously. He is depicted as a bearded figure, but with foliage substituted for hair. More rarely, a Green Woman can be seen. 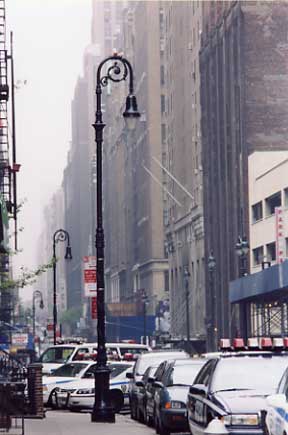 A flock of Neo-Crooks on a side street in the mid-30s. They are exact copies of original Bishop Crook lamps that were originally installed in NYC streets in the 1890s and were standard issue until about 1950. Photo: Mike Olshan Cry Havoc: this brownstone, on West 44th next door to the Actors Studio, was once inhabited by actress June Havoc (Gypsy Rose Lee’s sister) from 1962-69; she brought in psychic investigator Dr. Hans Holzer when she heard and saw some ghostlike manifestations. Research indicates that this was once a “potters’ field”, so if there are any restless spirits, it’s a logical place for them. 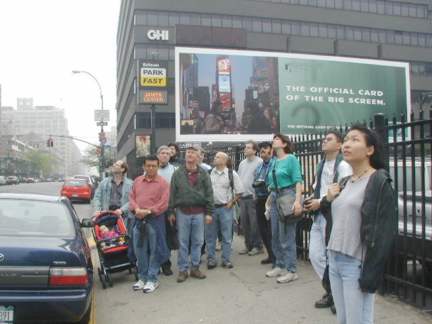 Things are looking up: Forgottoners, with tour leader Renee (green shirt) and our youngest Forgottoner to date, examine yet another Hell’s Kitchen oddity. 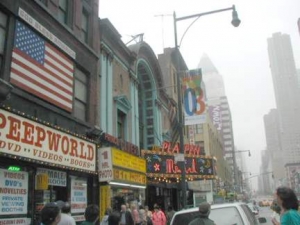 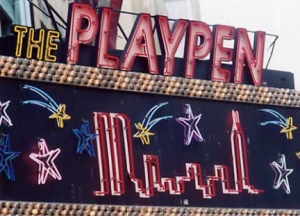 Who says porn is dead? Anyone walking north of 42nd Street on 8th Avenue will change their mind fast. “The Deuce” has moved over here! The Playpen Theatre is notable for being the former Cameo (the last old vaudeville theatre left, except possibly for the Variety on 3rd Avenue near 14th Street). A close inspection reveals two female figures above the door, one holding a film canister and the other, a camera. These could be playful depictions of Greek mythological Muses, though there was no Muse of Photography, of course. The Playpen neon sign still shows the Twin Towers. Photos: Mike Olshan 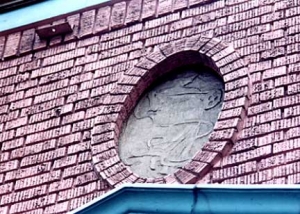 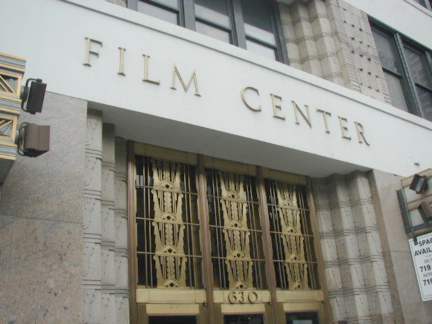 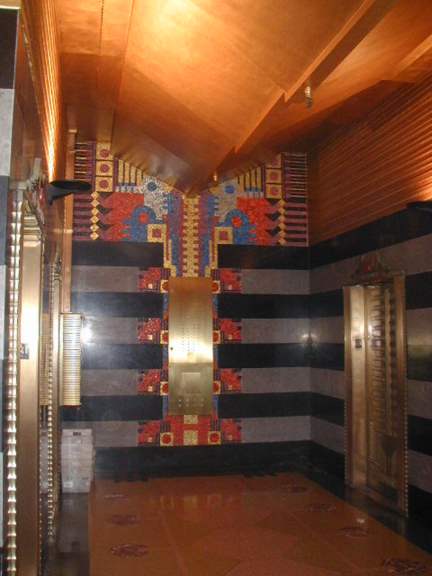 The Film Center Building on 9th Avenue between 44th and 45th was built by Ely Jacques Kahn in 1928 at the very height of the Art Deco movement. Take a look at its spectacular polychromed lobby the next time you are in the area! Across the street is the Film Center Cafe, in glorious 1940s neon. 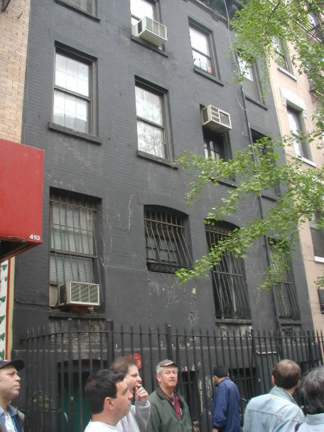 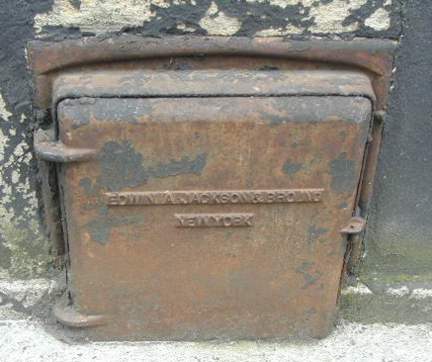 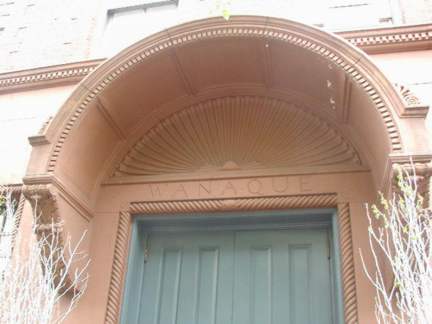 The Wanaque was built in 1887 by the famed architectural firm McKim, Mead and White, who also built the old Penn Station among other grand edifices. It’s possible the original owner was a New Jerseyan; Wanaque is in Passaic County. 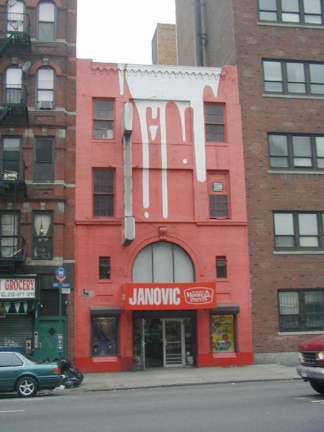 The Werner Building, on 9th just south of 53rd, is a favorite of our tour guide Renee. It’s got a flock of Green Men above the second floor. According to legend, the Green Men on this building, each of whom has a different facial expression, were playfully placed there to salute 9th Avenue el riders as they went past (the el came down in 1940). Was the second floor too low for the el? Photos: Mike Olshan 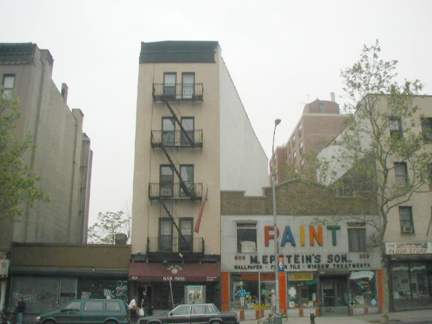 Buildings with slanted walls often indicate odd property lines, long-gone streams or even old roads, like this building on 9th Avenue near 54th Street. (As we’ll see on a future Forgotten page, even the mighty Chrysler Building has a slanted wall to mark the passing of the old Boston Post Road!)

Detail from Church of All Faiths (actually Lutheran) on West 57 Street.Is that old Martin himself? 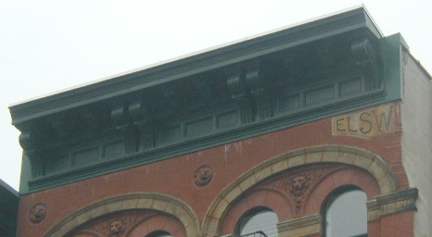 On 10th & 53rd, it’s the Elsw Building, which was once the Elsworth, but got cut in half awhile ago. 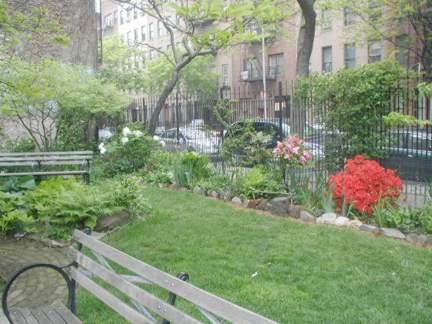 Hell’s Kitchen has its very own community garden on 47th off 10th Avenue. Normally, it’s open only to residents but on some Sundays, the public is allowed in. According to some accounts, during the Draft Riots of 1863, this building’s occupant, one William Jones, was the first man killed. 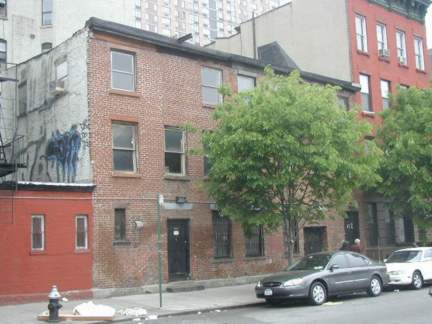 Probably the first building constructed in this location on West 47th Street, it still has the arm used for a hoist rope. With another Forgotton Tour wrapped up it’s time for everyone to reflect on how much fun it is being Forgotten.

Watch for the next Forgottentour!