BICENTENNIAL JOHNNY PUMPS. The remnants of the Spirit of ’76.

So where were you on July 4, 1976? I remember it pretty well. I had stayed up all night just so I’d be awake at 5AM to get ready to go down to Shore Road in Bay Ridge, Brooklyn so I could watch Op Sail. Sailing ships from all over the world were streaming into the Narrows and up the Hudson River in the first of many such spectaculars. I was 19 years old and early in an unrewarding, dissatisfying collegiate career.

It’s likely Op Sail (we had others in 1986 for the Statue of Liberty and 2000 for Y2K) is the easiest-to-remember aspect of the Bicentennial Year in NYC, but on this page we’ll show you others: fire hydrants showing the red, white and blue.

Incidentally, the basic design of the NYC fire hydrant hasn’t changed since the 1910s, except for a more streamlined version in the 1980s, and they can be seen in many old photos.

Who knew that by now, fire hydrants would be our most tangible reminder of the bicentennial? 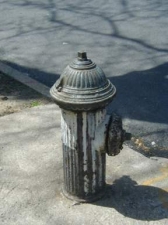 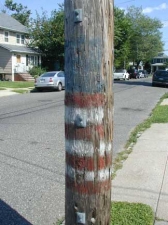 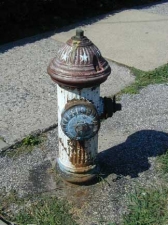 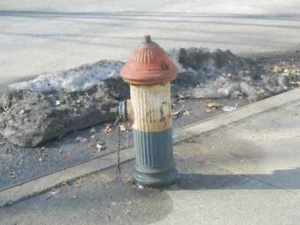 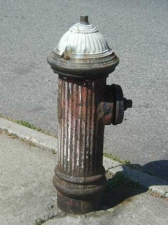 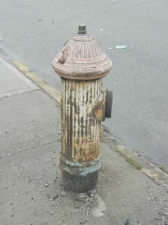 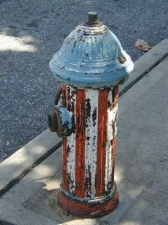 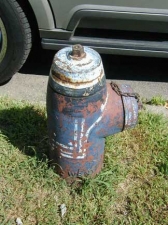 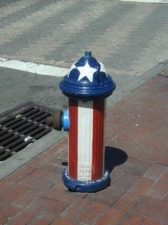 The above hydrant, of course, was painted in the aftermath of 9/11/01. Can you imagine the media overload we would have if we were having a bicentennial now? 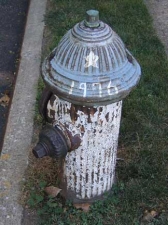 Indubitable evidence of this hydrant’s 1976 pedigree. 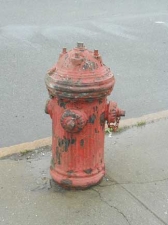 High water pressure “fat” hydrants like these were common in Manhattan, Bronx and Brooklyn streets until the early 1980s when the thinner design took over and most of the “fat” ones were removed. Still, nonstandard hydrants can occasionally be found in Queens and Staten Island. Detailed, fluted hydrants are no longer installed; the streamlined version (see above) is now the standard. 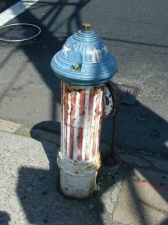 The “fat” hydrants are more properly know as “High Pressure” hydrants, and have been non functional for YEARS (late 50s or early 60s). In the days before high pressure pumps on fire truck, it was possible for the commander at a major fire to call in a request to the “pumping station” to turn on the high pressure hydrants (they were normally OFF) The guys at the pump station would then pressurize the line, and they could hook fire hoses right to the hydrant to fight the fire.

Apparently the city keeps some of them in place for ‘revenue’ purposes!

Hydrants, like the newer octagonal-shaped NYC lampposts, are all “dated”. Dates of installation are near the base of each.