Insurance attorney Lawrence Rogak of Oceanside, Long Island, has been collecting old signs and NYC arcana for many years. Recently, he invited your webmaster to his law office for a tour of the collection. 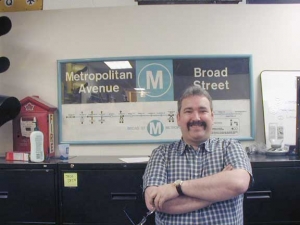 MTA roll signs are mounted throughout the office. They are from the 1967-1978 period when color coding was first used in the subways, with a completely different color scheme was used from today. Originally, the M, running from Kings Highway to Metropolitan Avenue, was powder blue, a color not used today that may be snapped up if the MTA eventually builds a Second Avenue Subway. 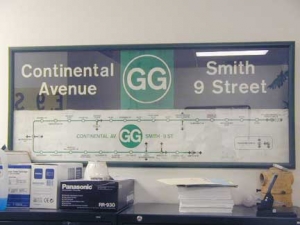 The double-G ran the same route as today’s G line from Smith and 9th Street to Continental Avenue. The IND Crosstown Line was built in stages in the early- to mid-1930s in part to compete with the Myrtle Avenue El, which it gradually drove out of business (though the el became a part of the transit system in 1940 with unification). The el shut down in October 1969. As a rule, double-letter lines ran local while single-lettered lines ran express, but as with anything in the then-TA, nothing was a hard and fast rule. After 1978, the color changed from dark forest green to chartreuse. 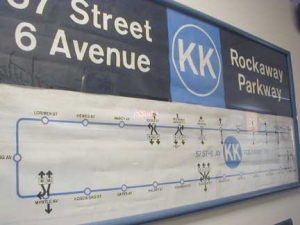 The KK was a hybrid linethat ran on IND tracks in Manhattan and BMT tracks from two separate lines in Brooklyn. Originating in Manhattan at the 57th Street station, which was built in 1967 as a terminus, it followed the Sixth Avenue Line but used a specially-constructed cutoff that enabled the IND Sixth Avenue to connect with the BMT Nassau Street Line between the Broadway-Lafayette (IND) and Essex Street (BMT) stations. The KK then followed the el tracks over Broadway in Brooklyn until reaching the complicated interchange in East New York, where another switch was made to the BMT Canarsie Line. The last stop was Rockaway Parkway. For many years, until 1973, the line passed a grade crossing at East 105th Street.

The KK was not a success and since its demise in the early 1970s, no regular service has run over the IND/BMT Manhattan interchange. For a time, K was used to replace AA as the local on the IND 8th Avenue line, but it was absorbed into the C, and presently, K is unemployed. 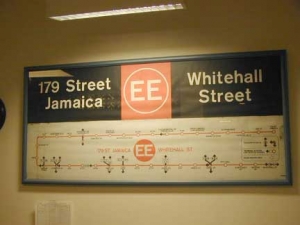 The double-E was another local hybrid. It ran on the BMT Broadway local tracks, switching to the IND tracks in Queens, running along Queens Boulevard, buddying up at that point with its brother, the express E. Today, the R serves the same stations until reaching Continental Avenue, where a transfer to the F brings you to 179th Street.

1980s-era Canal Street sign. These signs originally appeared in white enamel with black lettering in the 1960s, when renovations were done on the Broadway BMT line. In the 1980s, MTA signage switched to white on black. These signs were replaced in 2000, when the Broadway BMT/IND Canal Street station received a top-to-bottom renovation. This station remains the only one in the system where official station signage appears in two languages, with “Canal Street” transliterated, more or less, into Cantonese.

Today’s bus stop signs are multicolored, complicated affairs, with routes and schedules posted on each pole, but until the mid-1960s, heavy iron signs were embedded in concrete bases and placed along each route. 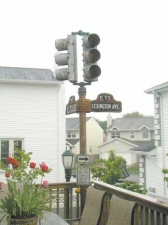 Since his law office, while sizable, is much too small to contain the entire collection, Rogak keeps dozens of items at his home. Here, on the porch, we see a configuration never seen in NYC: Marbelite 1920s-style street frames and signs attached to a 1960s-type stoplight post. Marbelite, then as now, makes traffic signals and control devices. 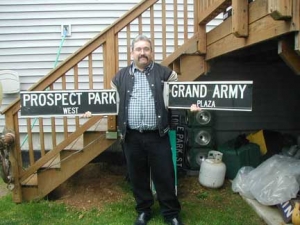 Displaying 1960s-style Brooklyn street signs. From 1964 to about 1984, borough street signs were color-coded until a federal requirement turned them all green. 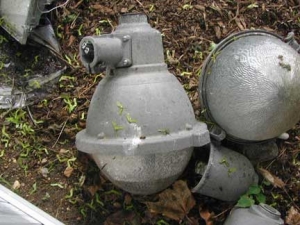 A selection of Westinghouse ‘cuplights’ or ‘acorn lights’ that were common in NYC streets from about 1945 to 1965. Eminently adaptable, they could be mounted on ‘bishop crooks’, ‘Corvingtons’ or the new octagonal poles which debuted in 1950. A few cuplights even made it to Deskey-type poles before they were retired from active service. They are also used extensively in Nassau County and can still be found relatively frequently in NYC on expressway underpasses. 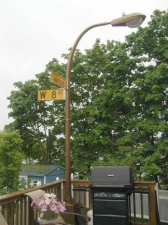 Cobra-shafted lamp typically used on expressway overpasses in the 1960s; the usual luminaire was a GE wedge or scoop with an open mercury-light bulb. Mounted on it is a yellow/black Manhattan street sign in use between 1964 and about 1984. 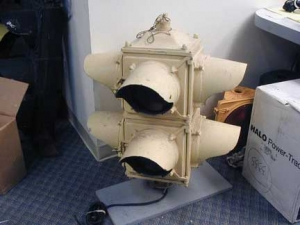 The city used decorative Marbleite traffic signals from the early 1930s until the mid-1980s. Typically, the two-light posts would be mounted on fluted iron shafts painted olive green on cater-coners on intersections, with one post bearing the control box. By the mid-1980s, traffic had increased enough that large guy-wired signals that stretch over the street largely replaced them. 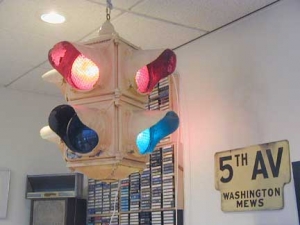 Though Marbleite signals could also come in three-light signals to allow an amber traffic signal, most signals made do with showing red and green simultaneously for a few seconds as a caution signal. On the wall can be seen a street sign peculiar to Manhattan from the 30s to the 60s: large yellow and black signs with an area for the cross street. They were largely displaced by vinyl/aluminum signs that continued the same color scheme.

MEETING ACROSS THE RIVER: HOBOKEN, NJ