LUDDISM isn’t Forgotten-NY’s thing. We don’t indulge in nostalgia because, when it comes down to it, the past ain’t what it’s cracked up to be, in many ways. No air conditioning, no vaccines, women covering up down to their ankles at the beach. No, we don’t want to return to those days. But wouldn’t it be cool if they could once again make subway cars look like the ones we’re showing on this page? With AC, of course.

You’ll be seeing them during 2004 as the MTA rolls them out, as well as other cars from its unfortunately small archive from decades past for its centennial celebration.

In February 2004, the Electric Railroaders’ Association, in league with the March of Dimes, rolled out some of the finest subway cars ever made for a jaunt through the transit system in a trainset consisting of R1’s, R4’s and R7’s, built in the 1930s but still capable of working up quite a head of steam. Needless to say the watchful lens of Forgotten NY was there. The day featured a major surprise… R1 car #100, once again in service! For the run on the Franklin Shuttle, our consist was actually put into passenger service for the first time since the units’ retirement in the 1960s and 1970s. The trainset made three round trips, and accepted regular passengers as well as our tour complement. Needless to say, there was some confusion and while some MTA “customers” loved the old cars, we heard some complaints too! No pleasing everyone.

The R, or Revenue, series of subway cars began service in 1932 when R1 units, Number 100-399, first rolled in the new IND (Independent Subway) 8th Avenue line. Within a year, the R cars would be leased to the BMT (IRT cars are a different width). The cars featured wicker seats, overhead fans, porcelain-covered straps and poles, and more spacious seating than their predecessors, the IRT Low-V (“low voltage”) and BMT Triplex cars. 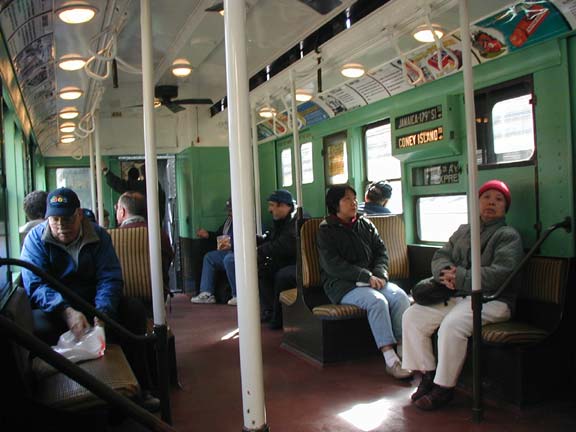 Cars 401 and 484 from the R4 series were also on the trip. These cars first made their appearance in the early 30s. Originally equipped with bare bulbs for lighting the interior (that featured left-hand screws so they could not be used for home lighting, discouraging thieves) the R4s were essentially the same as the R1s. In the 1940s, the bare bulbs were replaced by “bullseye” lighting, so-called because of the fluted glass diffusers. In the 50s, wicker seats gave way to red cushion seating that did nothing to discourage vandals, bringing on the era of plastic benching. (Above: car #484) Car #401 interior. The car has been overhauled since the 1930s, but its porcelain straps and bare bulbs remain. It has been given a new floor and the red cushion seats were added in the 1950s. The interior is now gray-blue, but was likely green when it came from the factory. 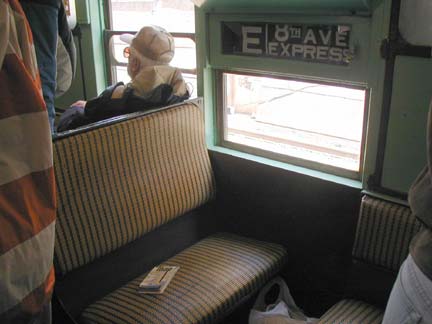 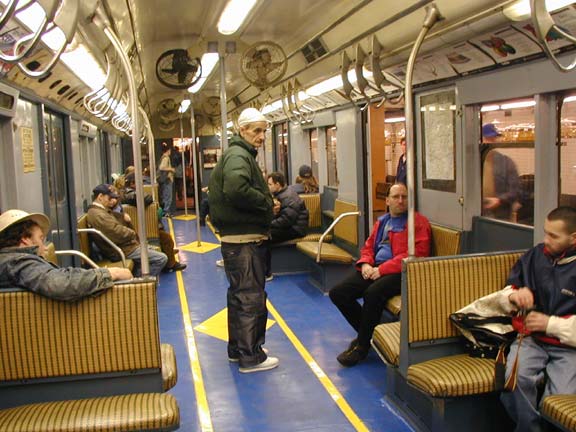 It looks newer than it is. The R7A series debuted in 1938 and resembled its R1 and R4 brothers originally. This car, #1575, was involved in an accident in 1946 and was refitted to look like the then-new R10 series, and re-entered service in 1947. Already, we can see the elements of modern subway cars beginning to manifest: porcelain has been replaced by stainless steel, and the wicker seats in the R10s would feature fluorescent lighting, replacing incandescent. 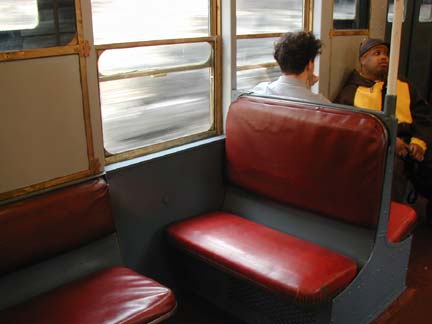 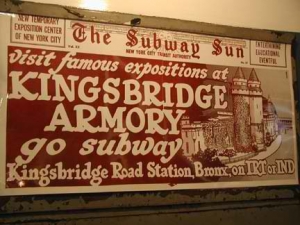 In the 1940s and 1950s, cartoonist Amelia Opdyke Jones created a series of informational…and sometimes preachy… public service ads for the subways. Some were collected in the vintage IND cars and were entertaining reading during our frequent lengthy layovers on the trip. Civil Defense was the 1940s version of Homeland Security and was a product of the Federal Civil Defense Act of 1950, after the USSR tested its first nuclear device in 1949. It codified a set of procedures to be undertaken during crises of natural origin or attacks upon the US mainland.

It’s been quite awhile since the Kingsbridge Armory was a tourist attraction. It’s a very handsome structure and perhaps it could again become a draw.

The Armory building in Kingsbridge Heights is located at the corner of Kingsbridge Road and Jerome Avenue [Bronx], occupies four city blocks, and is believed to be the largest armory in the world. The 90-year-old building housed the National Guard’s 258th Field Artillery Unit, but has been largely abandoned since 1996 and is in a terrible state of dilapidation. Since then, local representatives have been seeking opportunities to redevelop the Armory site for economic development, possibly as a site for schools or a recreation center. In January 2000, then-Mayor Rudolph Giuliani announced plans to transform the Kingsbridge Armory into a 475,000-square-foot urban entertainment center and sports complex. Under the aegis of the Economic Development Corporation, the city has set aside $30 million to refurbish the building and construct a new roof and intends to turn the armory over to private developer RD Management by early 2003 so that it can be developed into an entertainment complex. However, several zoning and building permits are still needed, and community groups are continuing to fight to get much-needed schools included in the complex. 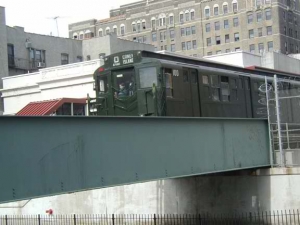 R1 Car No. 100, left and R4 Car #401 during their runs on the Franklin Shuttle. The overpass is over Park Place. In the photo left, the old Jewish (Interfaith) Hospital building is in the background. These cars were temporarily in actual revenue service this day!

nycsubway.org on the Franklin shuttle 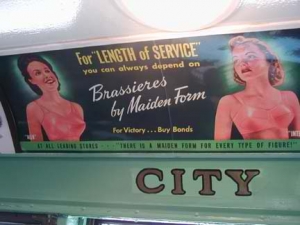 They were secretaries, they wore pearls and all they wanted to do was find a husband and have kids in suburbia…or become a singer or dancer on Broadway. For years, the fairest flowers of the fleet competed in the Miss Subways contest. In 1949, Vera-Ellen played Miss Subways (Miss Turnstiles in the movie) in Leonard Bernstein, Stanley Donen, Jerome Robbins and Gene Kelly’s On The Town. Miss Subways’ prize? A silver charm bracelet. In 1976, the combination of feminism and graffiti chased Miss Subways away forever. During your webmaster’s time at NYC’s biggest print shop, Photo-Lettering, I worked with Robin, a former Miss Subways, but she never showed me her charm bracelet.

Not a few Miss Subways favored Maidenform, not that you could tell from the posters. Somewhere along the way, Maiden Form became one word. 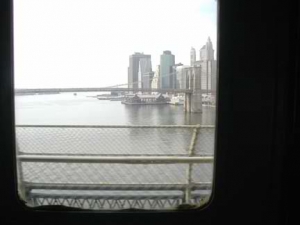 The great wonders of the world are visible from the window of a NYC subway car, new or old. You want to live somewhere else do ya? 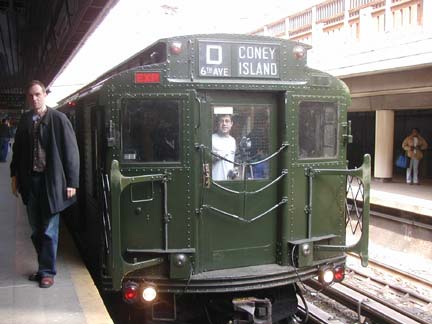 Public reaction was priceless when our trainset rolled past Church Avenue 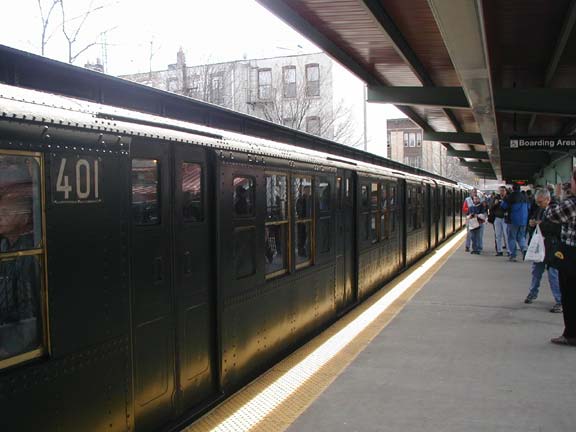 The scene on the Park Place platform…

In the late 50s it was beginning to dawn on cigarette manufacturers that it might be a good idea to filter out the amount of soot and dust that accumulates on your lungs when you smoke. Earlier ads actually touted some brands of cigarettes as actually being beneficial to health. Things turned around when the Surgeon General’s report on smoking came out in 1964 and eventually, cigarette ads were banned on TV, radio and on subway posters. 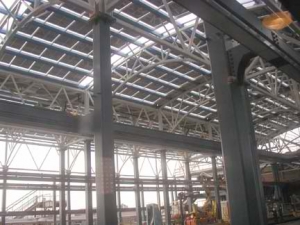 When they’re done reconstructing the Stillwell Avenue station, it will be the terminal for the B (Brighton) D (West End) , N (Sea Beach) and F (Culver) subway lines. These subway lines evolved from surface railroad lines once served by steam engines and rattletrap passenger cars on their way to then-bucolic Coney Island; the Sea Beach line takes its name from a long-defunct hotel that was once the end of the line. When finished, Stillwell Avenue will echo the larger train sheds you see when movie couples have a tearful parting at a grand railroad station with diffused sunlight streaming in from the ceiling. Natural light is the new trend and will also be used in Santiago Calatrava’s new PATH station on Church Street. 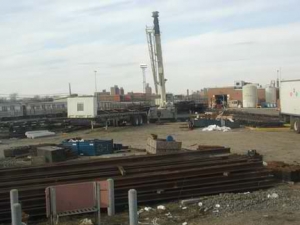 Our trainset rolled on from Stillwell Avenue into the Coney Island Yards, one of the country’s largest railroad yards; it serves as the repository and repair shop for most of NYC’s active subway cars, as well as most of its Transit Museum subway cars going back to cars built in the 1920s.

As our trainset rolled past, we saw cars such as these R27s or R30s…can’t see the train ID numbers from here.

nycsubway.org has a comprehensive overview of the Coney Island complex, including hundreds of photographs.

It’s a short connection to the Culver line along McDonald Ave. from CIY. Our train switched to the 8th Ave. line at Jay Street and rolled on into Manhattan… The Williamsburgh Savings Bank building floats behind a formerly illuminated Kentile Floors linoleum sign. If Bruce Ratner’s proposed complex for the New Jersey Nets becomes a reality, the “Willie” will be dwarfed by it. This was taken from the subway’s highest point, the viaduct over the Gowanus Canal. This map was produced when the Independent Subway…the IND…was in fact an independent entity, run by NYC. Note that the then-separately owned BMT and IRT subways are not pictured. In 1940, the subways were combined under control of NYC, and maps produced after that pictured the entire system.

Note that the Fulton Street line (today’s A and C) only reached as far east as Rockaway Avenue at this time. To go further you debarked and boarded the Fulton Street El with a free transfer. At length, the el would be demolished in Brooklyn, and a connection would be built at the Brooklyn-Queens line. In the south, the IND terminated at Church Avenue. In 1956, it would be connected to the Culver elevated (where our trainset was at this time). 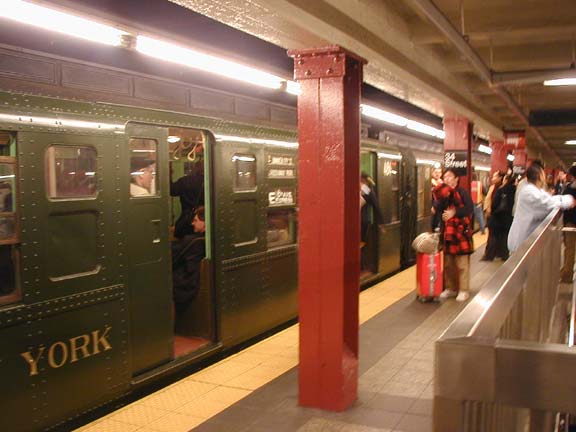 It was late. The tour was on its way to Inwood, but I alit at 34th Street, where innocent MTA “customers” were shocked out of their shoes at such a stylish beast chuffing into the station.