MORE OF THE REAL SUBWAY

In proposing a ban on all photography by “unauthorized” personnel on its property, the MTA is citing safety precautions in the Age of Terror.

However, I’ve long suspected the real reason is that the MTA wants to protect its properties. There’s money to be made as the MTA markets images of its collection of now-100-year-old mosaics, tilework, station houses and other historic architecture…but the profits are diluted when your webmaster, or outfits likenycsubway.org or nycrail.com put it all out there for you for free!

There’s possibly another reason, however. Though the MTA has made great strides in station renovation and graffiti removal in the last 15 years, work remains to be done and there are vast swaths of the system where, apparently, no MTA nabob or NYC elected official have ever ventured…just the working people who use these stations, which are shamefully deteriorating into dangerous, possibly even unsanitary, conditions. I’m not saying the two stations on this page are dangerous. I am saying they’re butt-ugly, and they’re in parts of town that NYC is actually touting for imminent development. If out-of-towners see the shape these stations are in, they might think twice about moving to Hunters Point or Park Slope. The MTA would rather you not see these stations. 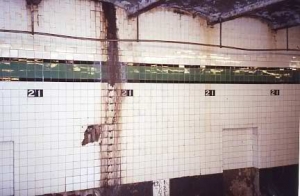 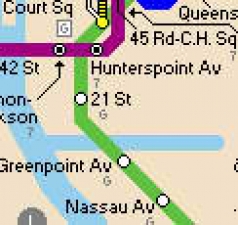 This station, on the IND Crosstown Line, features the G line, which never sees Manhattan. It was opened in 1933. To add injury to insult, the MTA has announced plans to cut back the G to the Court Square station (on weekends it runs to Continental Avenue in Forest Hills, and it used to run there weekdays). Already, because of an unfortunate switch track location, it must discharge passengers at Smith/9th Street, one stop before it can transfer to the BMT at Fourth Avenue (see below) 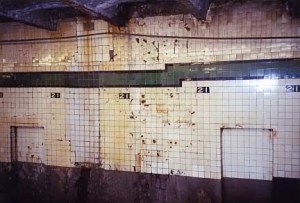 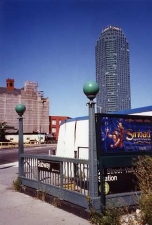 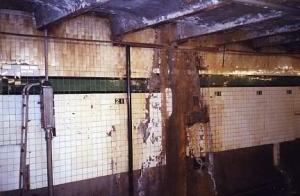 Welcome to the Olympics, World!

The Queens West development is proposed as the NYC Olympic Village in 2012, essentially the housing project where athletes from around the world will be living for the two weeks the Games would be played in NYC. The major nearby subway stations are Vernon-Jackson on the IRT Flushing Line (which wouldn’t win a beauty contest but looks like Catherine Zeta-Jones next to this station).

21st-Van Alst is presently suffering from extensive leaks, possibly from underground streams, resulting in rusty deposits on the station sidewalls. It doesn’t seem like it would take a lot to discover the source of these leaks and plug them up. The station’s green tiles have also been haphazardly replaced, with wrong sizes, colors, etc.

With the International Olympic Committee to award the Olympics to a host city in July 2005…well, I hope NYC2012* doesn’t show them this particular subway station.

*The bid depends on Jets Stadium being built on the west side. That ain’t happening. [2005: Bid denied] 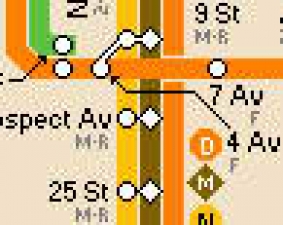 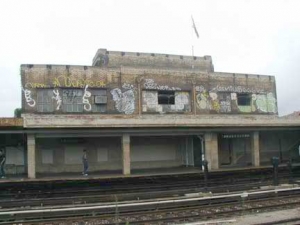 We’ve covered the IND Crosstown 4th Avenue station before, but in this context, discussing its shabby condition is even more appropriate. It is one of the IND’s two open-air stations and is located on a potentially-magnificent trestle over 4th Avenue in Park Slope; yet, the MTA treats it like a sixth toe.

Besides its aesthetic sins, it features an interminable climb of 3 flights of stairs to/from its transfer with the BMT 4th Avenue subway, without an elevator or escalator. 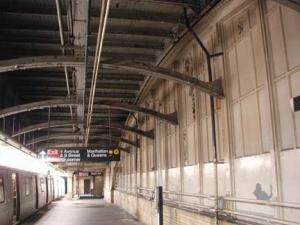 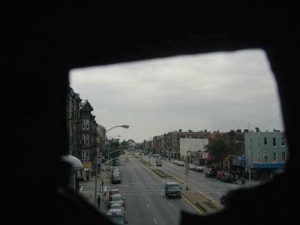 The station was built over 4th Avenue with picture windows on each side looking north and south along the avenue. Vandalism forced the painting-over of the windows (making them apparently less tempting to hooligans). We’d recommend replacing the glass with tough mylar (which has already been done on several MTA elevated stations). That solution is unlikely, since large billboards have been in place in front of the windows for decades which make the MTA a pretty penny, we’d imagine. RIGHT: A broken window occasionally vouchsafes a potential view. 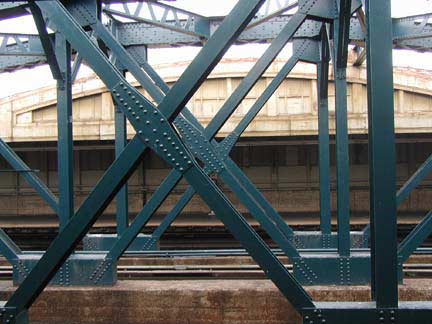 I’ll grant that the MTA has given the metal trestles along the elevated section on the crosstown a new paint job of late…after a couple of decades.

The station needs a complete reno if the yuppies of Park Slope, migrating west from their former boundary line of 6th Avenue, or the yuppies of Cobble Hill, migrating east across the fragrant Gowanus, are going to make the 4th Avenue station environs a happy brie and coffee table hunting ground.

[2012: 4th Avenue is finally being renovated and, hopefully, the window panes will be clear] 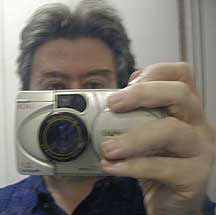 Your webmaster photographed these images in August 2004 and completed this page in September 2004.

BYE BYE REDBIRD. The demise of the railfan favorites