HUBRIS. We all have it now and then.You get on a little roll, and you think you can keep it going forever, that little winning streak you’re on. Sooner or later though, you come crashing to earth: not enough wax on the wings, and the sun melted what was there.

There were a lot of banks in NYC history that thought they’d be around forever, too, and some never made it past a few years.

Forgotten Fan Gary Fonville, a former MTA bus driver, has been shooting up banks in his spare time, ’cause that’s where the money is. Herewith, we present some banks that have been yanked. 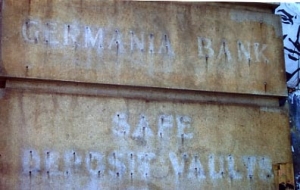 As we’ve seen on my BACK TO THE BOWERY page, the building has become a mecca for street artists and is now the base of NYC photographer Jay Maisel.

Building that housed the Germania Bank. Location: NW corner of Spring Street & Bowery. Germania merged with Manufacturers Trust Co. in 1927, which by 2004 had evolved to the JP Morgan Chase Bank. 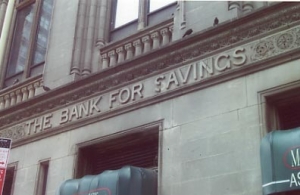 According to sign maven Walter Grutchfield, The Bank for Savings was chartered in New York State from 1819 to 1982 when they merged with the Buffalo Savings Bank and the name was changed to Goldome Bank for Savings. This was the bank’s flagship building in NYC and was built in 1892. Its night depository box is still there. 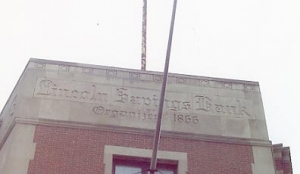 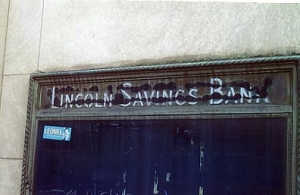 There are a good number of Lincoln Savings Bank buildings around. This one is at Broadway near Union Avenue, Brooklyn, and its real find is a recently uncovered stained glass-titled signboard. As it says on the sign, it was chartered in 1866, but as the German Savings Bank of Brooklyn. The Lincoln name came to be associated with the bank in 1917; it became Lincoln Federal Savings Bank in 1983. 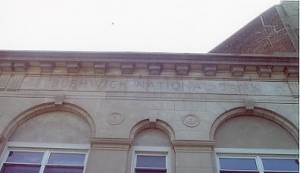 Bushwick National Bank, Broadway & Halsey Street, Brooklyn. Now used as the sanctuary of Daniel Temple Church. The bank was established in 1923, merged with the State Globe Exchange Bank in 1927 and was out of business by 1931. 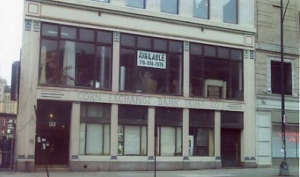 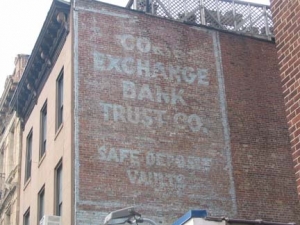 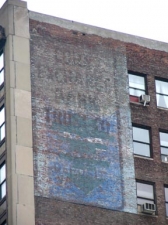 Corn Exchange Bank Trust Co., Flatbush Avenue and Livingston Street, Brooklyn. You still see numerous CEBT ads around town, on 8th Avenue in Manhattan (above) and Flatbush Avenue in Brooklyn (below). The bank was founded in 1852 and opened its doors for business in 1853. the Corn Exchange was an aggressive retail bank that acquired many smaller community banks. In 1929 it became the Corn Exchange Bank and Trust Company and in 1954 it merged with Chemical Bank to become the Chemical Corn Exchange Bank. Chemical Corn’s merger with The New York Trust Company in 1959 was the last of the “Corn”. The name was then changed to Chemical Bank New York Trust Company. Many mergers and acquisitions followed and in 1996 Chemical merged with the Chase Manhattan Corporation forming what was then the largest bank holding company in the US. Chase thrives today as part of JPMorgan Chase. 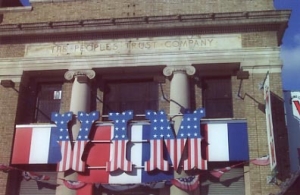 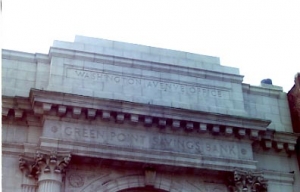 Green Point Savings Bank, Washington Avenue and Lincoln Place, Crown Heights. The bank was instituted in 1868 and changed its name officially to Greenpoint, one word, in 1995. It merged with North Fork in 2005. South Brooklyn Savings Institution, Court St. and Atlantic Avenue, Brooklyn Heights. Founded, as the cornerstone says, in 1850 and after numerous acquisitions and mergers is now part of North Fork. 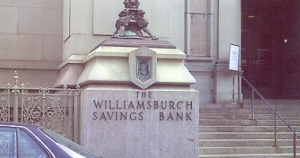 The former Williamsburgh Savings Bank, complete with “h”, built two of Brooklyn’s most noted buildings: the downtown Williamsburgh Bank tower, now filled with dentists’ offices and soon to be occupied by condos for the rich, and the domed 1875 bank building designed by George Post. The bank was chartered in 1851 and is now part of the JP Morgan Chase universe. The bank building now houses a branch of the giant Hong Kong and Shanghai Banking Corporation (HSBC, which can’t help but cheapen every landmark it foists its incongruous logo on, in your webmaster’s opinion). Kings County Savings Bank at Nostrand Avenue and Eastern Parkway, Brooklyn, now a Banco Popular. KCSB (which has a fantastic Second Empire building in Williamsburg) was founded in 1860, became United Mutual Savings Bank in 1968 and is now part of Ridgewood Savings. 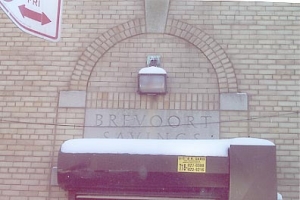 Bowery Savings Bank, Bowery and Grand Street in Soho. One of our older banks, chartered in 1834 and converted to Federal Home Savings of America in 1992. This, a Stanford White creation, was completed in 1895. Bowery Bank had stood in this location since 1834: this was the third building.

A hint of the old Brevoort Savings Bank can be found at Carver Savings Bank on Fulton Street & Nostrand Avenue, Brooklyn. Established 1890 and converted to Crossland Savings in 1985. First National City Bank, Broadway and Canal. The building is now a Citicorp: FNCB was established in 1812 and after a spate of acquistions, became part of the Citicorp empire in 1976. 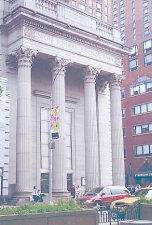 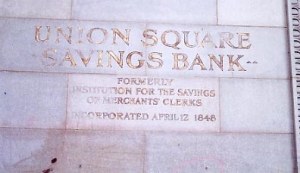 Union Square Savings Bank, instituted, as the sign says, in 1848 as the Institution for the Savings of Merchants’ Clerks. Name changed to USSB in 1905 and after the usual series of mergers, liquidated in 1995. The beautiful Corinthian-columned building is at Union Square West and East 15th Street.

Another impressived columnated building,this one Ionic, is just a block away from USSB at East 16th Street and Union Square West. The former Bank of the Metropolis is now an upscale restaurant. The building dates to 1893 and is the work of Bruce Price, who also designed Times Square’s Knickerbocker Hotel. He was the father of Emily Post, the etiquette specialist.

All photos by Gary Fonville.

I think this site benefits greatly from previous generations’ foolish expectation of permanence.

People didn’t reslly truat bank’s.I would say for good reason. So banks tried too give a feeling of being stable & prosperous by building impresive building’s..