Forgotten Fans pose at the Wavertree, one of the Seaport’s museum ships, built in Southampton, England in 1885.

Despite massive subway problems, the presence of the Breast Cancer Walk and the Indian Festival, Tour 22 in the South Street Seaport area went off without a hitch, albeit just a little late. All proceeds from this tour went to the Red Cross for Hurricane Katrina relief; your webmaster matched the amount himself; and Cathy at Cityrag matched the whole amount and donated that to help homeless animal victims of the floods.

The tour did not follow the usual tourist activity at the Seaport, ie. the ships, Fulton Street and Pier 17 (Forgotten Fans had adequate time to do that after the tour. Instead we explored the long-neglected Belgian-blocked streets north of Fulton, with their 18tha nd 19th Century buildings finally now being converted to expensive apartments. Here is a very small sampling: 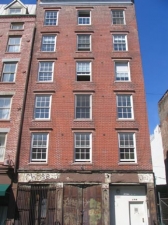 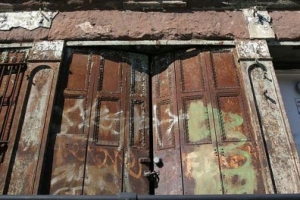 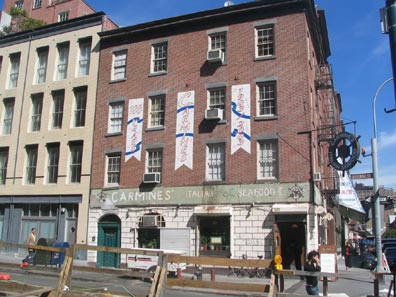 Two institutions in one: 212 Front, at Beekman, dates to 1824, the year Beekman Street itself was cut through. Carmine’s Restaurant, on the first floor, celebrated its 100th anniversary in 2005. 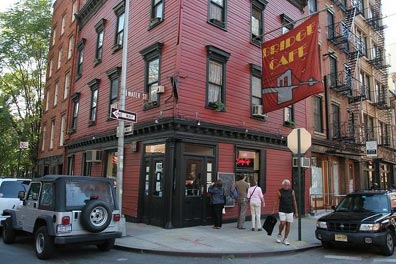 A restaurant with an even lengthier lineage is the Bridge Cafe at 279 Water at Dover Streets. Historian Richard McDermott staes that it has been used as a bar or restaurant (and occasionally a brothel) continuously since 1792, making it NYC’s oldest drinking/eating establishment. It is the only wood-frame building remaining in the seaport area. photo: Steve Garza 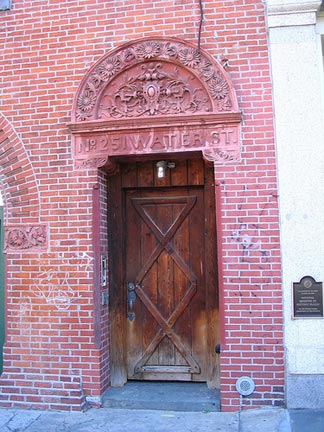 251 Water St., just south of Pike Slip, was built by Carl Eisenach in 1888. A large terra cotta tympanum above the wood door carries the address. 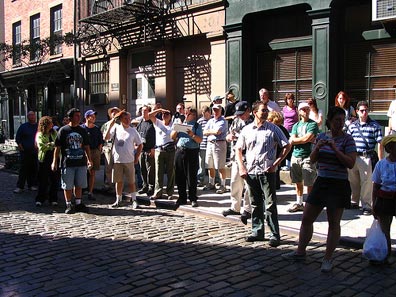 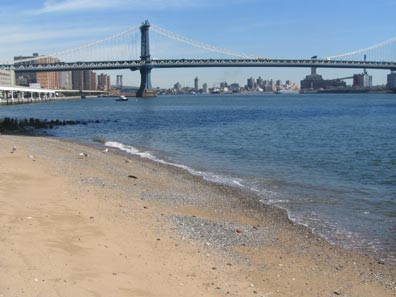 Speedos and bikinis optional. Move over Chicago, we have a downtown beach too, under the Brooklyn Bridge. But seriously, why not develop it as such? (Because East River currents are way too dangerous) 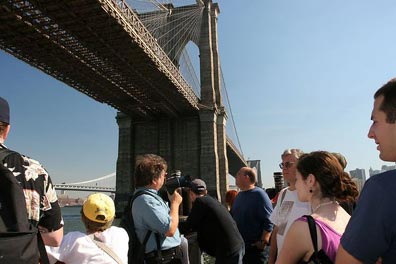 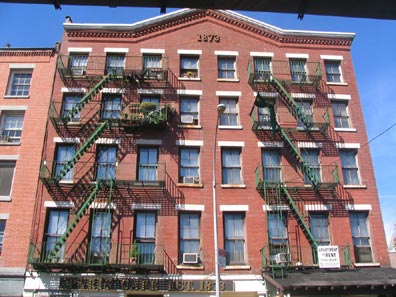 South Street, in October 2005, remained, by court order, the city’s chief seafood distribution center. It also contains some of the area’s most notable architecture, hard to see for the FDR Drive overpass. Above: John B. Snook’s Meyer Hotel, built in 1873 (as the pediment says) by the archiect who built the original Grand central Depot on 42nd Street, the one the present Grand Central Terminal replaced in 1913. It was originally William Onderdonk’s law offices, but purchased by Henry Meyer in 1883. Paris Café, another of NYC’s oldest restaurants, is on the ground floor at South St. and Peck Slip. Thomas Edison was an occasional customer and the Meyer is reputedly the first building in NYC to be illuminated by electric light. 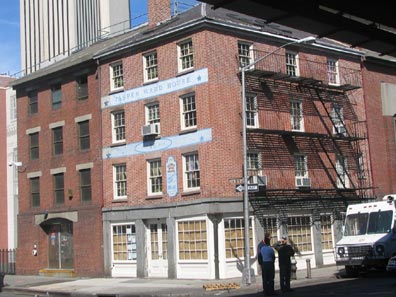 The Jasper Ward store, South on the other side of Peck, was built in 1806; merchant Ward had purchased the land in 1800 when it was still under the East River. Like many other South Street houses the upper floors were used as counting rooms, used for bookkeeping and where account ledgers were shelved. 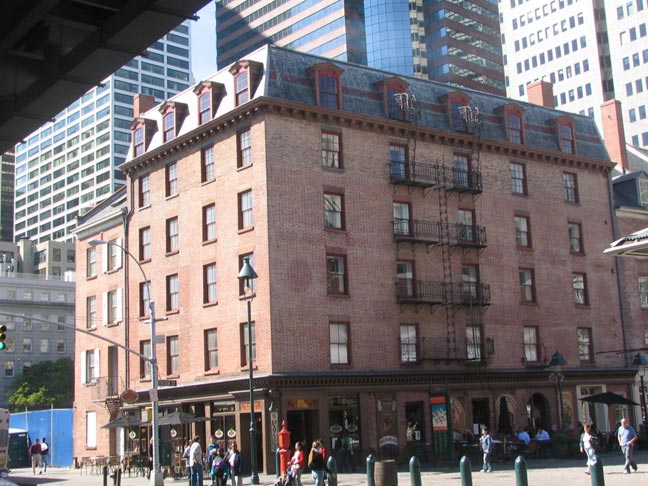 South at Fulton is dominated by Schermerhorn Row, which stretches along Fulton all the way to Front Street. The Schermerhorns were a well-established merchant family in NYC in the colonial era. Peter Schermerhorn owned the land here as early as 1792 and began building the Row in 1810, completing it in 1812. It’s been altered considerably over the years; the mansard roof, for example, was added in 1868. Today various restaurants and commercial establishments as well as the Seaport Museum are located in the Row.

If I had taken this picture in 1992 the storefronts would have boasted two old-time Seaport establishments, Sloppy Louie’s and Sweet’s seafood restaurants. Sweet’s was lost to avicious nor’easter in December 1992 and 6 years later, Joe Merino, nephew of original proprietor Louis Merino, closed sloppy Louie’s. Joseph Mitchell explored the then-mysterious upper floors of the building in 1952; his article published that year in The New Yorker became the subject of a collection of his work, Up in the Old Hotel. 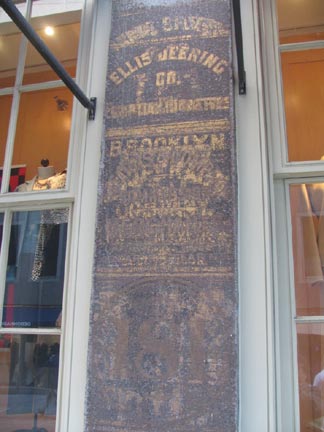 If this sign on Front near Fulton isn’t an original, it’s a very good reproduction: it even has overprinted older ads. 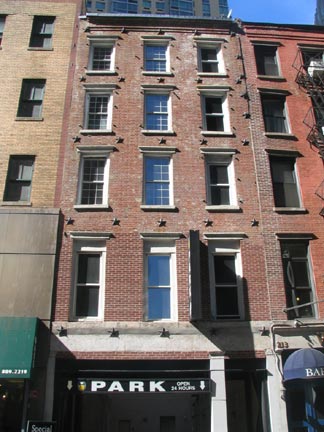 211 Pearl Street was torn down a couple of years ago. It just appears to be there. Cleverly, builders retained the facade, complete with star-shaped end caps of the old iron tie rods, after tearing down the rest of the building to replace it with a parking garage.