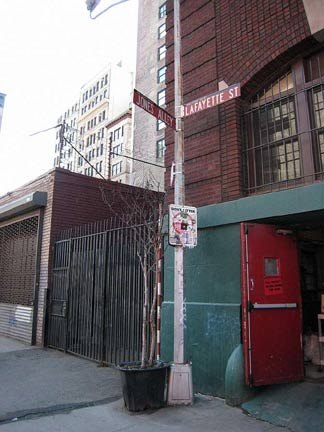 New York is just not an alley town.

That’s the reason your webmaster has attempted to ferret out the hidden laneways and terraces each borough has to offer and rejoices when any particular obscurity surfaces. Soho, the Manhattan region south of Houston Street, conceals one such alley that has actually been divided into two. It curves not once but twice, intersecting four streets along its route…

Our story begins, according to Gil Tauber of oldstreets, in 1806, when a laneway called at first Cross Lane was laid out beginning at Bleecker opposite Mott. It ran north to the middle of the block, then west to a point about 150 feet east of Broadway, then north again, crossing Bond and Great Jones Street to a dead end about 45 feet south of East 4th Street. Lafayette Street (laid out in the first decade of the 20th Century) later cut the alley into two L-shaped sections. 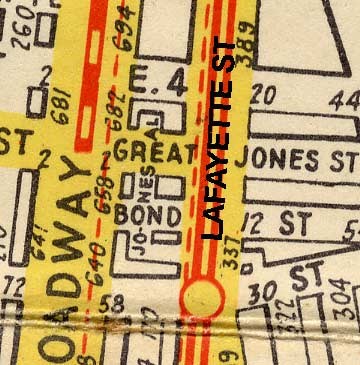 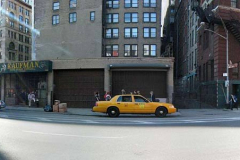 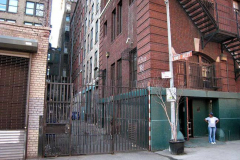 The name “Shinbone Alley” is revered in story and song. It’s possible that early 20th Century Illinois author Don Marquis used Shinbone Alley as the setting for his Archy + Mehitabel stories, about a talking cockroach, Archy, and Mehitabel, an alley cat.

Due to a tragic mishap of destiny, Archy, once a great poet, was reincarnated as a roach, but maintained the poet’s soul, which he poured out in verse each night by hopping from key to key on Mr. Don Marquis’ rusty old typewriter. Archy told stories about Mehitabel the cat, Freddy the Rat, and other denizens of the garage he lived in. Since he couldn’t manage the shift key, his verse was relatively unadorned by punctuation. Archy + Mehitabel became a Broadway play (“Shinbone Alley”) and ultimately, Shinbone Alley became ananimated feature in 1971 with the voices of Carol Channing and Eddie Bracken. Shinbone Alley has also been remembered in song titles by artists as diverse as the Spin Doctors and Bob Wills & His Texas Playboys.

Left: Shinbone Alley gate, Lafayette Street; a look at Shinbone Alley through the gate. The alley takes an abrupt right turn and ends at Bleecker opposite Mott.

A look at Shinbone Alley from Bleecker, as well as a peek at its oft-stolen street sign, can be seen on FNY’s Alleys of Soho & Noho.

In the dim past, according to Tauber, the name Shinbone Alley has also been applied to Washington Mews, from 5th Avenue to University Place north of Washington Square (odd, since that alley is straight with no bends, as well as Doyers Street, the “bloody angle” of Chinatown, that curves between Pell Street and the Bowery.

Directly opposite Lafayette Street from Shinbone Alley is the old continuation of Cross Lane, now known as Jones Alley. Its only extant street sign can be found here. No one is sure exactly when but Cross Lane was renamed in honor of Samuel Jones, a prominent lawyer popularly known as the “Father Of The New York Bar” in the late 1700s. Jones also served as New York City’s first comptroller.

Jones originally owned the land on which Great Jones Street runs. When he deeded the land to the city he demanded the city named any street opened through the grant for him, as part of the agreement. Because the city already had a Jones Street to the west in Greenwich Village, it was decided to call it Great Jones Street because it was wider (In the 1800s, “great” also meant “large”, a meaning that the word no longer has.) Jones Alley, also in Samuel Jones’ old property, was also named for him. 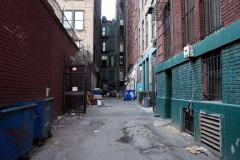 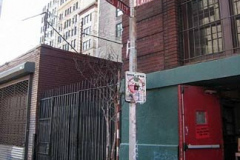 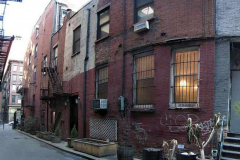 Well into the 1990s the lamppost that illuminated the corner of Lafayette and Jones Alley carried a Westinghouse AK-10 “cuplight” (as seen on this page). Note the unusual positioning of the post next to the building. The Department of Transportation occasionally does this in areas where deliveries take place to lessen the possibilities of truck-lamppost accidents. What’s behind the gate?

If we follow Jones Alley forward, it turns right and runs north. We cross Bond Street (where more Belgian blocks are in evidence) and standing in the center of the alley between Bond and Great Jones, we see…

West side of Jones Alley. Great Jones Street is at left, and Bond at right.

East side of Jones Alley. Bond Street is at left, and Great Jones at right.

The slang term “jones,” meaning an addiction to drugs, is said to have originated among addicts who lived in Jones Alley.