As little as a dozen years ago [as of 2007] you’d never have thought that Brooklyn would become a rock music mecca. In just the past few years though, Venues like Warsaw, Pete’s Candy Store, Union Pool, Galapagos, Asterisk Art Project, The Lucky Cat, free103point9, Tommy’s Tavern, Uncle Paulie’s, the Glasslands, the Woodser, and the McCarren Park Pool have made Williamsburg and Greenpoint a world-class rock mecca.

In the 50s and 60s, Brooklyn’s Fox and Paramount Theatres were the rock meccas as rival DJs/promoters Alan Freed and Murray the K put on pop extravaganzas featuring the likes of Frankie Avalon, Bo Diddley, Chuck Berry, Jerry Lee Lewis and Frankie Lymon, on through “Little” Stevie Wonder, The Shirelles and Ben E King.

The Beatles ushered in the rock stadium era with their 1965-66 shows at Flushing’s Shea Stadium, and the bigger acts shifted their attention away from the concert halls, at least for a time, though Bill Graham could always fill the Fillmore East and West. Between 1970 and 1973, one Brooklyn rock venue held firm: The 46th Street Rock Palace. Designed by John Eberson as the Universal, a 2500+ seat movie hall in 1927, it was later acquired by the Loew’s Organization and changed its name to Loew’s 46th Street Theater. It was located at Alben Square, where 11th and New Utrecht Avenues and 46th Street form a triangle, in Borough Park, Brooklyn. 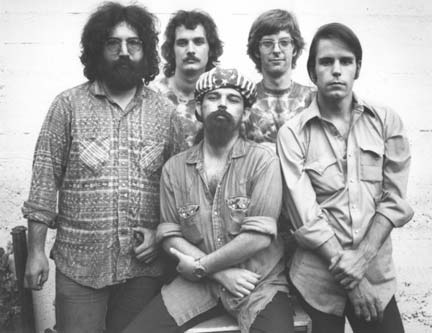 The 46th Street Rock Palace hosted some of the biggest names in the rock pantheon in the early 1970s: The Byrds, Iron Butterfly, Country Joe McDonald, The Youngbloods and the Jefferson Airplane all played there.

Deadheads were known for obsessively taping the shows, with the tacit permission of the band, and so most of the live concerts have turned up streaming online; these shows were no exception.

This was possibly one of the weirdest shows I ever saw (but enjoyable nevertheless). It took place on a Weds about 2:30 [PM] ..the theater was basically deserted. We sat in the third row…we were literally half of the audience until a few songs in when a whole group of senior citizens (at least 20) filed in and sat a few rows behind us (not your usual dead crowd!). The 10+ of us noticed them, but didn’t know what to make of their presence, so we just carried on as usual (if you know what I mean). Bur for years I wondered what drew them to see the Dead? A few years ago, still wondering, I told this story to a Deadhead who grew up in Brooklyn and he knew the answer. They were from a local senior citizen home and they were on an outing. They had no idea what they were walking into, but the theater had a package deal with the home to get them out and about, and that must have been one of the days they were scheduled to go to that theater to see a movie. They didn’t come to see the Dead, (but I wonder what they made of them). By the way, the show was pretty good. It must have been because the old folks stayed for the whole thing (or else, weird as it must have been to them, it was better than going back to the home).

Think about it–it was a different planet then. The Dead played a Wednesday afternoon show at 2:30 PM!

The hall, renamed Banana Fish Garden for the rock concerts put on by a local promoter, was also used for a few tapings of the ABC Don Kirshner’s Rock Concert show. I can recall seeing Jerry Lee Lewis there, putting a pair of panties tossed at him by one of his fans on his face and inhaling deeply (needless to say, it did not make the air cut of the concert). Also saw Hot Tuna there, their show delayed for some time while they haggled with ABC to leave a faux marijuana plant on the stage (it got the axe). Oddly enough, members of Hot Tuna came by to jam with the Dead one of the four nights in Brooklyn…it was quite a good night too.John Lightning, archive.org

During the early 1970s the theatre was pressured to ease out rock by the predominately Orthodox and Hasidic Jews who inhabit Borough Park, although 2:30 PM weekday shows would probably eventually tax anyone who lived in the immediate vicinity. Eventually the theatre closed, and has been home to a succession of furniture stores since then. 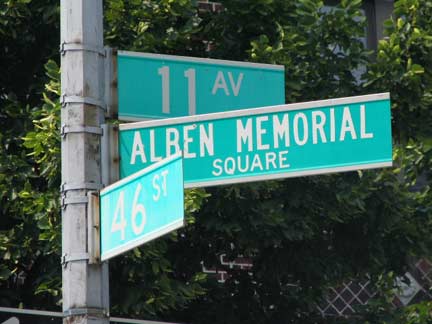 Alben Triangle (as it says on the Parks sign, but not the street sign) is named for Bud Alben, a Brooklyn resident killed in World War I. A flagpole with a memorial plaque at the base was presented by the Bud Alben Post of the Veterans of Foreign Wars in 1935 to honor Borough Park soldiers who died in World War I.

This land was acquired by the City of New York in 1918, and jurisdiction was assumed by the borough president on the same day. From the beginning, the land was to be used as a public place; Parks gained jurisdiction in 1923, and the property was named Alben Memorial Square by the Board of Aldermen the same day. The triangle shortly fell into disrepair, until the Bud Alben Post of the Veterans of Foreign Wars presented a flagpole with a memorial plaque on the base of the pole and the park reopened in 1935 to the public. The name was shortened to Alben Square in 1987 by Commissioner Stern, and then later changed to the more geometrically appropriate Alben Triangle. NYC Parks

I was unaware of it but this section of northern Borough Park has also become a Polish enclave.

Harnas is the brand name and Gorskie is a city/town somewhere in the south of Poland. –ForgottenFan Liza Drake

Crimean Mosque, next door to the old Loew’s 46th Street. Crimea is a peninsula on the southern edge of the Ukrainian republic that juts into the Black Sea. It is, perhaps, most famous for the 1853-56 Crimean War in which Russia fought an alliance of western European powers and the Ottoman Empire over claims to the Holy Lands.

Borough Park, like much of Brooklyn, is quite diverse!

Inside the Loew’s 46th