One of the IRT’s “original 28” stations constructed in 1904,Columbus Circle, has been a hodgepodge in appearance since the 1930s, when a transfer to the new IND running up Central Park West was instituted.

For example, all the “Columbus Circle” terra cotta plaques ( seen above) were removed during the 1930s renovation. In addition, more than half the station was dealt rather anonymous, functional tile work with just the facts ma’am station identification in the 1950s. In the 1990s and early 2000s, Columbus Circle’s sister stations at 50th Street and 66th Street-Lincoln Center were given star-treatment renovations, but Columbus Circle, a complicated platform built on a curve, was left off the list. Just this year the MTA finally began renovations, after the 2005 opening of the new Time Warner Center, and knocked down a lot of ancient tilework, revealing what lay beneath…

Supporting columns and brickwork have been exposed.

[The Columbus Circle station is the only one] that features Grueby Faience plaques placed on corners. The plaque depicts “the great navigator’s caravel” according to The New York Subway: Its Construction and Equipment, the book published by the IRT in 1904 when the subways opened. It is likely not the Santa Maria, which was larger than a caravel and had a topsail.

The real find, of course, was the exposure of a curious plaque with Art Nouveau, Aubrey Beardsley-esque lettering and ornamentation: 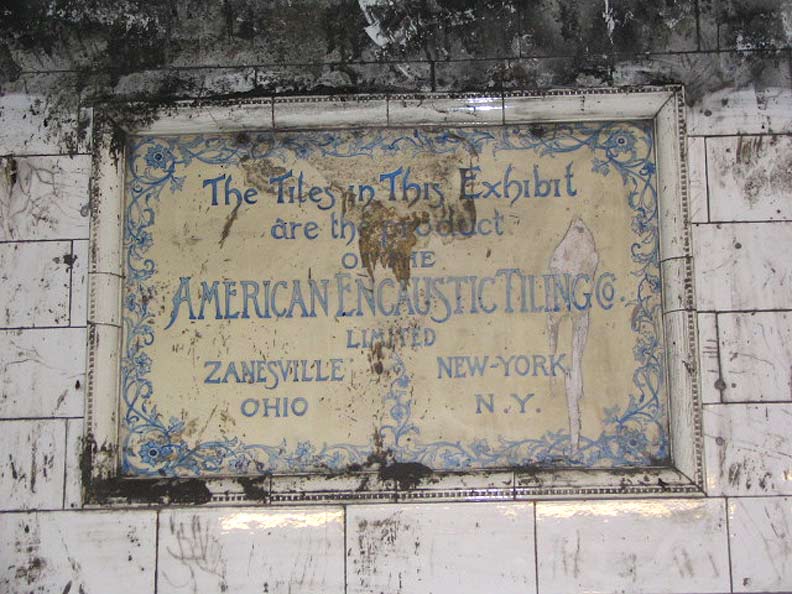 The use of the word “exhibit” seems to imply that a number of station treatments were originally considered before the Grueby-Faience samples were selected.

American Encaustic Tiling Company was founded in Zanesville, Ohio, in 1875. The company planned to make a variety of tiles to compete with the English tiles that were selling in the United States for use in fireplaces and other architectural designs. The first glazed tiles were made in 1880, embossed tiles in 1881, faience tiles in the 1920s. The firm closed in 1935 and reopened in 1937 as the Shawnee Pottery. Kovels

The decorative work at Columbus Circle is interesting for its variety. Apparently it was one of the first stations ready for ceramic installations, so the Grueby Faience Company used it as a place to test different kinds of work. Early photographs suggest that there were two different kinds of name panels: one faience and the other mosaic. None of the faience remains and only a few of the mosaic. Lee Stookey, Subway Ceramics

By 2012 station restoration was completed and the plaque was placed on the wall in a glass case, which I hope is scratch-proof.

MYSTERY OF THE OBELISKS