MYSTERY OF THE OBELISKS

Like many other long-time ForgottenFans, Martin Langfield has an almost obsessive enthusiasm for the hidden nooks, crannies and mysteries of New York. That definitely comes through in his new novel, an unusual thriller set in Manhattan. In this guest article, Martin, husband of  ForgottenFan Amy Langfield, describes one of the true-life NY mysteries he came across while researching the plot for “The Malice Box.”

Tales of the New York obelisks

An intriguing mystery links three New York obelisks, each of which has its own tales to tell for fans of city history, lore and trivia. The first is the monument to Thomas Addis Emmet in the churchyard of St Paul’s Chapel on Broadway, right by the World Trade Center site.. 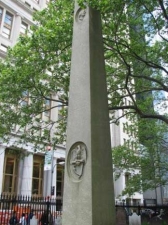 The Emmet obelisk at St. Paul’s

The monument to Emmet was the first of our three obelisks erected in Manhattan, though it is not the oldest. It honors the Irish independence advocate and New York State Attorney General, who died in 1827. (He was the older brother of Robert Emmet, after whom the restaurant and bar at 44th St and 8th Ave is named.) Thomas Addis Emmet does not lie under the obelisk, though.

According to his eponymous grandson, in his 1915 book Memoir of Thomas Addis and Robert Emmet, with their Ancestors and Immediate Family, a cubic chamber lies beneath the obelisk, which was erected in the early 1830s. The obelisk is inscribed with tributes to Emmet in Gaelic, Latin and English. Our man, though, was buried at St Mark’s in-the-Bowery, according to several 1827 newspaper reports. Father Michael Relyea of St Mark’s confirmed this to me by letter after he searched the church records. There are several later Thomas Addis Emmets, including the author of the 1915 book, buried in the family vault at the New York City Marble Cemetery, and our man is sometimes reported to be there too. But his remains appear still to rest at St Mark’s. The 1915 Memoir, consulted at the New York Public Library, describes on pp 530-31 the author’s son’s efforts to find the remains of his great-grandfather by going through vestry records, and confirms that the bones were found in vault 10, set apart from those of the Jones family, owners of the vault. 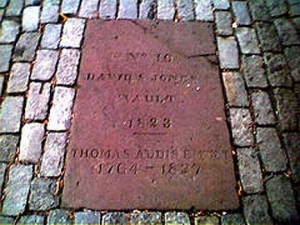 The Memoir says Emmet’s remains were boxed and marked at that time (this would have been shortly before 1915). While Emmet’s grandson expresses his view that the remains should be moved to lie below the obelisk in St. Paul’s churchyard, there is no mention in his Memoir of moving them to the NYC Marble Cemetery, and if they had been moved after 1915 it seems likely there would be a record of it, both at St. Mark’s and at the NYC Marble cemetery.

If you look on the west face of the Emmet obelisk shown above, you will also be able to see – though quite vaguely, these days – the latitude and longitude of the monument, carved into the granite. To what purpose, I don’t know. The obelisk doesn’t seem to be quite accurate, though. The St Paul’s guidebook says the coordinates carved in the stone are 40°42’40”N, 74°03’21”W, but a GPS reading taken when I was researching my book shows the location is actually 40°42’40″N, 74°00’33″W. A typo by the stonemason, perhaps?

Why am I so concerned about the coordinates? Because GPS waypoints in The Malice Box, transmitted to the main character via a fictional device called a Quad, lead him to caches around Manhattan containing keys and clues that may help him stop an impending catastrophe. (They are also a key element in the book’s online game, created by Penguin when it was published earlier this year in the UK.) 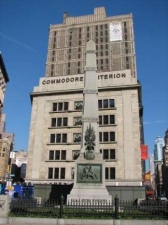 The second obelisk is at 40°44’33.89″N, 73°59’20.32″W – the traffic island at 25th Street opposite the Flatiron Building, where Broadway and Fifth Avenue cross. For my purposes, one of the book’s protagonists, Robert, gets into a fight here with his old college friend Adam, who is part of a plot to destroy New York.

Erected in 1857, the Worth Monument does have a body beneath it, and it is that of General William Jenkins Worth (1794–1849), after whom downtown’s Worth Street as well as Fort Worth in Texas and Lake Worth in Florida are named. Said, perhaps apocryphally, to have personally climbed on to the roof of Mexico’s National Palace to replace the national flag with the Stars and Stripes during the Mexican-American War, Worth may also (according to a distant family member) have been involved toward the end of his career in a plot to overthrow the Cuban government, over a century before the Bay of Pigs.

There is also a relic box, or time capsule, hidden in the cornerstone of the monument.

Spot quiz: which is the only other New York City monument to double as a mausoleum, and why doesn’t it have a public restroom? 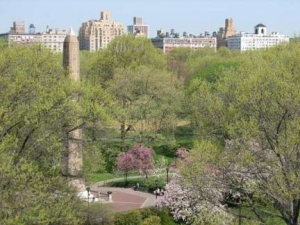 The third element of the mystery is the oldest monument, by far, in New York, but the last of the three obelisks to be erected in the city – Cleopatra’s Needle, or the Central Park obelisk. Situated at 40°46’46.79″N, 73°57’55.35″W, the 3,500-year-old obelisk was originally one of two standing in the Ancient Egyptian city of Iwnw, otherwise known as On (in the Bible) and Heliopolis (the name the Greeks later gave it, meaning city of the sun). 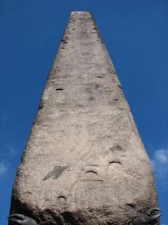 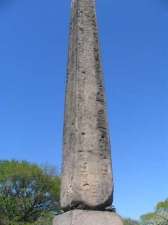 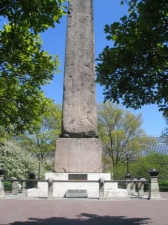 The Central Park obelisk sits atop several sealed lead boxes containing “time capsule” items from the late 19th century such as a copy of the Declaration of Independence, a set of military medals, the complete works of Shakespeare, coins, a hydraulic pump, a guide to Egypt and Masonic emblems. The Freemasons, indeed, say items found under the obelisk when it was moved from its home in Alexandria, where it was taken by the Romans in around 12 BC, demonstrate a link between Freemasonry and ancient Egypt.

The items, they say, included a perfect and rough ashlar or stone, a trowel and a diamond-shaped aperture said to represent the Master’s jewel, all important Masonic symbols. A parade of nine thousand Freemasons, described in the event’s program as “an escort of Knights Templar”, marched up Fifth Avenue for the cornerstone ceremony.

Since the Central Park obelisk was the last erected of the three, in 1881, it is the key to the secret, and indeed the choice of its location created the mystery. 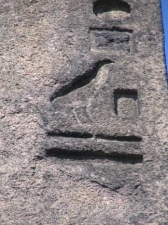 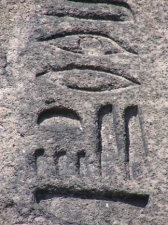 And what is the mystery?

Simply that if you draw a straight line from the obelisk in St Paul’s churchyard to the obelisk in Central Park, it will pass directly through the site of the Worth obelisk at 25th Street — the three obelisks are directly aligned, pointing roughly 29 degrees east of north, slightly off the central Manhattan axis of Fifth Avenue.

To what purpose? I don’t know. Did the officials who chose the location of the Central Park obelisk atop Greywacke Knoll want to make a point? If so, what point? Or did they just choose it because it was a suitably auspicious, high spot that would stop the monument being obscured by all the new tall buildings then being built in the city?

Other locations for the obelisk were discussed too and rejected, such as Union Square, Columbus Circle and Grand Army Plaza. Perhaps a ForgettenNY reader knows more about why Greywacke Knoll prevailed, and what the alignment points to?

Or is it all just a coincidence?

I come up with a possible explanation in The Malice Box, though I shouldn’t give it away here. Suffice it to say that the fate of the city, and maybe even the world, depends on it! 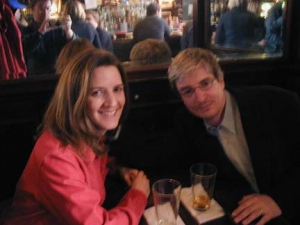 Amy and Martin Langfield visit the Old Town Bar, East 18th Street near the Worth Monument

Photo credits throughout: Amy Langfield, except Emmet’s Vault: Martin Langfield and several Central Park Obelisk shots by your webmaster.
Check out more photographs of key sites in The Malice Box at www.malicebox.blogspot.com).

Now that you’ve seen some of the best monumental obelisks in New York City, you should check out the best shop in New York City for gemstone and QUARTZ OBELISKS at reasonable prices. Check out ROCK STAR CRYSTALS, call 212 675 3065 or go to http://www.rockstatrcrystalsmanhattan.com Rock Crystal Obelisks, Rose Quartz Obelisks, and blue SODALITE Obelisks at at fraction of the price that you will pay at any NYC antique shop. Go to a rock shop for the source!

On channel H2 history, America Unearthed on 1/10/14 is doing special on Cleopatra’s Needle, the Worth Obelisk and the Obelisk by St Paul. Forensic Geologist Scot Wolter uncovers a mystery. I am awaiting this special. It ties in with the Free Masons. Im sure you can catch a re run if you miss tonights episode.
Marge Raymond

There was an obelisk on West 14th Street in the pre-grid days. Greenwich Avenue at that time extended all the way to 14th Street, actually slightly further, and at the end of the road was something which maps only called “the obelisk”. Do you know anything about it?

Of course, no sooner do I ask, than I find it. One error. The info says “4th Street” but you can tell it should have been “14th Steet”.

Built in 1762, this obelisk honored British Major General James Wolfe who died in the Battle of Quebec during the Seven Years War (1754-1763). Erected at the end of “Monument Land,” which is today Greenwich Avenue, at 4th Street and Greenwich Avenue, this obelisk was dismantled sometime in the 1760s or early 1770s for some unknown reason; perhaps it had to do with the growing animosity towards Loyalists-those in the American colonies who supported Britain-and the oncoming Revolution in 1776. This obelisk would be the oldest war memorial in the city if it still stood today.”

Monument Lane began at the present Fourth Avenue and Astor Place and ran westward along the present Astor Place; thence to Washington Square North about 100 feet west of Fifth Avenue, where it crossed a brook called at various times Minetta Brook, Bestevaer’s Kill, etc.; thence to the present Sixth Avenue and Greenwich Lane; thence along the present Greenwich Lane to Eighth Avenue between Thirteenth and Fourteenth Streets, where it intersected the now obsolete Southampton Road; thence northward about 150 or 200 feet farther, where it terminated at the Monument.

The 33 foot high oblisk is not Emmet ‘s grave but a tribute from a grateful city. Emmet was buried in St. Mark’s Cemetary in the bowery & later brought to Glasnevin Cemetary in Dublin where he lies under a High Cross made by James & Willie Pearse, father & brother of Padraig Pearse. Emmet, the exiled rebel (for his part in the 1798 Irish rebellion) returned to Ireland, a hero of two nations.

Does anyone have insight on an inscription on the side of the Worth obelisk saying- By the Corporation of the City of New York 1857.

A corp filed where, owned by whom? Is it still a corp? Taxed? etc

I assumed that Cleopatra’s Needle’s location was selected because it was visible at the new Metropolitan Museum of Art building whose entrance at the time faced south.. There is a photograph of it in the Kravis Wing. It was a prominent location.