As much as your webmaster has explored Staten Island over the years (I’ve probably spent the most time in Queens, followed by Manhattan, Brooklyn, Staten Island and the Bronx in that order) almost every time I head into a previously unplumbed territory on the island, I stumble on yet another headscratcher. I found two in one day in September 2007, in a nebulous area that belongs to no distinct neighborhood near the Mount Loretto sculptures, and further up Raritan Bay near Prince’s Bay. Both are probably very old and will yield their secrets with difficulty.

The first is what’s shown in the title card, a large, 3-story tower in front of what is a relatively ordinary house on Flower Avenue, west of Butler Boulevard and just south of the island’s main seashore drag, Hylan Boulevard.

It looks as if it was built to look out over the bay, which is just a short distance south of the structure. Could it have been a lighthouse? Prince’s Bay has, or had, a more “official” lighthouse nearby.

Meanwhile at Hylan Boulevard and Bayview Avenue, which must still look pretty much as it did a century ago, there’s a concrete base to what must have been a long-lost statue near an entrance to Lemon Creek Park.

There’s only one form of identification on the object: Latin for “mother of grace” –likely a reference to the Catholic teaching of immaculate conception, in which Jesus’ mother Mary was born free of original sin.

Could the structure — and the missing statue –originally have been part of nearby Mount Loretto?

10/2015:  Anthony Morrison: It was the Carriage House/Stable on the old Butler Manor Estate. The tower was actually the windmill. The windmill was used to pump water out of the well and pipe it to the other structures on the estate. 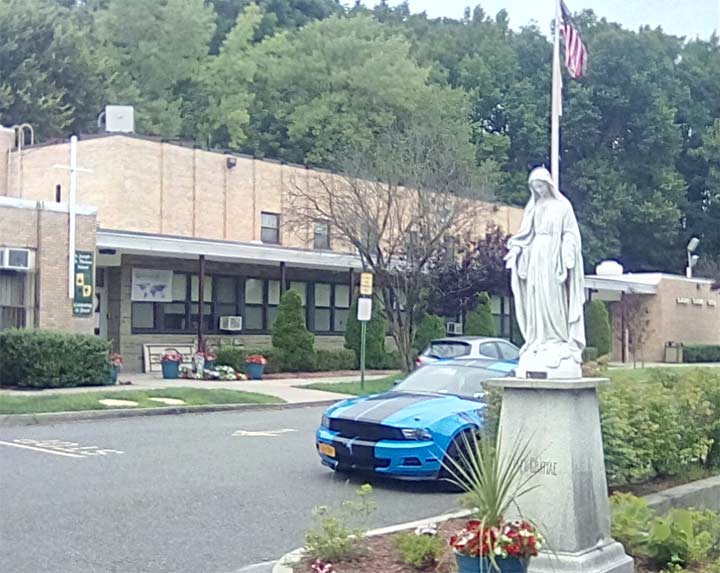 “The statue base was left behind when a Franciscan order of friars relocated, but the place where you photographed the base was not part of the land they left nor its original location.   Apparently the base was placed here when the land belonged to an order of Sisters who ran a summer camp at this location.  However their camp closed, and the land was sold, and not long after your photo, the base was moved once again and taken away by the Parks Department.  It has since been moved to a third and hopefully final location, gracing the front of St. Joseph-St. Thomas school in Pleasant Plains (Maguire Avenue north of Amboy Road) –actually just a few long blocks north of the spot where you saw it.