Walking down 13th Street one day in November 2007, upon reaching 5th Avenue I was amazed to see that a building that hosted one of the premier clubs during my youth appeared to be ready for demolition.

For not quite 13 years, beginning in 1976, the Lone Star was a haven for Texas-style bad behavior in New York City. It was a raucous, often crowded place, with free-flowing tequila, pretty good barbecue, not a few 10-gallon hats and performers like Willie Nelson, Kinky Friedman, Albert King and Roy Orbison. The Lone Star was never exactly in sync with its upscale neighborhood (Forbes magazine was just down the block) and somehow its noisy, nutty, anarchic spirit was well represented by a 40-foot iguana on the roof. NYTimes 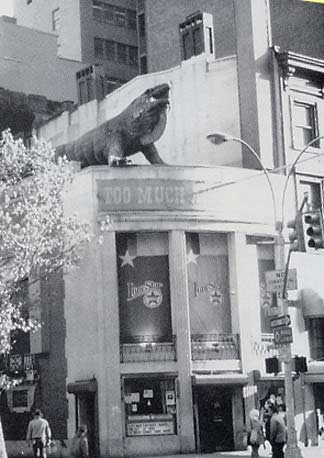 Throughout the 1980s, Iggy was the irreverent guardian of Lower 5th Avenue, a shock the first time you saw her, but in short order a sight as welcome as an old friend. Erected in 1977 over he protests of the Fifth Avenue Association, the iguana was the emblem of the Lone Star Café at the corner of 13th Street – for years the city’s most popular country-western music showcase. The Lone Star’s success indirectly brought on its downfall – it was so successful that its rent more than triples – and the club closed early in 1989. Terry Miller inGreenwich Village and How It Got That Way

For awhile, its sculptor, Bob “Daddy-O” Wade, exhibited it at Pier 25 on the Hudson River opposite North Moore Street, but it hasn’t been there for a number of years. Iggy has been spotted in Fort Worth, TX (see below)

Newspaper ad for the Lone Star Roadhouse, the former branch on West 52nd Street. The Lone Star also used this style for advertising in the Village Voice and other weeklies.

Perhaps the most fascinating story on the recent New York club scene has been the success of the Lone Star Cafe, at Fifth Avenue and 13th Street (242-1664). Just a few years ago, country music couldn’t seem to find a toehold in Manhattan. Then the Lone Star, working in conjunction with WHN, the country radio station here, began to book prestigious names. More recently, it has broadened its booking to include rock, soul and the blues, yet it hasn’t lost its character. The place is full of amusing Texas atmosphere, but its layout seems inappropriate for a successful, big-time club. No matter – the biggies all stop here now, and everybody seems to have a lovely time. This week the offerings include the fine modern-day Texas swing band, Asleep at the Wheel, Sunday and Monday. But the big news is the return of the long-missed Roy Orbison, who has recovered from heart surgery. His plangent, pulsing high rock tenor will be heard Tuesday and Wednesday, and every rock nostalgist in town will be there, too. John Rockwell, New York Times, August 8, 1980

When I went past in the summer of 2002, the deli on the ground floor was apparently doing well and the building looked reasonably intact.

At one time, too much wasn’t enough….but apparently, time has said ‘enough’ for the Lone Star’s old locale.

Update: the building burned in April 2006

Update: Iggy has been spotted in Fort Worth, TX