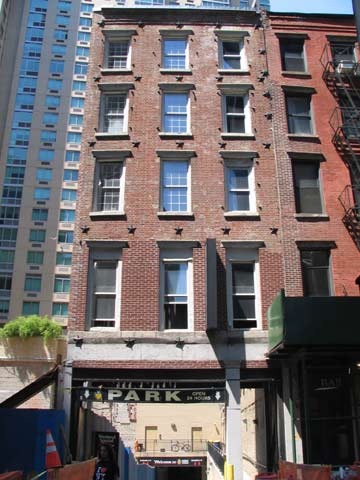 I hadn’t even gone looking for 213 Pearl Street, which is why I didn’t aim my camera at it when I first shot it in late 2006 (it’s the builing off to the right, photo left). I was instead going for 211 Pearl, or rather its facade, which is all that remains of it after an underground parking garage was built in its place. Preservationists had managed to save just the facade of the building.

213 Pearl was the last in a row of three warehouses between Maiden Lane and Platt Street built in 1831 in Greek revival style. Few buildings survive from prior to 1835 in lower Manhattan as a devastating fire sept through the city in December of that year, burning down most Colonial relics of the era. According to the Historic Districts Council, the buildings represented NYC’s first “world trade center” since they shipped dry goods all over the country and internationally.

New York “became like a funnel through which the wealth of the Western world would now have to pass,” according to a television documentary by Ric Burns called “The Town and The City.” Narrow lanes like Pearl Street “were transformed into the first district in the world devoted exclusively to commerce.” HDCVoice

That leaves the facade of 211 Pearl the only remaining 1830s relic. It has a perplexing secret: three triangular shapes in the brickwork may be a symbol, but of what? The warehouse originally was built for soap merchant William Colgate, whose name lives on in the brand.

The 211 Pearl Street website contains a rendering of what the warehouses looked like when originally built., as well as a comprehensive history of mercantilism in the area. 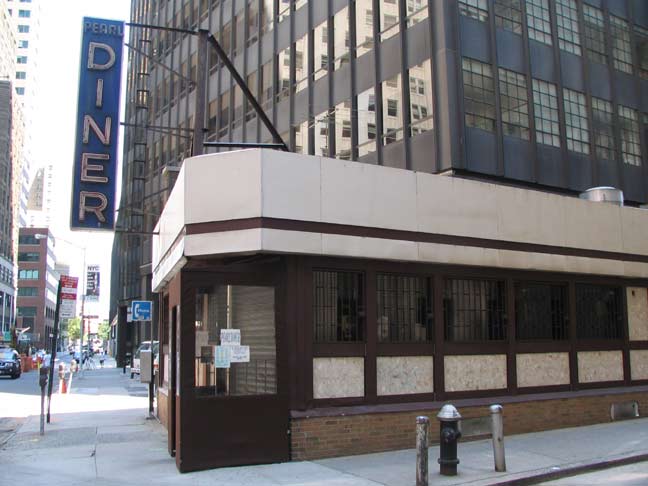 Can the Pearl Diner at Pearl and Fletcher be next on the hit list?

Nothing BRIGHT (FOODS) About It: death of a diner