There’s a riot going on at 30 Daniel Low Terrace, at Belmont Place, in New Brighton, Staten Island. A riot of design and ornamentation and color, that is, at the Ambassador Apartments, built in 1932 by architect Lucien Pisciatta.

The Ambassador has a showbiz pedigree, as well as an architectural one: among its former tenants in the Swingin’ Sixties were the other Ol’ Blue Eyes, Paul Newman, as well as the young Martin Sheen…

Martin Sheen told me that he worked in the St. George Car Wash before theater legend Joe Papp (buried in Baron Hirsch Cemetery) gave him his break. Eric Bogosian, Meryl Streep, Sheen and others would return to this borough to bury him. While living here, Sheen said his son, Emilio Estevez, was born on the living room floor of their apartment in the Ambassador building in St. George. —Maureen Seaberg 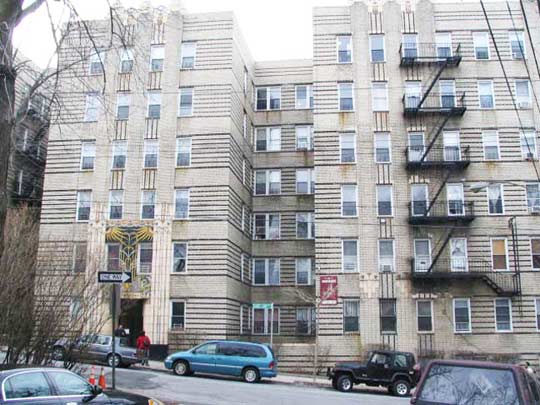 The 6-story building stands out in New Brighton, a hilly area that defied any effort to lay out a street grid; the streets are in crescents, curves, and circles. Much of the architecture dates to the late 1800s with Queen Anne-style freestanding houses, and apartmnent buildings, here as in the rest of the borough, are relatively rare.

The dominant colors here are blue and gold, but there are touches of white and pink as well in a somewhat Aztec-like motif.

The actual terra cotta may well be from Staten Island’s former Atlantic Terra Cotta Works in Tottenville. (It is remembered by a flag stop on the Staten Island Railway.)

A look at the ornamentation above the first floor windows, and an entrance gatepost at the side of the building on Crescent Avenue.

Curving Belmont Place (named for industrialist and subway financier August Belmont; Daniel Low Terrace is named for a local landowner in the 1800s) contains several beautiful dwellings as well. I’ll return to New Brighton soon to do a detailed survey.